Super Bowl 50 is going to be remarkable for a number of “firsts,” and not just on the field of play.

It is the first time that the NFL’s big game will be played at Levi’s Stadium in Santa Clara. If the Panthers happen to prevail, Cam Newton will be the first-ever quarterback to win the Heisman trophy, National Championship, NFL MVP award, and Super Bowl. And, so as not to leave the oldest quarterback ever to start a Superbowl game — Peyton Manning — out of the stat-fest, it is the first Super Bowl to feature opposing starting QBs that were drafted No. 1 overall.

But the modern Super Bowl has become known as much for advertising and marketing as it has for throwing, catching, and kicking a pigskin. According to the latest analysis by Adobe Digital Index (ADI), released today, we’re about to see another first in how consumers watch the game. In fact, we’ve reached a tipping point.

According to the study, half of those watching sports content will do so using smart TVs, mobile devices, PCs, or a gaming console. For the Super Bowl, specifically, 35 percent of Millennials plan to watch via a connected TV, and greater than 25 percent said they are very likely to download an app to watch.

The “second screen” opportunity for Super Bowl advertisers this year is ripe. A recent Adobe survey found that U.S. consumers are multi-screening regularly, using 2.42 devices on average at the same time.

But there is a superpower within this multi-screen, omnichannel marketing mix that is potentially being overlooked: Email.

While brand marketers are readying their war rooms to capitalize on the next “Dunk in the Dark” moment on social channels this Super Bowl, email could be the route to market worth attacking hardest.

According to ADI, nearly one in three of those aged 35+ (Gen Xers and Baby Boomers) are checking their email during the game — that’s nearly 70 percent more than the Millennials surveyed (ages 18-34). Importantly, the age groups that check email the most are those that have the largest amount of disposable wealth.

But having an audience with available income doesn’t mean anything if you can’t ask them to spend it. Fortunately, email pays off in that area.

VB Insight’s research consistently shows that email still has the highest return on investment of any marketing channel. And personalized email campaigns improve those returns dramatically.

So why is it being ignored by many?

“Consumers are doing so much more on their phones and tablets than checking Twitter in between plays,” Patrick Tripp, senior product marketing manager at Adobe Campaign told me. “They’re using their mobile device to enhance their viewing experience by researching the celebrities and brands, new products/services making their big debut and more. Most importantly — in addition to all of this second-screen activity — they’re checking their email during the Super Bowl.”

Brands, it seems, are forgetting the basics when it comes to a true omnichannel marketing approach.

“Email remains the number one channel in driving revenue for each dollar invested, and yet it appears to be a forgotten channel for Super Bowl campaigns,” Tripp said. “With the right tools, marketers can create more than a spike in social mentions, but actually boost the bottom line by re-marketing in email to create more meaningful, relevant engagements, leveraging insights they already have about the consumers’ interest in the game — from the team they’re rooting for to the brands they’re researching and possible online shopping carts they’ve abandoned.”

So how will this play out for those brands that “got the memo,” and understand that email is fundamental to success this Super Bowl?

“For example, if you’re Amazon and just paid roughly $4 million for a spot on the Super Bowl, you may expect to see an uptick in Amazon Echo sales,” Tripp said. “To encourage purchases, you could send a timely email to prospective customers who searched for the ad, providing a discounted product offer valid only through the game. If you’re a brand or business who stands to benefit from the Super Bowl, the same opportunity in email is true. Imagine you’re a marketer for a large pizza chain and need to manage an influx of orders for halftime. You can send a dynamic email with a digital clock/countdown that continually updates based on wait times for current orders, encouraging customers to get their order in well in advance of halftime.” 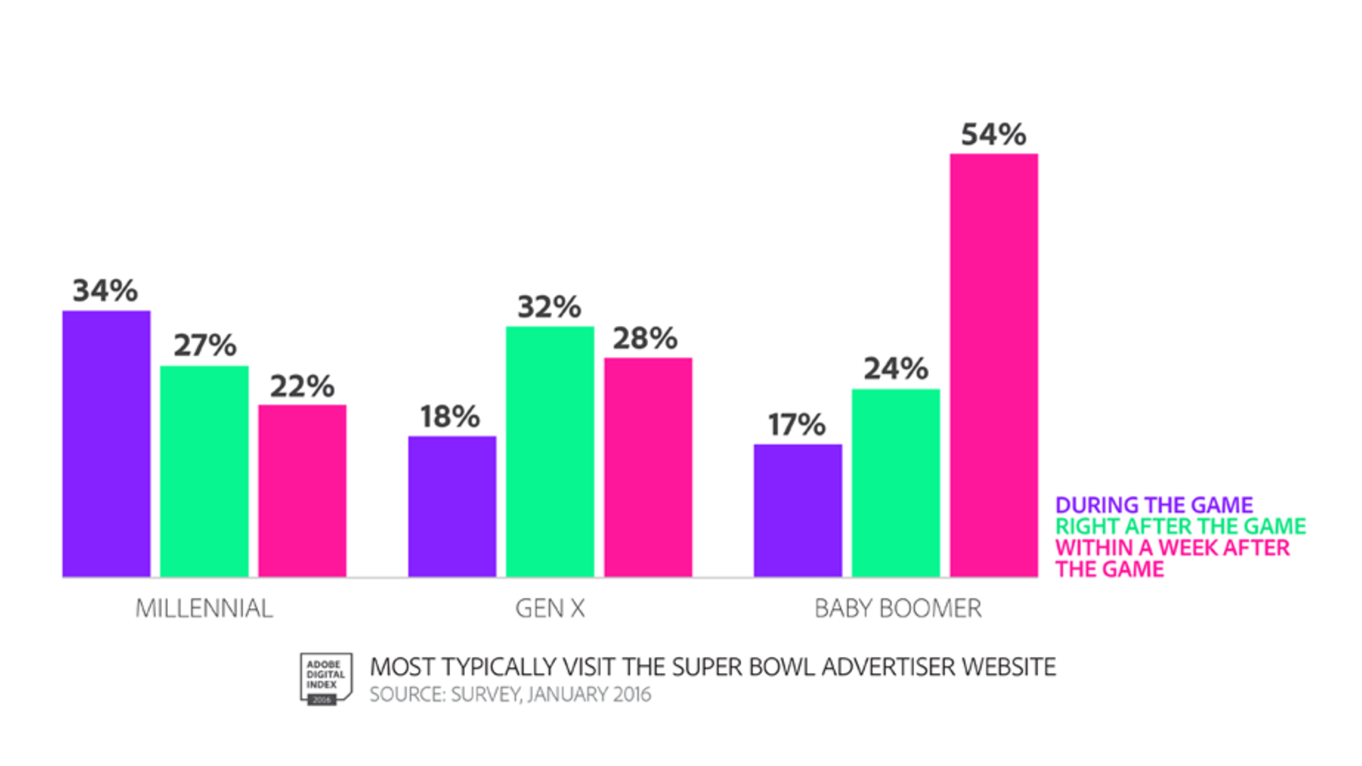 And it isn’t just during the game that all of this marketing activity is important. Top ads that ADI measured last year had an average length of stay on social media of 25 days before brand mentions fell below the previous daily average.

So while Millennials tend to visit Super Bowl advertiser websites during or straight after the game, according to the study, Baby Boomers can wait a week before taking action. An email drip campaign could make the difference between action and apathy.

Why do a high percentage of baby boomers wait so long before visiting an advertiser’s website?

“I think it speaks a lot to the generational differences,” Joe Martin, senior analyst at Adobe Digital Index told me. “Millennials have grown up with smartphones, social media, and the Internet from day one — where each provides a way to engage with something interesting immediately. It is a generational culture that craves immediate gratification and acknowledgment even if it means missing a play or two of the big game. On the other side, I think Baby Boomers are a little more patient and may need an additional touch-point as a reminder to engage after they see an interesting ad.”

More details from ADI’s full report, which takes in data from more than 10 million social engagements, 36 billion TV everywhere authentications, and survey responses from more than 400 U.S. consumers, are available now in this article at CMO.com.