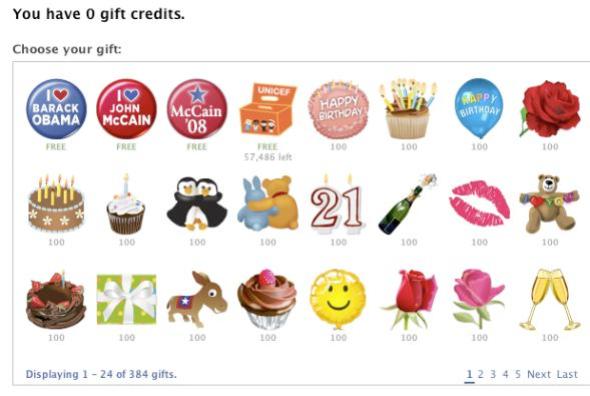 Facebook quietly announced it has taken its paid virtual gifts off the dollar standard, last Friday evening. The company is moving to a universal, floating currency of “credits.” The intent is to optimize paid gift-giving among users at prices that make sense to those who use non-dollar currencies.

With the new credits schema, gifts that have cost $1 to buy now cost 100 credits. By making gift pricing more flexible, Facebook could also start pricing some gifts lower, say at 10 credits, allowing more users with less money to buy each other gifts.

It’s the latest step to bolstering this promising but often under-appreciated revenue stream. Outside estimates have pegged Facebook’s revenue from gifts to be between $30 million and $40 million this year, but the company has said such estimates are “very rough” and don’t fully account for all the revenue coming in via gifts. This revenue could get into the nine figures next year, Justin Smith of the blog Inside Facebook calculates, based on various estimates he tells me he’s heard. Smith is the head product manager at social network application company Watercooler, and generally has his finger on the pulse of what’s happening around Facebook. Combined with what Facebook has told me, his number sounds quite plausible.

Considering that virtual goods are a billion dollar-plus way of making money in China and other parts of Asia — where Facebook is seeing some of its growth — the move away from the dollar makes a whole lot of sense.

Meanwhile, Facebook is still expected to launch a payment system for third-party apps, something it announced last year but has yet to introduce. Virtual goods have also become increasingly profitable for third-party apps; a payments system that stores credit card information would make it easier for users to get their money into these apps.

Of course, as you can tell from the top of this correspondent’s screenshot, above, not everyone has bought into giving paid gifts, yet.