ILike, the music company with popular applications on social networks including Facebook, Orkut and hi5, is making itself a platform — a trend among Silicon Valley web companies these days. Today, it will let other developers access its library of streaming music, so iLike songs can be included within outside applications. So if you have a Facebook game application, you could include licensed music in it through iLike. For example, Social Gaming Networks’ app “Free Gifts” will let you send a song with a virtual gift.

You can make playlists within other applications in social networks, or within customized interfaces on other web sites. Features include a way to display a single song track, and an option to let users edit which tracks are in the playlist. Music sources include Rhapsody’s streaming music service, which iLike obtained access to earlier this year.

To be clear, competitors like imeem have long let users create Flash widgets that feature your playlist — popular on many social networks, including MySpace. ILike’s widgets use HTML and Javascript code for easier implementation by developers within other applications. You can play around with the widgets here.

ILike itself relies on platforms like Facebook’s to reach users — so yeah, this is getting meta. Another example of this phenomenon is Meebo’s platform for instant messaging features, also used by many third party applications.

Already well-connected in the developer community, iLike has continued to manage its relations well. Other partners that will use this platform include Flixster, Watercooler, Connected Weddings, Slide, and Mesmo TV. Google, Evite and TypePad are also integrating iLike’s music.

Meanwhile, five of the top 10 applications on Facebook will include iLike music integration, the company says. It is also one of two “Great Apps,” a designation given by Facebook to third-party applications that exemplify what it considers “good” app behavior. This status means iLike gets special access to users. For example, when a user takes an action on an iLike app that triggers a news feed item, this item is shown at the same frequency within a users’ feed as Facebook’s own items. Developers of third-party applications have expressed concern that their applications aren’t being given equal treatment within the news feed, compared to Facebook’s own items, such as status updates or photos. 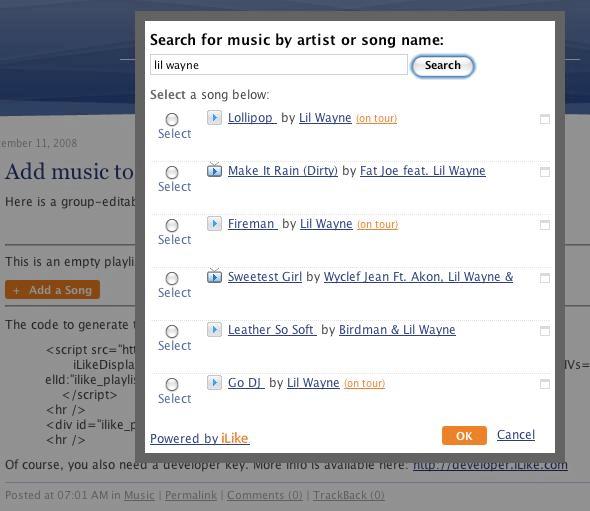 ILike is even partnered with Facebook itself to jointly promote a new album from the electronica group Thievery Corporation.

Meanwhile, iLike says it is by far the leading music application on hi5, and on Google’s Orkut, two other large social networks. It is a poster child for Google’s rival platform, OpenSocial, used by the networks I just mentioned and most others.

The Rhapsody service is a revenue-sharing deal, but iLike is making money in a variety of other ways — ways it’s not saying much about right now. The company gets a cut from referring users to purchase track on Apple’s iTunes and Amazon’s music store. It also sells links to buy concert tickets for a strategic investor in the company, Ticketmaster. It also has deals with ring tone companies. It also has a variety of ads. On the ad front, it recently launched a concert ad service, to help promoters reach fans near live acts. The company offers a central administrative system for artists to manage their presence on its application in Facebook and other social networks.

Seattle-based iLike has close relationships with the music industry, and large acts are using it. But chief executive Ali Partovi says ads for concerts and other forms of revenue will only gradually shift away from traditional media. Artists still rely on multiple promoters if they’re traveling widely, and booking agents as well as artists’ managers often want to approve marketing. This platform is another way for iLike to be everywhere before that change fully happens.