JiWire will deliver the ads to Skytown’s home page, as shown in the mockup below. Depending on how the airline configures the system, flyers may have their choice of Internet access, ad-supported free Internet access, or free advertising content.

For now, no airlines have officially declared that they’ll be using Skytown Center. But Southwest and Alaska have tested Row 44’s system, which connects from an in-flight plane to a satellite. Row 44’s system can connect flyers to the Internet, or give them offline content to peruse.

Advertisers will be able to sponsor content and create branded channels on the system. The system can also provide passengers with localized info about their destination cities.

Why are JiWire and Row 44 talking to tech journalists like me now? Because in-flight Internet access is on the verge of becoming a must-have for airlines. Clickz writer Christopher Heine reports on the field:

During May, Virgin American became the first airline to offer Wi-Fi on its entire fleet of planes. Southwest plans on having Internet available in all of its planes by early 2010. Delta continues to add jets to its one-year-old in-flight initiative, and American Airlines started offering access on about 100 planes in August.

The question isn’t whether passengers will want Internet access, but how much they’ll pay for it. Skytown Center will probably knock the price down to free. 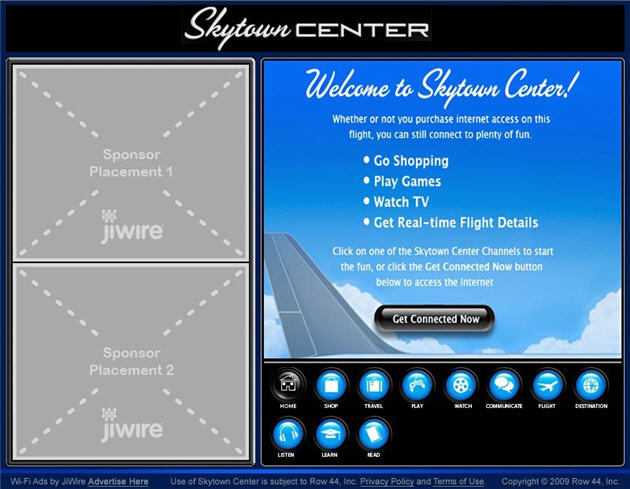