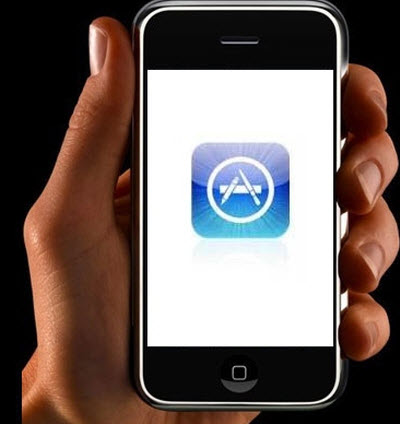 Developers are a critical battleground in the war of apps between Apple and Google. And Apple’s pulling ahead, according to Flurry’s latest stats.

In the second quarter, Apple’s iOS operating system gained support from developers while Android saw a decline, according to Flurry, a company that provides advertising and analytics services for app makers. The battle for developers is an important one as the winning platform is kind of like the feudal warlord who has the most serfs (to put it in language used by Trip Hawkins, chief executive of Digital Chocolate, speaking at GamesBeat 2011 on Tuesday).

In this new age of mobile computing, Apple and Google’s long-term success depends largely on their ability to amass third-party developer support.  Developer innovation improves the way consumers connect with others, entertain themselves, work, and more, all through apps.  The better a platform provider can attract unique and superior content, the more attractive the hardware device appears to consumers prior to purchase, and the more loyalty is created after purchase.

“The mindshare for the Android platform is still vibrant,” said Peter Farago, vice president of marketing at Flurry, in an interview. “But there are more friction points for developers on Google’s platform.” 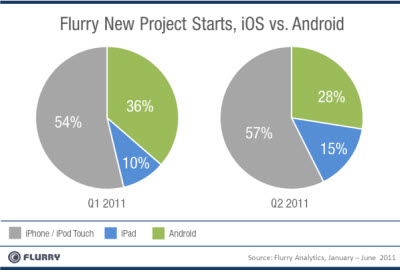 For instance, Charles Hudson, chief executive of Bionic Panda Games, said in a panel at GamesBeat 2011 that Google doesn’t have nearly as many credit card numbers logged as Apple does (Apple has them thanks to many years of iTunes purchases). That means fewer customers are ready to buy items in games on the Android platform, compared to Apple. But Hudson said he would glady take advantage of a marketing incentive program where Google would reward him if his game inspires a user to sign up for Google Checkout.

Overall, Farago said Google tends to be six to nine months behind Apple in such advances for developers, as Apple had a longer head start. Apple launched the iPhone in 2007, while the first Google Android phone launched at the end of 2008.

Last week, Apple reported it had sold a cumulative 200 million iOS devices and 425,000 apps are now available in the App Store. Total downloads are above 15 billion. At the same time, Google’s more open Android OS has the support of lots of phone makers. Google said Thursday that Android device activations are exceeding 550,000 a day. Google has more than 200,000 Android apps and it reported 4.5 billion downloads as of May. Flurry has decent data since its analytics are used by 45,000 app makers across 90,000 apps.

Apple probably got a surge in the second quarter thanks to new support from Verizon and because it launched the iPad 2. Full told, the iPad has sold more than 20 million tablets to date.