It is January 7, 2016. By now, around 43 percent of you will have fallen off the health and fitness bandwagon. That cinnamon bun was just too tempting, wasn’t it?

But in the weeks leading up to the new year, you were clearly up for the challenge. How do we know? Social media engagement analytics.

Today, Engagement Labs has revealed, using its Total Social tool, the vital statistics of fitness apparel, and diet/weight loss programs, for both online and offline conversations. And the results tell an interesting story, especially when it comes to how smaller brands are competing with their much larger peers.

Before we dig in, a word on methodology. Total Social combines Engagement Labs’ eValue social media measurement tool with TalkTrack, a leading measurement source of word-of-mouth conversation from the Keller Fay Group (an Engagement Labs company). Its eValue score is composed of a series of metrics and key performance indicators (KPIs), including Engagement, Responsiveness, and Impact, which is benchmarked against 100,000+ handpicked and verified brands.

So what is the tactic that makes the difference for brands with fewer followers?

Not broadcasting, as demonstrated by around 70 percent of brands that use social media. Not advertising. But community-led content. 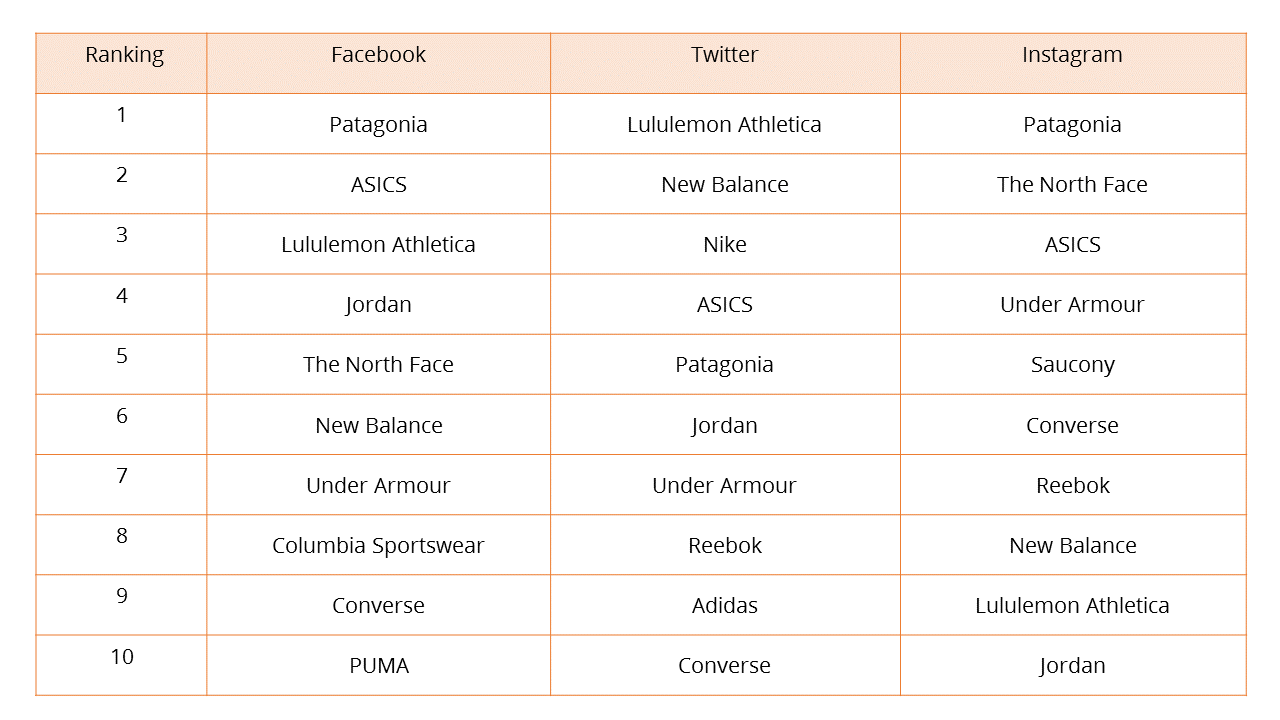 On Facebook, you can see that Patagonia ranks first. In fact, it has the highest engagement score of all brands measured. Patagonia also had the most active user base, as well as the largest number of likes and shares per 1,000 fans. Those figures become much more attractive when you map out the follower numbers of the top ten fitness apparel brands on Facebook. 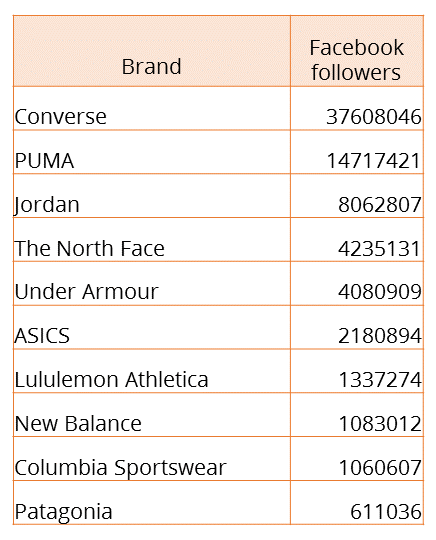 How did Patagonia manage to gain the top spot, while languishing in tenth place for its number of followers?

Through posting user-generated content and including its community in its social media presence. Images of natural landscapes, stories from adventurous users, and quotes from satisfied customers all helped to ensure the brand punched well above its weight.

User generated content provides brands with an additional avenue to engage and interact with their followers,” Bryan Segal, CEO at Engagement Labs told me. “Leveraging user content and repurposing for owned channels not only engages the individual whose content you’re using, but showcases your product being used in real life, by real consumers. This tactic helps to build trust among your community, especially among the millennial generation, where a study by Ipsos MediaCT and Crowdtap found that peer recommendations, such as user-generated content, are more trusted than that of traditional advertising.

That tactic clearly works well for Facebook, but what about for other networks?

On Instagram, Patagonia wins again, despite having 4X fewer followers than Jordan, and 2.3X fewer than Converse. Once again, user-generated content helps it succeed.

Lululemon Athletica ranks highest for that social network. The tactic that works best for Twitter? Responsiveness.

Lululemon scored the highest for both engagement and responsiveness, with the highest response rate of the group. The fitness apparel brand’s most engaged posts were motivational/inspirational tweets aligned with their brand’s reputation for positivity and happiness.

So while eight out of ten retailers will snub you on social media, not bothering to answer your digital call for help, Lululemon has learned that — on Twitter especially — being responsive to the consumer is a winning strategy.

What works in social:
Social media management: Tools, tactics … and how to win
is available now on VB Insight for $499,
or free with your marketing tech subscription

With diet and weight loss plans, we see similar patterns play out across Facebook, Twitter, and Instagram. Here are the top ten brands in each network: 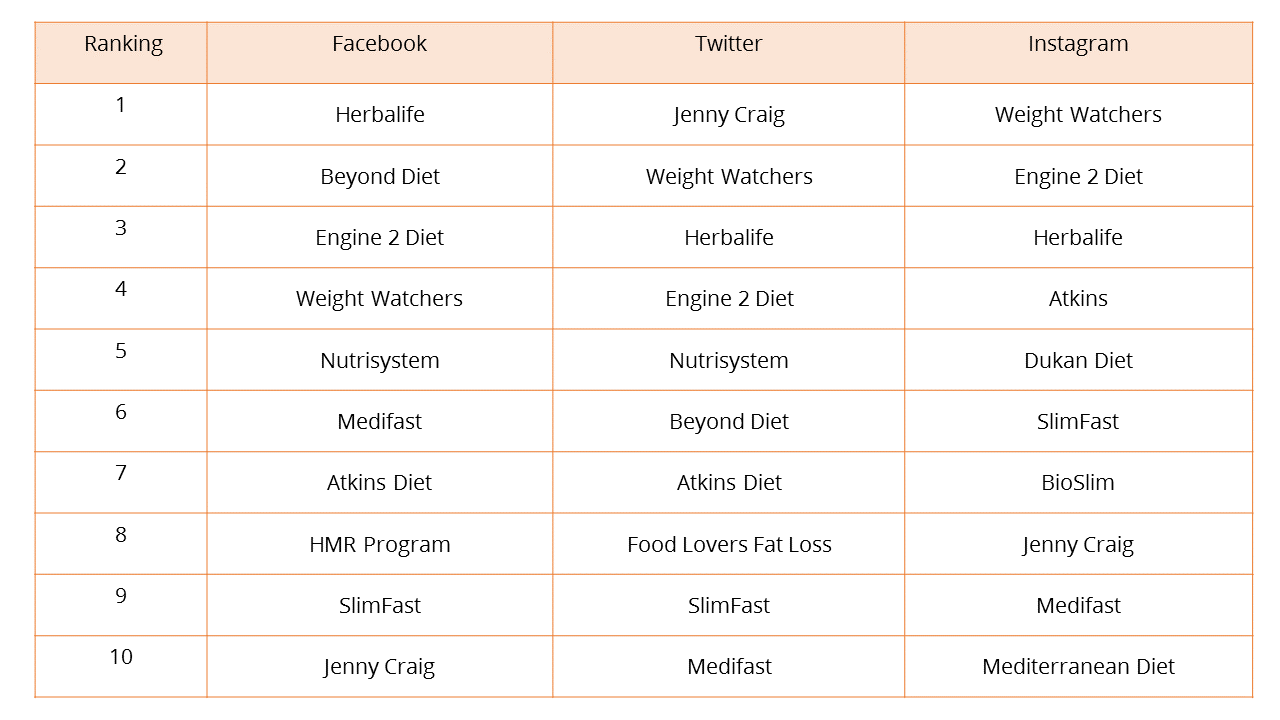 Herbalife has a significantly higher following than other brands on Facebook (2X more likes than the next competitor, Beyond Diet), which helps them easily win the day. Engine 2 Diet, on the other hand, has a following that is more than 20X smaller than that of Herbalife, and has 10X fewer followers than Beyond Diet. So how did it manage to gain third place for Facebook, and second place for Instagram?

Again, it comes down to community. Engine 2 Diet ranks first for Engagement with posts — asking users direct questions regarding their fitness goals, and sharing stories from successful users of the diet.

And what helps Jenny Craig take the top spot on Twitter? It should be no surprise to learn that it ranks first for, you guessed it, engagement and responsiveness. It’s diligent about posting content with its returning celebrity spokesperson — Kirstie Alley — as well as tweeting articles that help with the weight loss process, and fans, in turn, resonate well to the brand’s content. Plus, the company makes a point of answering consumer questions quickly, proving itself to be responsive.

Engagement Labs’ data tell a clear story. On Facebook and Instagram — for fitness apparel brands, and those providing diet and weight loss solutions — user-generated content appears to be the key to success. And on Twitter, response times, coupled with engagement, help win the day.