Epic Games and Unity Technologies are in a battle for the hearts and minds of game developers. At a time when game budgets are soaring — even for mobile titles — developers rely on the engine makers to reduce their production costs and make it easier to craft works of art that rival cinema. The people behind the engines are racing to create better and better versions of game-making tools.

Epic has placed its bets on C++, a general purpose programming language that is both widely known and can give developers access to high-performance hardware in an efficient manner. Ray Davis, general manager of Epic Games’ Unreal Engine 4 business, is charged with the task of helping the company evangelize its technology to game developers.

His latest pitch: the Unreal Engine 4 is great for making virtual-reality applications. Epic has demonstrated this with numerous VR demos, and it is also making its engine available for free at its most elementary level.

We caught up with Davis at the Casual Connect game conference in San Francisco last week. Here’s an edited transcript of our conversation. 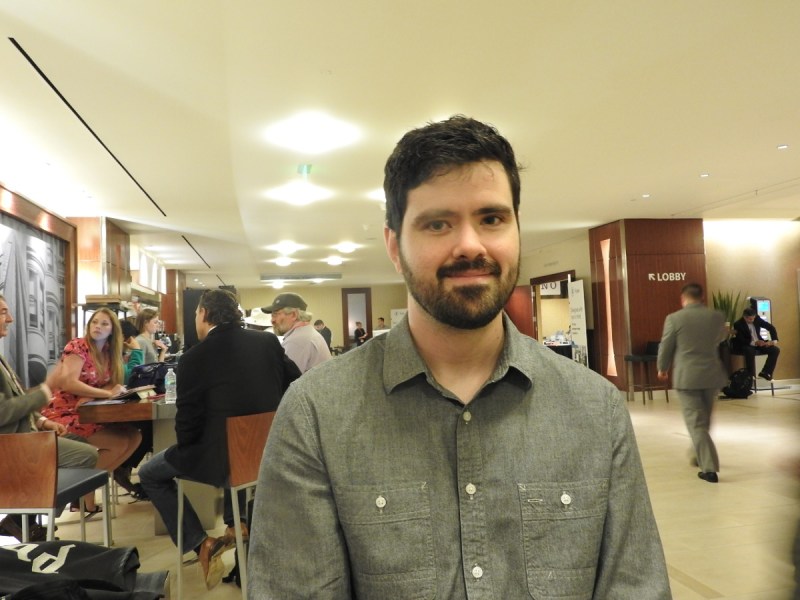 GamesBeat: At ChinaJoy, (Epic Games CEO) Tim Sweeney talked about the engine wars and the advantage of having C++ throughout the entire chain.

Ray Davis: It’s an interesting challenge. The tradeoff is between lowering the barrier to entry — so people can build something quickly — but also still making sure you have enough performance there that you can ship your game. Fundamentally, C++ is the reliable choice in the long term. It’s definitely for the expert level, where performance is critical, but it takes more investment to be successful there.

If you want to build something from scratch without being a programmer, that’s where Blueprints [visual scripting system] comes into play. That’s part of what I’m talking about tomorrow: how much a visual programming language helps people with no programming experience build something and then redefining your production pipeline so that people with ideas can rapidly iterate by themselves. Then, they can say, “Hey, this is what I was talking about.”

Previously it would be an awkward conversation between a designer and an engineer. “Hey, I want to build this awesome thing. Trust me!” Then, the engineer has to buy in and build it.

GamesBeat: Sweeney also mentioned how scripting languages can get in the way of debugging. Unity is apparently different in its approach?

Davis: They’ve taken C# as a big part of their process. That being said, one of their more popular plugins is a visual scripting tool. A lot of people either don’t have the interest or don’t feel capable when it comes to text programming. It’s important to offer both options. You see a lot of teams go back and forth. It goes back to the question of what’s the best tool for the job. What are you trying to build and who is helping you build it? 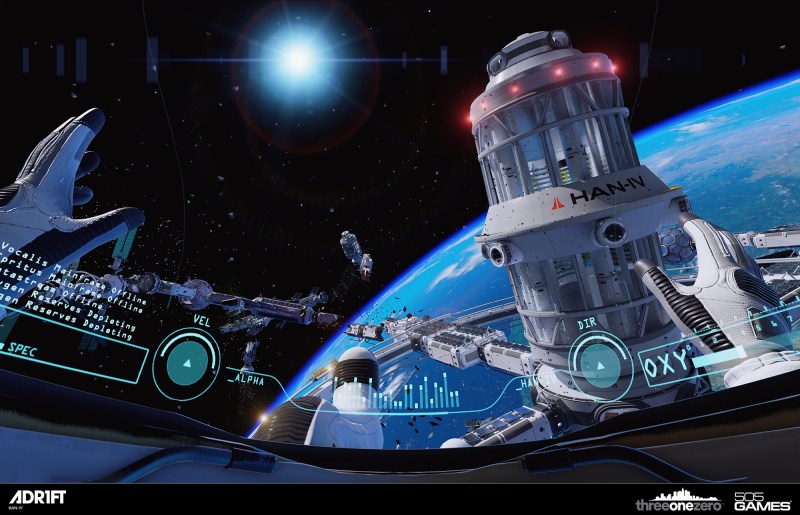 Above: Adr1ft is made with Unreal Engine 4.

GamesBeat: Do you find that this is a part of the sales pitch that works, or is it just Sweeney’s view of technology?

Davis: There’s probably a very blurry line there. [Sweeney] is a very smart guy all over the place. My background … in a former life, I was a programmer on Gears of War. Now, I’m focused on the broader picture. I want to help people feel empowered to make these things.

With VR and AR [short for augmented reality], it’s interesting because we see so many more people who want to be part of this platform. It’s not even about games, necessarily. It can be about telling a story, making a movie. We’ve seen architectural visualization. For me, growing up, I loved games. That’s why I got into this. But the act of making something can be even more compelling than consuming it. I want to help more and more people realize that.

GamesBeat: What’s your own talk about on virtual reality?

I’m talking about that, some of the challenges and learnings there, and then explaining how Blueprints and other visual tools have helped us move quicker in that space versus a more traditional effort where we have a full team of engineers and artists and designers. Now, one or two individuals with a crazy idea can go off in the corner and make that happen. Then, you can pile on to make that bigger.

GamesBeat: You guys seem to be doing quite a few of these demos in VR.

Davis: It’s easy to be excited about it. A lot of the guys, especially on the game side, there’s a bit of fatigue. We’ve mastered the art of putting pretty pixels on screen to some extent. Obviously, there’s still a ways to go, and I don’t want to trivialize it. But forms like VR are really interesting because there’s this whole prospect of being able to build things I couldn’t build before. Much like smartphones introduced a whole new series of applications. Once we’re able to design for that — finding out what touch input is good at and bad at — versus the initial onslaught of just translating ideas from PC, we’ll see something similar with VR.

GamesBeat: Is there a notion that maybe VR will give way to AR, or will VR go on alongside AR?

Davis: We’ll see a convergence there. It’ll be on a per-experience basis, whether you want to block out reality or integrate with it. If you’re watching a movie, you have no need of reality. The whole point is to remove that, so you can be fully immersed. Conversely, sometimes a recipe thing is better served as a hologram on your kitchen table.

GamesBeat: Hollywood is doing a lot more with VR. Lionsgate had its announcement last week. Are the people there basically using Unreal themselves?

Davis: Microsoft is using Unreal for some of their projects. We’re seeing a ton of developers use it in the space. Almost every one of the Oculus demos you’ve seen today was probably built in the Unreal engine. 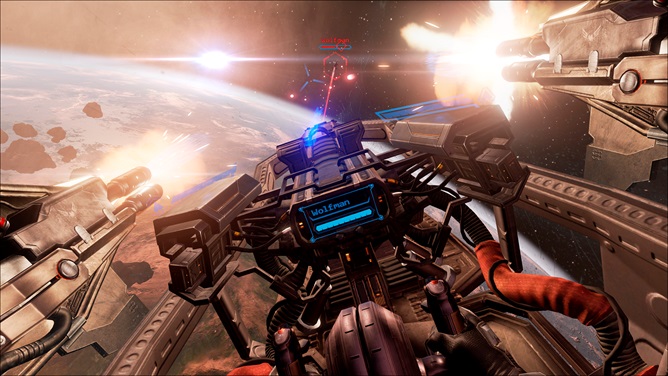 Above: CCP’s Eve: Valkyrie is a virtual reality title built with Unreal Engine 4.

GamesBeat: By 2016, some have suggested that we’ll see rapid adoption and really good availability of 3D on smart devices and tablets.

Davis: That’s a little more optimistic than I am.

GamesBeat: And Web graphics as well. All these things are supposed to be coming out in 2016.

Davis: We just saw DirectX 12 coming out in Windows 10. [Apple’s] Metal is out there. One of the things people talk about in the VR space is the same level of standardization. Everybody wants to be unique, obviously — here’s our special thing — but the reality is that the time developers spend porting their experiences to this platform and that platform, that’s less time they spend making something interesting.

One of the things we make sure with the Unreal engine is that we support all the modern platforms and make it trivial for you to say, “Yes, I want motion tracking input; I want speech recognition.” You build your content once, and then, you can cater to each specific platform as you go.

GamesBeat: Part of the argument around the engine wars is that if technology advances rapidly and you have the high ground as far as technology goes, you should have the better position in the long run.

Davis: I don’t know. I always have a little bit of resistance to the notion of an engine war. It’s a renaissance, right? More than ever, you can click a button and download amazing technology. Looking forward, one of the foundations of [Unreal Engine 4] was that we didn’t want to build an engine to last five years before we had to do [Unreal Engine 5]. We’ve architected it in a way such that this will survive the test of time.

VR has been a great proof point for that. All this new technology, we didn’t account for it when we started [Unreal Engine 4]. It’s coming online very quickly, and we’re able to adapt to it and plug it in and see some really compelling experiences.

Davis: That’s very inspiring to me. I always use Minecraft as the great example. Through the act of play, people are creating. It’s the same magic we had with sandboxes and Legos when we were kids, taken to a whole new level. 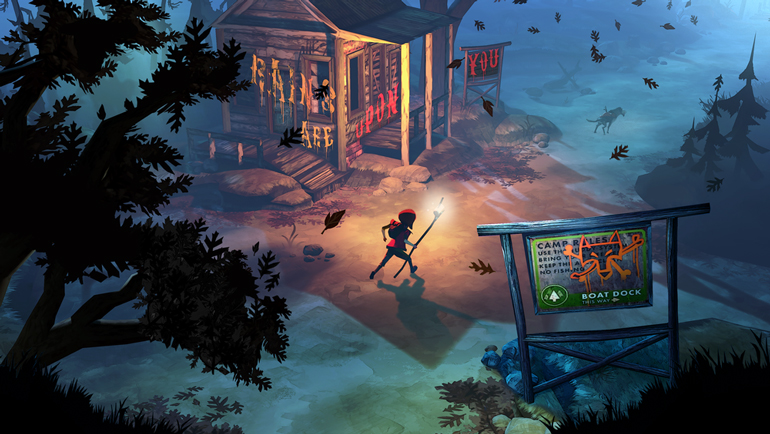 Above: The Flame in the Flood is being made with Unreal Engine 4.

GamesBeat: The ease of use in new technology, how rapidly is that enabling some of that?

Davis: This is the furthest we’ve ever gotten with accessibility in the engine. Not only making the tools understandable and intuitive, but also making sure there are great learning resources and tutorials to help anybody start from nothing and get to something. I’m starting to believe that anybody could sit down in an evening and get something running in VR. That’s pretty remarkable, when you think about the amount of technology involved.

That being said, I think we have a long way to go to where anybody who doesn’t have that level of expertise could intuitively start building their own content. But it is possible. Minecraft, again, is that primordial-soup point. The funny thing is, one of [Sweeney’s] first games was called ZZT. It goes back to the early roots of modding. To this day, there’s a little community around that original game because you can mod it and create your own experiences. Time and time again, all the way back to Unreal, mods [give] so much more life and opportunity to players who love the game and want to take it further. 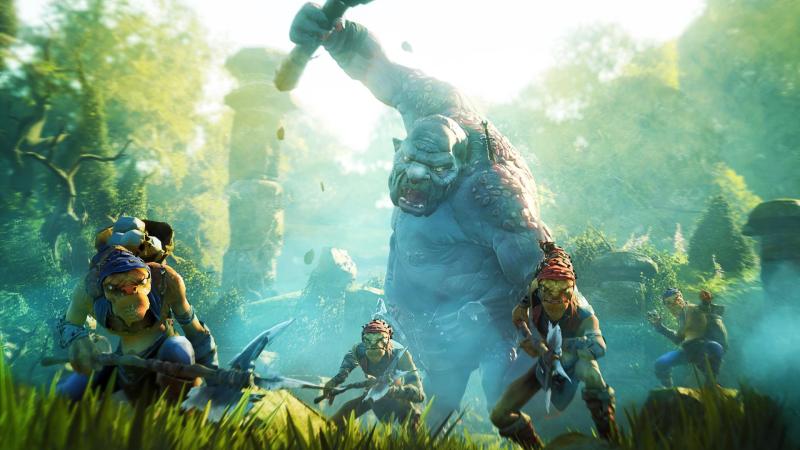 Above: Fable Legends is being built in Unreal Engine 4.