BARCELONA, Spain – There are still 4 billion people in the world who are not online.

Figuring out how to address that problem and why it matters was one of the main themes this week at the Mobile World Congress in Barcelona. But while the global telecom industry has embraced this as one its most urgent issues (and opportunities), it’s worth recognizing that this is due in no small part to the significant efforts of Facebook and Google.

Both companies began talking about this issue a couple of years ago in a big way. And certainly when tech giants like Google and Facebook start making grandiose statements about how they want to make the world a better place, deep skepticism is warranted.

Tech companies are fond of leaning on digital utopianism to convince us that they’re doing something more vital for humanity than just selling dog food online. And in the case of companies that make money from our personal data and advertising, it’s in their long-term business interest to grow the pool of people sharing information over the Internet.

That said, this week Facebook’s Mark Zuckerberg and Google’s Sundar Pichai came to Barcelona in large part to talk about these efforts, and to rally more support for them. And perhaps the best evidence of the significant impact they have already had is the conference itself. Over the course of four days, about a dozen panels will cover the topic of how to connect the next 1 billion people to the Internet.

During his keynote address on Monday, Zuckerberg talked about how he had been deeply moved by villagers he met who lived in India. They had petitioned the government to bring connectivity to a region near them — and then moved their entire village to that location so they could have Internet access.

“The thing that’s so striking to me is the lengths people will go to in order to get connectivity,” he said. “There are stories like that all over the world. And it’s very inspiring to see.”

For the keynote, Zuckerberg shared the stage with the heads of three telecom carriers. That included Jon Fredrik Baksaas, chief executive of the Norway’s Telenor Group, and who is also chairman of GSMA (Groupe Speciale Mobile Association), the industry trade group that organizes MWC.

Baksaas said Facebook has brought an excitement to the topic in a way that governments and telecom companies had not. While an earlier panel about regulations had been lightly attended, he noted that the Zuckerberg session had required overflow rooms to accommodate attendance.

During the hour-long keynote, Zuckerberg went to great lengths to show respect and deference to telecom companies. He was so effusive in his praise that he probably said more complimentary things about telecom carriers in one hour than the average person would say in a lifetime.

“I’m the one who’s talking about this new model that we’re working with so many partners to put in place,” he said. “But the reason we’re in Barcelona is because the people who are part of this industry are the ones who are leading the charge.”

Zuckerberg also spoke at MWC in 2014, not long after he had announced the Internet.org initiative. While the Facebook-led group’s approach is complex, the basic idea is that Facebook creates an application that includes Facebook and some other basic services. The telecom partners then offer the Internet.org application along with free Internet connectivity to convince people who are not connected to get online. 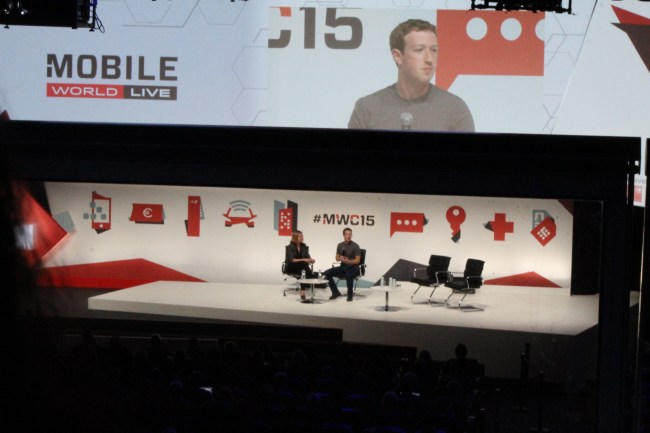 While there are a lot of reasons people might not be online, part of the issue is cost of service, cost of devices, but also a lack of interest or understanding of why it might be important to be connected. The hope is that the wild popularity of Facebook serves as an incentive for some of these people to get online where they will eventually convert to paying customers over time.

There is wariness on the part of telecom operators about working with Facebook because they fear that services like WhatsApp are going to hurt their business by killing text messaging and offering free voice-over-Internet-Protocol (VoIP) services. Facebook’s argument is that over time, people will consume and pay for more data and that those revenues will replace and hopefully exceed whatever telecom carriers lose in the short term.

Zuckerberg emphasized over and over that he knew that for Internet.org to succeed, it needs to help telecom carriers make more money so they have the resources to continue to invest in building infrastructure. For the moment, Facebook even strips out the VoIP services within the Internet.org app as a part of a compromise with its telecom partners.

“We’re really serious about this,” Zuckerberg said. “But we want to work this out so it’s profitable for our partners.”

He’s had some success in making that case. Christian De Faria, chief executive of Airtel Africa, was also on the panel. Airtel has deployed the Internet.org service in four of its African countries and so far, he said the number of users has increased, and so has the company’s revenues.

Still, he said, the company would proceed cautiously with Facebook: “It’s like the milk on the fire and you watch so that it doesn’t boil over.”

While Facebook and Google’s efforts are sometimes depicted as rivals, in fact they are tackling different parts of the issue. In the short term, Zuckerberg notes that Internet.org is targeting the huge portion of people who live within range of connectivity, but are not online.

Google, by contrast, is looking at the portion of the world that doesn’t have any connectivity and trying to figure out how to get it to them. Its various efforts essentially involve creating some kind of backbone to remote regions which telecom carriers would then use to deliver their services. In that regard, Google also needs more friends in a telecom industry that has often complained that its services like YouTube are huge bandwidth hogs.

“At Google, we want to work on things that make a difference in people’s lives,” Pichai said during his keynote. “We are taking the same approach we take with all our products. We are working on a large-scale approach.”

The effort that has gained the most attention is Project Loon, the concept of floating networks of balloons over a region that deliver Internet connections.

Pichai said two years ago, Google could keep the balloons in the air for five days. Now they’re up to six months. And the wireless connections are far faster than they expected. The company is now in an expanded testing phase with telecom partners like Vodafone in hopes of rolling out the service soon.

Those efforts are being complemented by Project Titan, which uses lightweight solar-powered airplanes to carry small cell towers. Pichai said Project Titan will begin taking its first flights in the next few months.

On the ground, Pichai said the projects would work in tandem and lean on Google’s computing power to manage their flights and coverage.

“You can imagine a constellation of balloons and planes which we can stitch together to create a mesh of flying cell phone towers,” he said.

Above: One of the solar planes from Google’s Project Titan

The third part of Google’s effort is Project Link, which has built a fiber backbone in Kampala, Uganda. Unlike its Google Fiber project in the U.S., Google is not selling the service directly to customers, but rather partnering with telecom providers in Africa who then sell access to consumers and businesses.

Pichai said the effort has been successful and that “we’re going to roll out Project Link to many more countries in Africa this year.” 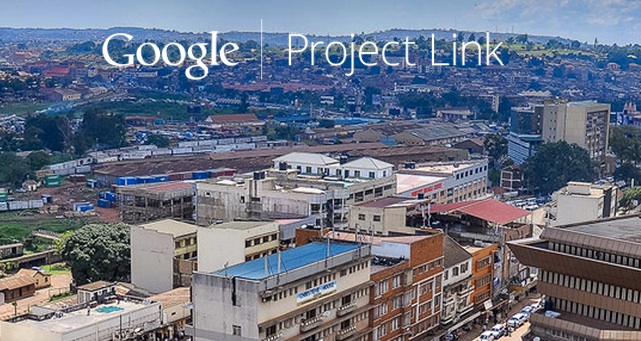 Closing the digital divide will likely take years, if not decades. But if these efforts only amount to the very first steps, Google and Facebook deserve a measure of credit for making sure they were at least taken.