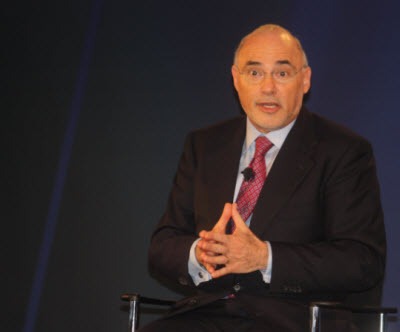 Hewlett-Packard made some stunning decisions today that will affect its strategy for a long time to come. The announcements raise questions about what exactly is going through the mind of its chief executive, Léo Apotheker, and just how patient he will be when it comes to axing or keeping parts of the company that aren’t doing so well.

On the one hand, Apotheker has shown no patience for failure.  The poor launch of the webOS tablet computer, the HP Touchpad,  prompted him to kill the program.

On the other hand, Apotheker said that despite headwinds, HP will continue to support the Itanium-based server business. Intel builds the Itanium microprocessors for high-end supercomputers and HP has partnered with Intel on Itanium since 1994. The program hasn’t lived up to expectations, but it remains a huge bet within HP’s strategic enterprise business.

It appears that HP is willing to stick it out in the Itanium fight, but it is pulling the plug on webOS after just four quarters, even though it is strategically important to HP’s future in the vast mobile computing market. It seems like a contradiction and one that has been left unanswered so far. Presumably, HP was going to face the prospect of long-term losses in webOS, compared to a much smaller cash drain in the Itanium server business. Apotheker explained his moves in a conference call with analysts this afternoon.

Regarding Itanium, Apotheker said, “In business critical services, we think the Itanium platform is the best in the industry. We are fully committed. We are doing everything we can including pursuing legal action against Oracle’s “anti-competitive behavior.” (Oracle has pulled the plug on Itanium software efforts because of its declining demand in the market; HP accuses Oracle of trying to torpedo Itanium in favor of Oracle’s own hardware, acquired from Sun Microsystems).

About webOS, chief financial officer Cathie Lesjak said, ” About a year ago, we made a bet on webOS and set clear metrics and milestones. The sell-through of the product was not what we expected. Our intention was to solidify webOS as a clear number two for mobile platforms. It quickly became clear that pricing parity (pricing the HP tablet at the same price as the Apple iPad)” would not work and HP cut the price of the tablet by $100. Lesjak said that continuing to invest in webOS would take one to two years and increase risk without a clear return.

Apotheker said that the popularity of tablet computers is taking its toll on consumer PC sales and the TouchPad is not gaining momentum in the market. He said that the webOS was critically acclaimed but the products weren’t getting traction.

This means that HP is in a fix. It is still backing Itanium in a sector of the business it intends to keep. And it is exiting the mobile computing market, even though it knows that Apple has become more than six times more valuable than HP because Apple has succeeded in mobile computing with the iPhone and the iPad. HP is giving up in one market because it has lost the will to fight, and it is sticking it out in another tough market because backing out of a bet that began in 1994 is too hard to imagine.