InAppFuel has figured out the humble “mini game,” or a game within a game, is the path to monetization. The New York company has created a way to plug mini games into mobile apps and improve the monetization by 15 percent to 30 percent. 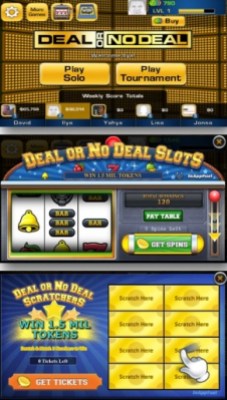 Above: Deal or No Deal mini game

Its latest partner is iWin, which is using InAppFuel in its Deal or No Deal mobile game. InAppFuel provides a software development kit (SDK) so that developers can plug mini games right into their existing apps. It works with any mobile game or existing virtual currency. The app maker can integrate slot machine or scratch-off contests into their titles within an hour, according to InAppFuel.

InAppFuel is also launching a Unity plug-in on Thursday that will enable easier integration.

Mini games drive in-app purchases in top-grossing titles such as Zynga Poker, Electronic Arts’ The Simpsons: Tapped Out, and PopCap’s Bejeweled. But smaller developers don’t necessarily know how to build these mini games or how lucrative they can be by keeping users engaged and retaining them longer. And that kind of behavior leads to more in-app purchases, which strengthens revenues for a given app. In the case of slots or scratchers, a user will get so many free spins or tickets a day. If they want more, they have to buy them.

InAppFuel was started in 2012 by Ilya Nikolayev, Georgi Darakev, and Andrew Merkatz. The company has 10 employees, and it is self-funded.

“Our mini games level the playing field for small and medium size developers,” said Ilya Nikolayev, co-founder of the company.

The founders were previously app and game developers who created the Family Tree app on Facebook in 2007 and then launched it on mobile. They built more than 25 mobile games and sold their company in 2011. They seized the chance to create InAppFuel and monetize mini games.

Other monetization firms such as Tapjoy also create mini games. Those games will take the user to an advertisement, while InAppFuel keeps the user inside the main game and leads to monetization for that game.

“The monetization and retention benefits are huge, and we are seeing a terrific response from the developer community,” Nikolayev said.

The platform works with iOS now and an Android version is coming soon.