After much suspense, media conglomerate IDG has relaunched its brand Industry Standard.

This time, Industry Standard is a site that lets you predict the outcome of future events. It lets you bet virtual money (“Standard $”) and awards you prizes for doing well. For example, it lets you bet whether Yahoo will accept Microsoft’s acquisition bet (see image top left), or whether Yahoo will ever launch its GPS platform Fire Eagle. It has a leaderboard to show who is doing well, and lets people connect with friends to see how they have bet. There’s an FAQ here.

It’s surprising how many people I run into these days who don’t remember the old Industry Standard (usually, folks I meet who are in there 20’s, even in Silicon Valley, have never heard of it). The Standard was a technology magazine that rose to fame during the Internet boom for its slick, often breathless coverage of the age’s Internet companies. It expanded to such a great girth that it was almost too heavy to carry around — people complained it was like a phonebook. It went poof after the Internet bubble burst, when advertising dried up and left it with no cash (here’s an account of the saga). It’s somewhat symbolic that the site is launching now, on the cusp of another possible downturn in the economy (though it’s unclear how strongly online advertising will fall, if at all).

Almost a year ago, the folks at IDG approached me and asked whether they could syndicate VentureBeat’s content to run alongside the predictions site. They looked up other authors, too, such as Guy Kawasaki and venture capitalist Fred Wilson. I agreed, figuring it’d be fun to try out. There’s a handful of other prediction markets and sites out there (we’ve mentioned Hubdub, and pointed to a dozen others), but the Standard focuses solely on the online economy. I haven’t been part of the planning or the organization of the site. The IDG folks just told me today that they were launching, but I tinkered with it a few months ago. See screenshots below; they’ve given me and several others a profile page. Soon my profile may be filled with a listing of the bets I’ve made (I haven’t started yet).  We’re given $100,000 Standard to start out with. Derek Butcher, the IDG exec who is overseeing the project, said he wants to make this a place where people can come to see what people are talking about in the tech world. Try it out. Feedback welcome. 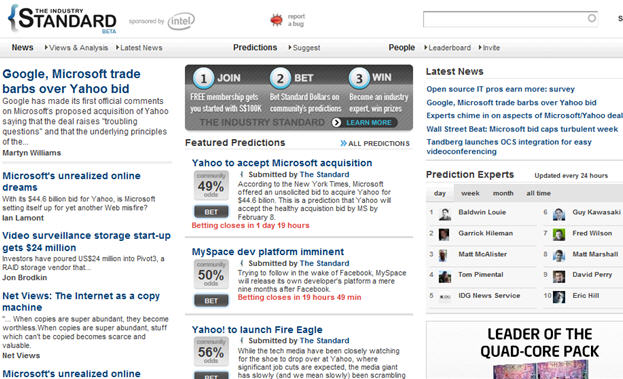 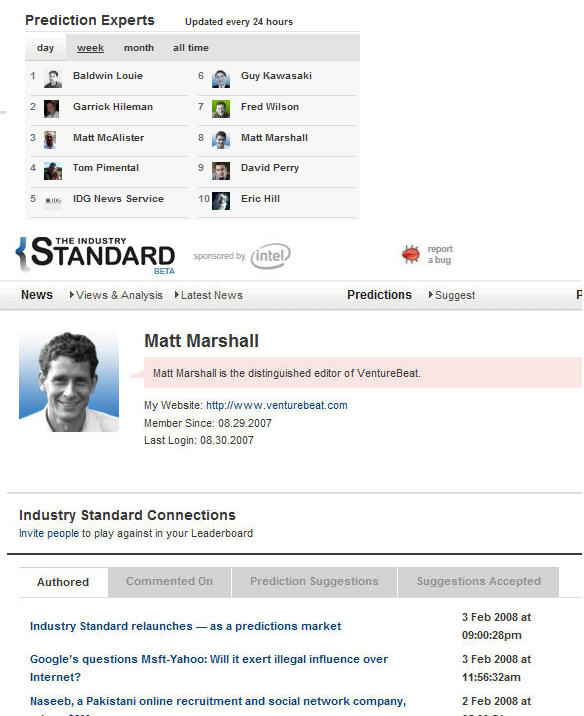