infoNgen wants to be the start-page for people in the financial world, and has just launched a free version of its news monitoring and search service.

There are plenty of start-page options out there, from Netvibes and Pageflakes to Webwag and iGoogle, but infoNgen is different because it focuses entirely on a niche: tracking more than 13,000 sources of finance-related information, and nothing else. Also, unlike a typical start-page, where you hand-select the feeds you want, and get updates only on those feeds, infoNgen pulls news from a variety of sources and categorizes it into individual boxes, so you can see the most recent “IPO news,” in one box and see “deal news” or “product news” in another.

But here’s the big question: Why do we need to use its own start-page for this information, instead of using widgets to pull its information to the start-page of our choice? This is a destination-site play in an era that is all about widget distribution and RSS feeds. What if we’re already comfy with one of the others? InfoNgen doesn’t answer that, and recognizes that the status-quo will probably be the biggest obstacle to its adoption.

It does have some decent features.

You can search for companies, and infoNgen will parse the results into the relevant boxes, so a search for “Google” for example, will deliver the most recent big headlines about Google in one box, news of deals that affect Google into another, and so on. When we tried this, not every result was about Google per se, though the information returned was relevant in a broader way – like news about Microsoft’s new product developments. However, the site is in its first iteration, and we found the interface to be cluttered and somewhat confusing. Occasionally, a link to a story was broken, as well.

The company hopes that this free offering will lure people to its more useful subscription service. For $300 per month, it will manage the customization of the information it delivers. Discovery is the key here, because you’re not only limited to the feeds you know about; infoNgen will crawl the tons of sources that you never knew existed, but might be highly relevant. You can track the overall happenings in the airline industry, for example, but if you only care about the airline industry when there are mergers going on, you can limit it to that, too. The options are enormous, and infoNgen could be a very useful way for financial professionals to get quick snapshots and constant updates about the areas that concern them.

If it can clean up its interface and make it more intuitive, it’s possible that the super-busy members of its target audience will embrace it. Portable widgets, however, would be a good next step.

The company is based in New York City, has raised two rounds of capital of undisclosed amounts. It is in the process of raising its third. Current investors include Reuters, Standard & Poor, and Union Square Ventures. 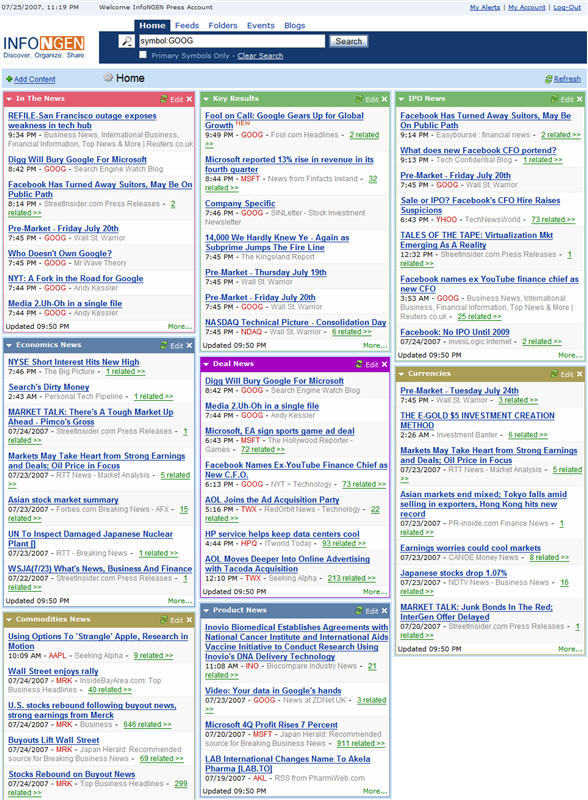