In a freshly renovated office building in central Berlin, dozens of employees gathered on a late August afternoon to celebrate the opening of Helpling’s new headquarters.

For the most part, it was a scene right of a screenplay about Silicon Valley. Long wooden tables were covered with empty beer bottles. Employees wearing T-shirts and hoodies of green and blue, the company’s official colors, milled around nibbling on food, wearing big smiles and congratulating each other.

In early January, Helpling was an idea in the head of two guys walking into a meeting at Berlin-based Rocket Internet. Now, Helpling has 200 employees and operates in 140 cities spread across eight countries. In less than nine months, Rocket built Helpling from nothing into a global e-commerce company.

In Silicon Valley, Rocket is often dismissed as a copy-cat artist, making half-baked versions of other people’s ideas. But that misses the point of what Rocket has become and what it cares about. Its real claim to innovation is its methodical approach to identifying digital business models, launching startups, and then growing them quickly. In the last few years, Rocket has created 65 businesses, fueling its own growth that resulted in its recent $1.8 billion IPO in early October.

While Silicon Valley cherishes originality and the romantic notion of the lone founder conjuring innovative ideas, Rocket is focused on speed and size in order to seize opportunities in less sexy markets. Where entrepreneurs in Silicon Valley search for ideas to dazzle their peers, Rocket pursues what it calls “butter and beer” businesses that aim to fill simple, everyday needs of consumers in places where online services are not quite as commonplace as they are in an area like San Francisco.

As the short, high-velocity history of Helpling shows, Rocket does it all with a staggering speed and efficiency that would be hard to find even in a place like Silicon Valley.

“What Rocket is doing is providing scale on tap,” said David Kohler, an e-commerce analyst for Gartner based in Paris. “They just kind of crank it out. If you look at the secret of what they do, it’s being able to provide the same organized growth over and over, but also doing it at a pace that just bulldozes everyone else.”

Founded in 2007 by the Samwer brothers (Alexander, Marc, and Oliver), Rocket is a combination venture firm and startup incubator. It focuses on creating international versions of startup successes such as Groupon, Zappos and Airbnb, a strategy that has made it controversial at times. Rocket’s mission, as stated on its homepage, is ambitious: “To become the world’s largest Internet platform outside the United States and China.”

Still, its success has made the Samwer brothers billionaires and superstars in Europe’s startup scene. And its growth has become a catalyst for the broader European tech scene, as Rocket veterans move on to start their own companies or investment firms.

Benedikt Franke was one of those Rocket alums. He originally started with Rocket in 2009, when it was still gestating and trying to figure out what it wanted to become.

Franke, in a recent interview, said he had graduated from business school and was working at Boston Consulting Group when he heard about Rocket. He wanted to learn about being an entrepreneur and figured Rocket might give him a better education.

“It was quite small and building up,” Franke recalled. “But you could already feel the energy behind it, that they were building something new and innovative in terms of the structure.”

Though he originally joined as head of business development and human resources, toward the end of the year he got involved with one of Rocket’s portfolio companies: CityDeals. The company was based on the Groupon daily deal model. Franke became chief operating officer when it launched in December 2009.

Six months later, Groupon bought CityDeals for a reported $100 million, and the company became the basis of its international operations. Franke left the company, dazed by the speed of events and ready to start his own company.

“That was a mind opener in terms of how fast you can build and scale a business,” Franke said. “That was a great ride.”

Franke’s next ride, though, wasn’t nearly so fast.

He started a company called Latin America Media Group, a content and advertising network that built 350 lifestyle and fashion portals that were primarily aimed at Brazil. With his partner, Philip Huffmann, Franke took a more standard route of pitching venture capitalists, raising several rounds of funding, and then finally selling the business in October 2013.

For Franke, the three-and-a-half years he spent on LAMG seemed like an eternity. So when he and Huffmann had another idea, to create a company that would bring local home cleaning services online, he called old friends at Rocket.

The idea for Helpling was straightforward. In many markets, people still comb through classified ads in newspapers or online, looking for some stranger to clean their home. Franke and Huffmann wanted to start a business that would help people make quick decisions by providing lists of fully vetted and qualified cleaners who were well-reviewed by other customers.

“We believe we are at the dawn of a totally new industry that allows for the digitization of these local services,” Franke said. “But it’s very difficult to find your way through all this information and make a decision. So if we can curate the information and make if very consumable, that could be a very, very big thing.”

In early January, Franke and Huffmann strolled into the Rocket offices. Since Franke’s time at Rocket, it become a frenzy of activity, having grown to 350 employees.

But it still moved as fast as ever. One week after the meeting, they had office space at Rocket and the company’s full backing.

Though Rocket doesn’t disclose specifically how much it spends on each company, this type of deal does come at a price for entrepreneurs. According to its IPO prospectus, Rocket says it typically takes an 80% to 90% stakes in its companies, with the rest being allocated to management and employees.

In exchange, though, the founders get every resource they could imagine.

Within a couple of days, Franke and Huffmann had a team of 10 programmers and product developers assigned to their project. This was not just a matter of building a clever web site or app. The group had to design a whole system by which cleaners would be recruited, tested, reviewed, and categorized. And they had to make decisions about what to charge, how to present information to consumers, and what features would be included at the start.

Meanwhile, Franke and Huffmann were meeting with Rocket’s branding team, the marketing team, and the accounting group. They had a whole analog and digital advertising campaign assembled with the help of in-house SEO and social media experts.

One thing the Helpling founders didn’t worry about was money. They didn’t have to spend time raising money or making difficult decisions about how to allocate scarce resources. Rocket was providing everything, including technical infrastructure.

“If you’re a young company, you can work with an experienced and well-functioning team of developers,” Franke said. “You don’t need to compromise on people. You don’t have to spend time going out and building a team. You have very good people right away who have already worked together.”

On March 29, just 80 days after that first meeting, Helpling launched in Germany. 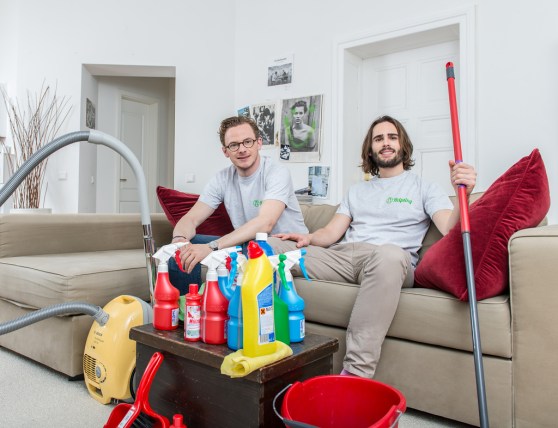 From there, the pace only seemed to quicken.

By May, Helpling was in France, Austria, Sweden, and the Netherlands. Now that the service was live, it needed to hire quickly. It needed bodies to help curate information coming in about tests given to prospective cleaners. And it needed more overall operational help because Rocket was already setting out timetables for Helpling to begin functioning more as a standalone business.

Rocket’s human resource department was still on call to help. Helpling had hired 150 full-time employees by July as Rocket drew on its networks and resources to boost recruiting, both in Germany and in its growing list of markets. As the number of bodies swelled, Rocket also began helping the company look for its own office space.

As Helpling expanded into more markets, Franke and Huffmann talked with other Rocket companies already on the ground in those regions for advice. Last week it launched in Spain. And today, Helpling officially announced that it had started service in Brazil and Italy.

“This has been passing through several phases of a company within a short amount of time,” Franke said. “We’ve been able to focus on making a great company and nothing else. And it’s still evolving at a pace that’s incredible.” 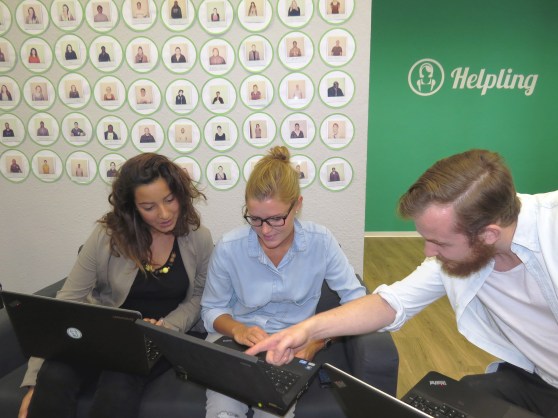 Above: Helpling employees huddle in the new offices. Behind them are Polaroid photos of cleaners who are approved for the service.

Meanwhile, Rocket is still chugging away. According to its IPO prospectus, the companies it has helped create now employ 20,000 people in 116 countries.

For all this fantastic growth, Rocket’s model still has a ways to go to prove itself. In its prospectus, Rocket says its “most mature companies, which we refer to as proven winners,” have posted total revenues of €757 million ($955.8 million). But they have also sustained a total of €442 million ($558.1 million) in losses.

The company doesn’t break these companies out by name. But it’s clear that by its own numbers, Rocket still has shown not just that it can pump out huge businesses but that they can be sustainable over the long run.

Rocket’s global PR chief, Andreas Winiarski, said the company knows it doesn’t get much respect from Silicon Valley. But he argues that Rocket may have some lessons to teach Valley entrepreneurs on how to think more globally about their ideas and companies right from the start.

“We don’t pretend that we are like Apple and Google,” he said. “We are more in the butter and beer business. But we also can take our capacity and our knowledge and go worldwide with these models.”

If it can’t win the Valley’s admiration, Rocket is hoping to at least make itself better understood and shed the reputation of being merely an outfit that clones other people’s ideas.

“We’re always seen as the empire of darkness,” Winiarski said. “And that’s wrong. We are startup guys as well. But it’s just a very professional setup and a very industrialized process.”