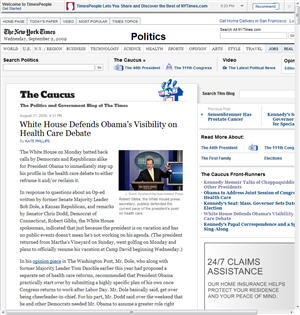 [Correction: This post originally stated that the Times’ copy desk editors don’t review and edit blog posts. They do. Their edits to my posts have been minimal, so I did not notice them.]

At Google’s 10th anniversary of Blogger event on Tuesday, I was surprised how many of the blogging experts in the room were unaware of the broad and deep adoption of blogging tools at The New York Times, one of my several freelance employers. So with the help of the Times’ Technology section editor, Damon Darlin, I whipped up an insidery look at how the NYT uses WordPress to crank out hundreds of posts per day. 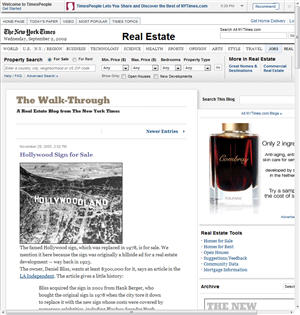 The Times began blogging in November 2005. The first post, to real estate blog The Walk-Through, carried the snoozy title “The D.C. Market Cools.” But later that day, an engaging history of the giant Hollywood sign accompanied the news that it was up for sale.

Hollywood itself got its own blog, The Carpetbagger, as the Times’ second site, followed by The Opinionator, a reblogger of opinion posts, articles and columns culled from other blogs as well as from the pages of The New Republic. At the time, these blogs were part of the TimesSelect premium subscription service. It turned out not many people wanted to pay $50 a year for yet more commentary. So Times blogs have been free since late 2007.

Today, the Times has more than 60 active blogs written by a mix of staffers and freelancers, plus event-driven blogs that come and go. I don’t think anyone planned on launching that many. WordPress simply made it easy to keep growing. The most popular NYT blogs include Arts Beat, Bits, The Caucus, City Room, DealBook, The Lede and Well. Gadgetwise, the gearheaded blog where I write about social networks, is behind these but not by much. Gadgetwise is what about how to buy and use stuff, rather than tracking the tech industry as the Bits blog does. Or in industry jargon, service journalism rather than trade news. I’ve finally found my purpose in life: Teaching America how to use Twitter.

Businesswise, the only competitor my editors talk about is The Wall Street Journal. And while they’re cool with me explaining how we process a post, I’m sworn not to blab traffic stats. That’s the only part of the job that bugs me. I’m as much of a stats hound as anyone else with a blog.

In many ways, the Times’ blogs are no different from anyone else’s. But there’s one organizational trick they employ very effectively: Division of Labor. Times bloggers don’t work on their own. They don’t handle every aspect of their blogs. Who does what is divided up to bring specific expertise to bear on different parts of each post. The result is I can crank out more posts, and those posts are better overall, than if we writers did everything ourselves. I know, not everyone wants to have other people involved in their blogging. But there’s a reason people work in teams. 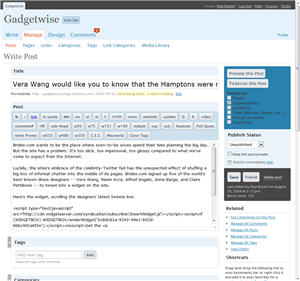 How a Times post gets published, at least for me

1. I login to the Times’ WordPress site and write my first draft. When I first began blogging for Gadgetwise, I ran my ideas past my editor before posting. Nowadays, I have a solid idea of what will or won’t fly as a Gadgetwise item. So I just fire up WordPress and type.

2. I add some tags, write a headline that will probably be replaced, and write a one-line excerpt that will run on Gadgetwise’s index page.

3. If I want screenshots of a website or an app, I either take them myself or ask the people who produce the site, app, upstart rock band or whatever I’m blogging about to send me a few good shots. The screenshot should demonstrate what’s special about the thing I’m writing up, so readers can better grasp the idea.

4. I email images to producer Danielle Belopotosky as attachments. She’s much better at making them look their best than me. Yay Division of Labor!

5. I set the post’s status to Pending Review, and also email the Times’ Personal Tech editor Sam Grobart in New York that there’s a post of mine ready for him to edit. This is their secret weapon at The New York Times: Editors.

6. Sam looks at my post in between editing David Pogue’s State of the Art column and shooting how-to videos. Sometimes he replaces my headline. Mostly he tweaks parts of sentences for clarity. We don’t do the long, back-and-forth edits we do for the newspaper features we also work on together. This lets us crank out blog posts that are less work and have a more individual voice than the business section of the newspaper, which is wonderfully grueling to write for. Maybe one time in five, Sam asks me to rewrite part of a post or address some aspect he thinks is missing.

7. Someone at the Times’ copy desk looks at the post, and edits any style or grammar errors. 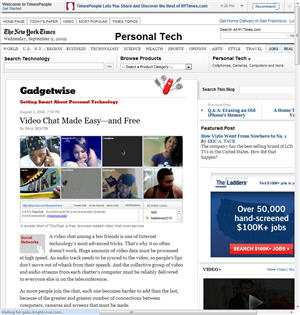 9. I tweet my posts out of sheer vanity, and because my friends kick me when I don’t. But there’s more Division of Labor here: The Times does my marketing for me. Their Twitter feed has 1.7 million followers compared to my 1,800. My posts are also listed on the Times’ Personal Tech homepage, where a lot of people check in daily. The paper has a PR team who handle any media requests. Best payoff so far: San Francisco talk radio giant KGO has tapped me to explain Twitter for them, too.

10. Sam and Damon take turns reading and approving comments. I just read them and reply to some. This is a huge reduction in time and stress for me, so I can write more posts.

Also, the job comes with an nytimes.com email address. Every few days I try to reply to everyone who writes me with at least “Thanks for writing, Bill.” This takes far less time than I thought it would. Contrary to my expectations, the people who email me are surprisingly nice.

What can you learn from The New York Times?

Smart division of labor makes writing for the Times easy and quick. My advice for other group blog sites: Hire someone to handle all images for posts, so your writers can focus on writing. Beyond that, a good editor will turn good bloggers into better bloggers by helping them improve weak passages, by teaching writers to fill their posts with context and clarity, and sometimes by shooting down a post that just isn’t working. For all this, your writers will hate them. But readers will love it.