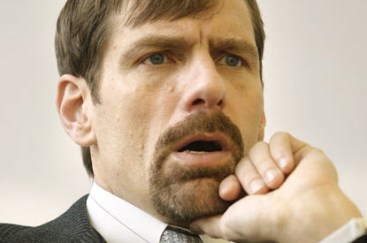 In a courtroom shocker, Broadcom founder Henry Nicholas and the company’s former chief financial officer won a legal victory as a federal judge found that prosecutors had intimidated witnesses.

U.S. District Court judge Cormac Carney dismissed stock-option backdating charges against the former chief executive Henry Nicholas and CFO William Ruehle. The case was scheduled to go to trial in February and had been in the works for years, but Carney said that the government prosecutors “threatened and intimidated three witnesses.” To submit this case to a jury would be a “mockery of justice,” the judge said.

I happened to go to the Broadcom analyst meeting today, where conversation focused on the announcement. But the company’s current management had no involvement in the case.

“The people of Broadcom long ago put behind us the events, some as old as 10 years, that led to these cases,” current chief executive Scott A. McGregor said in a statement. “Still, today’s events are important for Broadcom because they remove an issue that, for some observers, may have partially obscured Broadcom’s tremendous business successes.”

Carney scheduled a hearing for February to decide whether to proceed with a separate trial against Nicholas over narcotics-related charges. That case became famous because of leaks of the alleged excesses of Nicholas. Prosecutors claimed he regularly hired prostitutes and had parties where illegal drugs were abundant. There was a reported incident where the pilot on Nicholas’ private jet had to wear a gas mask because there was so much marijuana smoke on the plane.

Irvine, Calif.-based Broadcom restated its earnings as a result of the case, reducing earnings from 1998 to 2005 by $2.2 billion for underreported compensation expenses. It was the largest backdating restatement, according to Bloomberg.

The judge said that one prosecutor leaked information about former Broadcom Chairman Henry Samueli’s grand jury testimony to newspapers to force him to plead guilty. The prosecutor also tried to influence the testimony of a former general console after the judge had granted him immunity. The judge said the prosecutor also caused the former head of human resources at Broadcom, Nancy Tullos, to lose her job at a different company as part of an effort to get her to cooperate with the investigation. Tullos, who pleaded guilty to obstruction of justice, was a key witness for the government.

Judge Carney foreshadowed his concerns about the prosecution earlier. On Dec. 9, he set aside the guilt plea of Samueli, who was the co-founder of the company with Nicholas. It seemed like the prosecution had a huge case against Nicholas, who might have been a rarity as a billionaire in jail. The drug case is still a big threat for Nicholas, but I’m very surprised this case would be dismissed in this way.