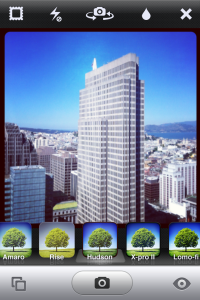 Instagram is a hugely popular photo-filter app that has more than 9 million users and 250 million shared photos. In addition to the increased image size, this 2.0 update adds four new retro-tastic filters, the ability to see how filters look in real-time, and instant tilt shift controls. The app is faster, image borders can be turned on or off, and you can quickly rotate photos after you take them.

“We’re super excited about the new filters, and think live filters change the way we’ll all look at the world,” Instagram co-founder and CEO Kevin Systrom told VentureBeat of his favorite new feature.

Instead of snapping a photo and then picking a filter, live filters let you preview the available effects, including tilt shift, while composing an image.

The feature that will be most welcomed by the Instagram faithful, however, is the increased image size. Previously, Instagram photos were saved as a paltry 612-by-612 pixel image. This update bumps the size up to 1936-by-1936 pixels on the iPhone 4, and 1536-by-1536 on the iPhone 3G.

One concern with both of these new features is that they could slow down the app. Systrom says this is not the case, and that “it’s definitely going to be faster no matter what.” Filters that used to take up to 5 seconds to render will now appear in 5 milliseconds, said Systorm.