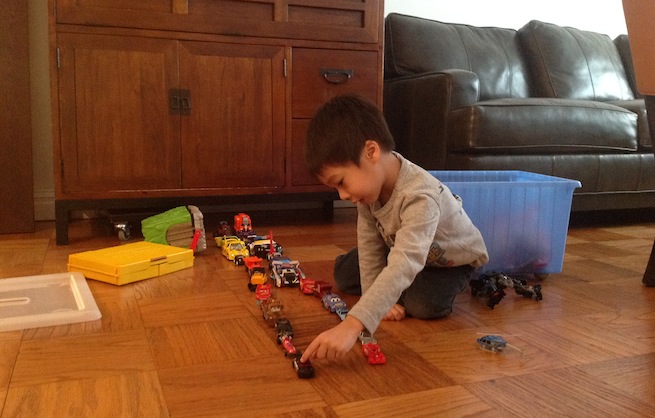 In this second part of a four-part series on how Facebook made small design decisions that had a tremendous impact, I’ll focus on visuals, which is especially relevant with the news of Facebook’s $1 billion acquisition of Instagram. (See links to the rest of the series below).

Last week, I was in New York, visiting Alex, my 4-year-old second cousin (that’s him in the photo). As he played with my iPad, I was struck by how he quickly grasped every element of it. He can’t read, but he understands what he needs to on the iPad. We also played with some of his toy cars. I asked him to pick out the tow truck, the school bus and the bulldozer. He didn’t know what a bulldozer was, but he could pick out all of the others.

It’s a fundamental truth about humans that we are visual creatures. We know how to see and identify objects well before we can read. It’s also something that too many startups ignore. But Facebook didn’t — and the visual nature of Facebook is one of the keys to its success.

Today, Facebook announced that it is doubling down on that success with the acquisition of Instagram, the rapidly growing mobile photo service. Photo sharing was a key driver of Facebook’s growth.

But photo sharing dates back a decade before Facebook, all the way back to one of the pioneers of the Web, Marc Andreessen.

Andreessen has done a lot of great things for the internet, but one of the most significant was this email he wrote while at the National Center for Supercomputing Applications at the University of Illinois in 1993:

I’d like to propose a new, optional HTML tag:

This names a bitmap or pixmap file for the browser to attempt to pull
over the network and interpret as an image, to be embedded in the text
at the point of the tag’s occurrence.

(There is no closing tag; this is just a standalone tag.)

The IMG tag is one of the reasons the World Wide Web took off. There were interconnected computer networks before the Web, but none achieved the massive success the Web did, and visuals are a key reason why.

There are many examples of how visuals drive adoption. The hugely popular Pinterest is basically a visual version of Delicious. (After a disastrous tenure at Yahoo!, delicious was spun off and is itself trying to be more visual.)

Slideshows are among the most popular features on blogs. On VentureBeat, every story has a lead image.

One of the most popular posts I’ve written about Groupon didn’t take days worth of research or analysis. I grabbed one set of numbers from Groupon’s S-1 and created a chart in Excel that showed that despite its claims, Groupon is not a technology company: I think that chart took me all of 15 minutes from start to finish, a fraction of the time I spend on a typical post, but it’s the main reason that post proved so popular.Mint.com is another great example. The highly visual personal finance site took off and was sold to Intuit for $170 million. But the core technology powering Mint was licensed from Yodlee, which has been around for more than 11 years. I was an early user of the text-heavy Yodlee, but it wasn’t until the more visual Mint came along that many people began using it.

If visuals are so compelling, why do so many startups ignore them?

Many engineers are text-centric in their orientation. Coding, after all, is done primarily in text. A lot of engineers I meet view images and graphics as inefficient and prefer text-based tools.

But another reason is that computers really suck at working with images. Machine vision — teaching computers how to see and recognize images — is one of the great challenges in computer science. My cousin Alex is just 4, and he can already beat Google’s algorithms for identifying common objects like school buses, tow trucks and police cars. Now that I taught him what a bulldozer looks like, he can also identify that.

To be fair to Google, Google Goggles would beat Alex in identifying fine art that is stored in Google’s databases. But I did quickly teach my 8-year-old second cousin Sasha how to identify Roy Lichtenstein paintings after we watched Night at the Museum: Battle of the Smithsonian.

Silicon Valley is finally coming around to the importance of visuals in product design. There is significant demand for top-notch visual designers.

Design is significant from the very first users. The first hundred, thousand and ten thousand users who will drive growth will all be impacted by visual design. At that stage, technical scalability isn’t a huge concern.The acquisition of Instagram, which went from zero to a $1 billion valuation in less than two years, should further sharpen the focus on visuals.

Be sure to check out the rest of this series on what’s made Facebook successful: