Intel has confirmed that it’s buying Israeli urban mobility startup Moovit, in a deal worth $900 million. Reports of the impending acquisition were first published by local Israeli publication Calcalist on Sunday, and in a press release today, Intel noted that it was buying Ness Ziona-based Moovit to help make Mobileye a “complete mobility provider,” which will eventually include driverless taxi services.

Chip giant Intel has a recent track record of acquiring Israeli startups. Just a few months back it paid around $2 billion for Habana Labs, which develops programmable AI and machine learning accelerators for datacenters. But back in 2017, Intel doled out an eye-popping $15.3 billion for Mobileye, a computer vision firm specializing in autonomous cars. Mobileye’s advanced driver-assistance systems (ADAS) are currently used in 60 million vehicles, and as the technology moves further toward full autonomy, Moovit’s arsenal of data will help Mobileye turn on “cost- and demand-optimized driverless” car services.

When the deal closes, Moovit will become part of the Mobileye business but will continue to operate under its own brand and run its existing partnerships. It’s also worth noting that Intel had previously invested in Moovit via its venture capital arm Intel Capital, meaning that the value of the acquisition is actually pegged at $840 million, net of Intel Capital equity gain.

Founded in 2012, Moovit is best known for its consumer-facing app that’s used by more than 40 million active users globally to see the best ways to traverse a city using a combination of transport options, and even includes nifty augmented reality (AR) directions. However, the company has pivoted its core business to focus on licensing its back-end platform to third parties through a “mobility-as-a-service” (MaaS) offering. Through this, Moovit provides municipalities with data and analytics to improve city transport infrastructure, while corporations such as TomTom and Microsoft also leverage Moovit’s data to offer third-party developer access to real-time transport data to include in their own apps.

The value here for a company like Intel and its Mobileye subsidiary is data, which Moovit aggregates from myriad transit partners and corporations, as well as from its 40 million active users who generate more than 6 billion data points each day around traffic flow and user demand. Mobileye has made no secret of its plans for so-called “robotaxis,” and Moovit’s data will prove vital as it pushes into the driverless MaaS sphere.

Indeed, Intel and Mobileye intend to sell and lease self-driving vehicles for other companies and organizations to operate, while they also plan to deploy their own robotaxi services. But having the technology to operate fleets of driverless vehicles at scale is only part of the picture, and data and “customer-facing infrastructure” will also be required, according to Mobileye CEO Amnon Shashua.

In other words, Moovit gives Mobileye the knowledge it needs as it gears up to commercialize autonomous vehicle services in key markets around the world. Through the Moovit mobile app, Mobileye can push its robotaxi services as part of the broader trip planner offering, meaning that a commuter may see that the best way to get to their office is to take a driverless taxi from their home to the station two miles away, and then get a train the rest of the way.

The timing of Intel’s acquisition is notable, as it comes during a period of great uncertainty for companies such as Moovit — the global COVID-19 crisis has meant that public transport has been in low demand as people have stayed at home. Moovit itself publishes data regarding the impact of COVID-19 on public transit usage in key cities around the world, showing that it’s down by as much as 80% in some areas. 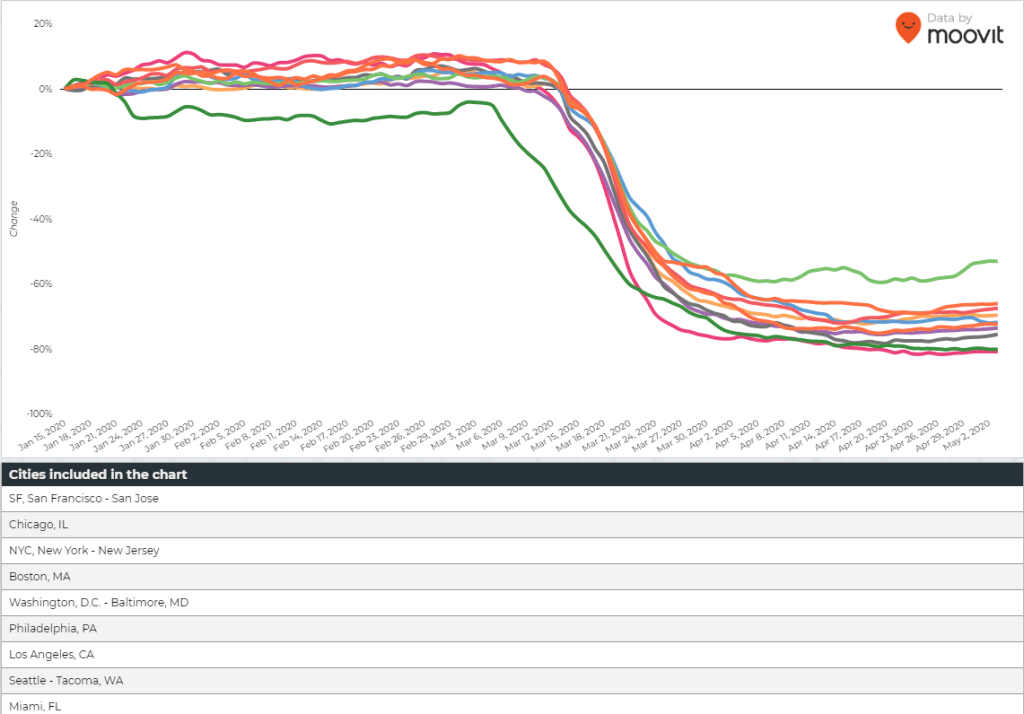 Above: Moovit data showing decline in public transit during COVID-19

As with other companies during the COVID-19 crisis, Moovit has sought new ways to keep business going. Last month it launched an emergency mobilization platform that makes it easier for transit organizations to redeploy their unused vehicle fleets to create new on-demand transport services for frontline workers. Corporations can also use the platform to arrange dedicated pickup services to get their essential employees safely to their place of work.

It’s not clear what role — if any — the COVID-19 crisis played in Moovit’s decision to sell now, but under the wings of a tech behemoth such as Intel, Moovit can worry just that little bit less about revenues in the coming months and years as society adjusts to what could become a “new normal” that leans heavily on remote working. The terms of the deal also seem like a decent exit for Moovit, which had raised around $131 million since its inception, including the $50 million series D cash injection led by Intel Capital in 2018.