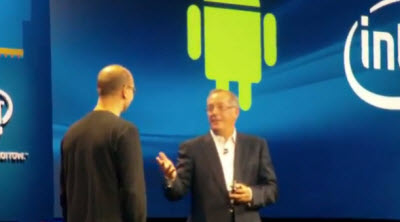 Not long ago Intel would have welcomed Microsoft on stage to talk about the Wintel alliance related to PC hardware and software. But today, Intel and Google joined each other on stage at the Intel Developer Forum to talk about an alliance, even as Microsoft was staging its own separate conference.

Circumstances have thrown Intel and Google companies together. Intel wants Google to beat Apple, presumably, because Apple uses its own chips in tablets and smartphones. Google now needs fast chips because it has purchased Motorola’s phone business. And Intel’s major partner, Nokia, has shifted away from the Intel-co-developed MeeGo operating system to Microsoft’s Windows Phone 7. These shifting alliances mean that Intel and Google’s interests are perfectly aligned. And it’s noteworthy that Intel CEO Paul Otellini is on Google’s board.

At the close of his keynote speech, Otellini welcomed Andy Rubin, head of the Android business at Google, onto the stage at IDF. They said they were renewing their alliance and that Intel’s code-named Medfield chips would be used in upcoming Android smartphones debuting in the first half of 2012.

“Every time we have collaborated with Google, good things have come out of it,” Otellini said.

Intel’s Medfield chips may be the first to be used in Android devices, but the company may not have a significant silicon advantage until 2013, said David Wu, analyst at Indaba Global research.

“I’m eager to see the innovation that developers create as well,” Rubin said.

Check out our shaky cam video of the Intel-Google alliance.