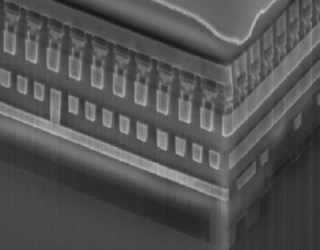 Intel and startup Numonyx said today they have accomplished a breakthrough in a new kind of memory chip that combines the best features of a variety of memory types. Numonyx (founded in 2000) has been working on something called “phase change memory” for years, with Intel as an investor, and the companies view it as a candidate for the ideal memory chip. But it seemed to be lost in an endless research cycle. Until now.

Today, Intel and Numonyx are demonstrating a prototype of a 64-megabit phase change chip that can be stacked three dimensionally on the same chip. That means the chip has multiple layers of memory cells, allowing it to be densely packed with storage cells. It can also be used for both random access (DRAM) functions and non-volatile memory (like Flash, where the memory is retained even without power). And it doesn’t consume a lot of power. The initial chip has just one layer, but future chips are expected to be stackable.

This new prototype chip, called a PCMS for phase change memory and switch, has a storage cell layered with what Numonyx calls an Ovonic Threshold Switch, which allows the cells to be stacked vertically yet accessed easily. The prototype uses a material that is an electrically-charged form of glass. This same kind of material is used in CD-ROM drives and non-volatile memory today

Intel is doing the research to advance personal computing and is encouraged by the milestone, said Al Fazio, an Intel Fellow and director of memory technology development at the world’s biggest chip maker. But in a conference call, he said the companies are not ready to predict when they can manufacture commercial chips. He said he does expect that, because the memory can be stacked, the chips will be able to store more memory in a given space than flash memory chips — the memory of choice in storing data in cell phones — which can’t be stacked that high.

Greg Atwood, senior technology fellow at Numonyx, also said the results are promising, since it shows the ideal memory is possible. If the chips are commercialized, they could be used in everything from mobile phones to data centers, Atwood said. Atwood said that research on memory technologies usually takes about 10 years and that he isn’t surprised it has taken this long, given the need to test so many materials in manufacturing.

Memory cells are built by stacking a storage element (which stores a data bit) and a selector (which connects it to a larger array of memory cells). In this case, both use the same type of material.

There are other kinds of new memory technologies under research. One of them, magnetic random access memory, is in production now, but it isn’t a stackable memory. In principle, Atwood said that there can be four or more layers of stacked memory with PCMS. The exact number of layers is yet to be determined.

The companies will describe the chip more at the 2009 International Electron Devices Meeting in Baltimore, Md., on Dec. 9.