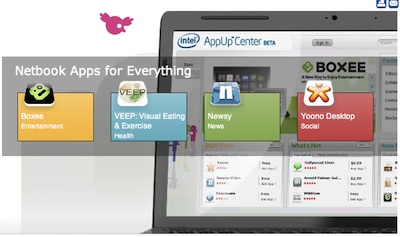 It seems like the app store model popularized by Apple’s iPhone is on its way from smartphones to other devices. Today at the Consumer Electronics Show in Las Vegas, chip-maker Intel announced that a beta test version of the AppUpCenter, its app store for netbooks, is now available.

Owners of Windows-based netbooks can now go to the AppUp site and download the store, then install apps like Boxee, for playing web video and music, or Yoono, for managing your social networks and instant messaging services. Developers have downloaded the software development kit for creating AppUp apps 2,500 times, Intel said.

It sounds like AppUp’s real potential, however, is really as a “white label” store that different netbook makers can customize and offer to their own customers. So if you own a Dell netbook, you’d launch a Dell store, but the underlying infrastructure would come from Intel, and developers could build an app that’s available across all these manufacturers and devices.

In addition to Dell, Intel announced deals with Acer, Asus, and Samsung. Each of those companies should be rolling out their own app stores in the next three months — in fact, it sounds like AppUp provided at least some of the underlying technology for Samsung Apps, the cross-device app store that Samsung announced yesterday. (It’s interesting to contrast the app store model with what Google says it wants to do with its netbook operating system, Chrome OS, which is all about accessing the web instead of downloading apps.)

“We’d like extend it to any Intel architecture device in the computing spectrum,” he said. That includes PCs, handhelds, and smart TV devices.