This card is really tuned to both the core of the network and the edge or the base pan. If you think about a traditional network from a wireless standpoint, you have a radio head and then you have a baseband processor unit. That baseband unit is now getting virtualized, going to more of a software-based solution on the Xeon processors. This card gets plugged right in there and accelerates that whole chain.

We’re very excited about what we bring as a total company to this transformation. One of the frustrations I’ve had over the last couple of years is I think people miss this about us. This is probably as big as anything we’re doing in the company. It’s just starting. We’re in the early innings of 5G. You’ll hear a lot about it next week at Mobile World Congress. We’re really just getting started. This is high-performance computing embedded in the network. It’s the cloudification of the network. 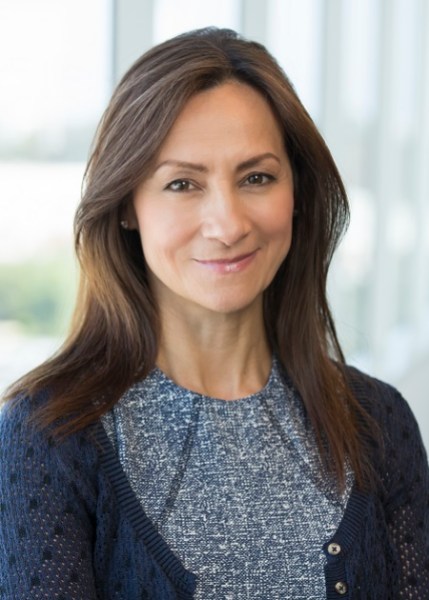 Above: Sandra Rivera is senior vice president of network platforms at Intel.

Question: Talking to your investors, talking to the analysts who look at what Intel is doing, bringing more computing into the network and into the mobile world makes perfect sense. They understand that. If you can get more Xeon into areas where it’s never been before, that can’t be a bad thing. Your competitors are saying the same thing, that edge computing is big. What they struggle with is, why do we need a modem? Why do we need to be in the client device business? That’s a tough business. You have to be all the way in or not. Is there an argument on that side?

Swan: I’ve heard that question before. [laughs] The way we think about the mobile internet itself, in the 5G world it becomes much more relevant in our minds. The investments over the last couple of years were to, first, get a technology that’s in the game. Second, to get a customer that appreciates the technology and makes us better by our interactions. But third, most important, is the relative value of the modem — not just in the device, but in this new 5G world we talk about. We think it becomes more important.

Again, it’s not just in the phone. It’s increasing these applications at the edge, whether it’s a modem in an automobile, a modem required to connect more and more devices at the edge. We think the relative importance of the modem going forward is larger, not smaller. We’ve been investing as much for positioning for 5G as the path to get there along the way. We announced, in the fall, that we’d be launching our 5G modem in the second half of this year. The primary use case in the early stages is in these devices we carry around, but our belief is that its application will be much broader through higher attach rates in a PC becoming more relevant, and in other devices at the edge. It becomes relatively more important going forward, not less important. It’s not just about building the IP to be in a phone, but building the IP to be — the other things we’re talking about, just a much broader set of applications.

We see this proliferation of a large class of connected devices, whether it’s cars or drones or robots or cameras or meters in the city, as driving more data, and more need for an intelligent, flexible, programmable network. It really does become somewhat of a virtuous cycle. We’re driving more data. We’re interacting with those connected devices in the access, in the edge, in the core, and in the cloud.

Swan: Where investors have most anxiety is, we were catching up for a while. Catching up, in their minds, means not making any money. But now we’re at a stage where we have products that we believe are as good as anybody in the industry, as we migrate to 5G. But that’s more — we were behind and we’re caught up. Now the question is, do we have broader applications? It’s not just selling a device to primarily one customer. It’s selling the IP in a variety of different applications where you can make money.

In those three stages of evolution, stage one was very frustrating for the investor base. Stage two is a little more wait and see. For us, stage three is the, in our vernacular, the 8160 modem 5G enabled in more applications for more and more customers. 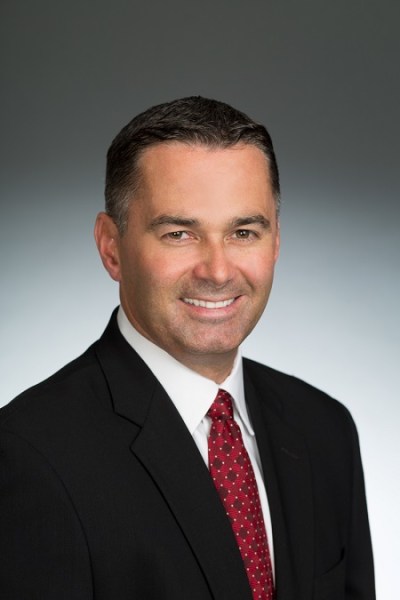 Above: Dan McNamara is senior vice president of programmable solutions group at Intel.

McNamara: Sandra and I were at a meeting just last week. It’s taking that IP and integrating it with a multi-core SOC that we’re looking at. It’s branching the IP into a different class of product, which would obviously not go into this, but into a small cell in town or something like that. We’re definitely looking at that.

Question: I heard a version of the earlier question, where we’re still at stage one or two because there isn’t a mobile SOC attached to that discrete modem, so that limits opportunities in edge, be they handsets or other connected devices. Is there some way to fill that gap at some point?

Swan: Through the mind of investors?

Question: Well, no. In the product line, is there —

Swan: I’m going to do investors and then have Sandra do product line. Again, I do this because it is a frequent question. I think investors have gone from the infuriated stage to, “Okay, I think I understand, but I’m a little bit uncomfortable until I see.” And now we’re trying to get them into the proof points of broader-based applications. They’ve come around partially, but they’re still in a wait-and-see mode, to see the product road map and the adoption and application at the end.

Rivera: Clearly, the network opportunity benefits from the more and more connected devices that are out there. The focus beyond the phones for us has been in these CPE devices, this fixed wireless access opportunity that’s enabled by 5G in gateway platforms, which we are announcing next week with a number of different partners, a number of other CPE device manufacturers bringing gateway devices to the market.

We also have done, over the past two years, over 125 trials in 20 different countries where having the modem IP allowed us to learn about the use cases and the usage models and what was needed in terms of the access and the edge and the core of the network. We enhanced our product portfolio on the network infrastructure side, as it also informed a lot of the capabilities we were putting into our multi-mode 5G modem, which is unique. It’s 5G, 4G, 3G, 2G. It’s 5G in standalone and non-standalone modes. It has carrier augmentation within it. It has sub-6GHz. It has millimeter-wave. It’s a very robust multi-mode modem.

We’re excited to be able to see the entire application, the entire service creation capability, from the modem through access, edge, core, and cloud. We think we’re in a unique position, to be able to see all that and drive forward a lot of the use case innovation happening with 5G, because we’ve been a part of it end-to-end, from the beginning.

Question: Just to clarify, you have a processor business in the company in various forms, and a modem business. Right now they’re separate? That’s the part I’m not clear about. Every single vendor of modems at some point has integrated an SOC. It’s not a discrete part. It seems like for edge computing, from handsets to other powered devices, it has to be an integrated product in some way. Is there are a road map on which that happens for Intel?

Rivera: Today it’s a discrete modem opportunity. The opportunity to, again, be in all of those different types of endpoint devices — we’ll see where the market will go in terms of what’s required, in terms of further integration. But we are enabling, through a lot of our partnerships and other announcements we have next week — with Fibocom, we have an M.2 modem module to go into all of these different classes of devices as well. We see our opportunity growing, but we’re looking to the market to be the arbiter of where the unique value and differentiation is for us with the integrators. For the moment it’s a discrete modem. 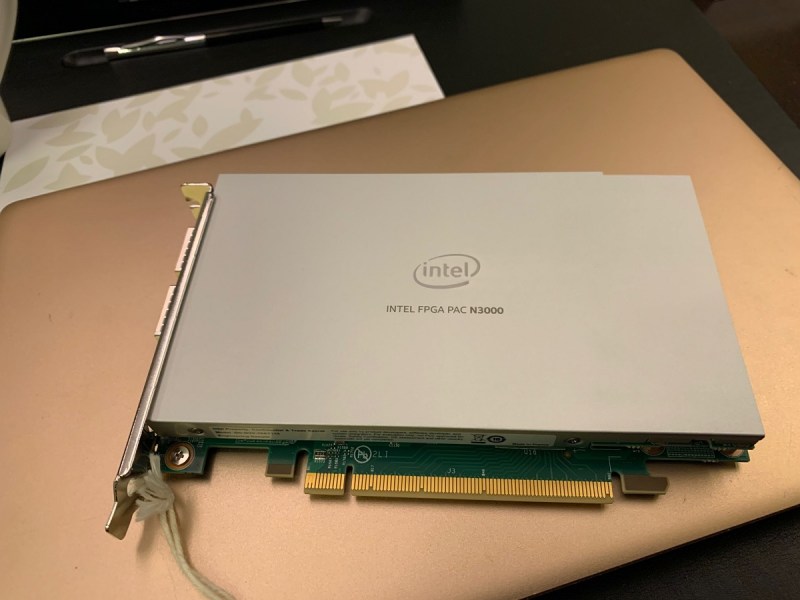 Question: How are you set for timing and speed relative to Qualcomm? They’re saying they’ll be on a second or third generation by the time Intel has its first.

Rivera: The fact is that most of the volume curve will come in 2020, and we’ll be in the market in 2020. We’ll launch to customers at the end of this year, and then the volume ramp really begins in 2020. What’s happening between now and then is the network is getting conditioned and ready for all of those devices. That’s a very different time scale than [for] devices.

The network transformation, this convergence of computing with the connectivity element of it, the platforms that we’re creating for multiple applications — hosting and AI and data analytics capabilities — this cloudification of the network that Dan talked about, that’s a huge opportunity. In 2022, that’s $24 billion of network logic silicon. There is no huge MSS player. It’s highly fragmented. But the market is coming to the areas where we have both technology and market leadership. It’s high-performance servers. It’s virtualization. It’s cloud compute.

Question: It seems like, though, some of the customers want to get the marketing advantage of being able to announce first. Samsung this week says, “Hey, we have a 5G phone.” They seem to be very impatient to get stuff announced.

Rivera: That’s great. Clearly the evolution of — part of 5G is a faster phone. But if you look at previous generations of wireless technology, 4G was all about faster data on your phones. Whereas 5G will be smarter data in your network. We’re missing the real disruptive innovations happening on the network infrastructure side and the huge market opportunity — really looking at how disruptive cloud computing was and how that’s happening in terms of network computing, as well.

We love all of the devices, because again, that drives more network opportunity. But we believe that we’ll be there when the market really needs it.

McNamara: As we mentioned, it’s early innings. If you look at it today, a lot of people are already talking about growth due to 5G, and it really is early. We believe that from modems to SOC technology to custom ASIC technology and the server business, we’re extremely well-positioned going forward.