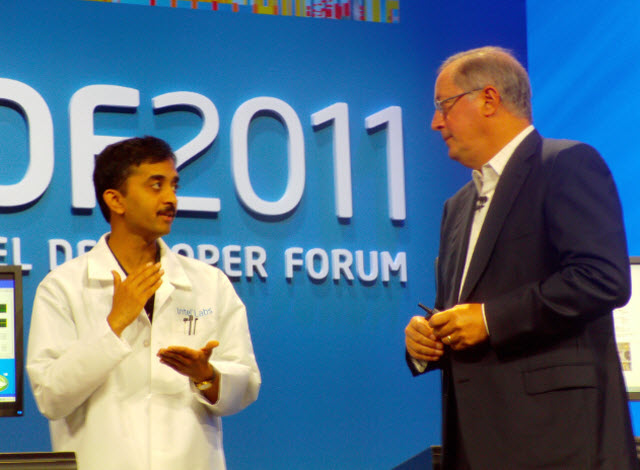 At Intel, the idea of the Ultrabook and mobile computing is becoming the drumbeat. Intel chief executive Paul Otellini hammered that home as he spoke today about upcoming products from the world’s biggest chip maker that will enable super-thin laptop computers as well as tablets.

Speaking at the Intel Developer Forum in San Francisco, Otellini said that Intel has a trio of chips coming this fall through 2013 that will cut the power consumption and increase the computing power of Ultrabooks, which are MacBook Air-like laptop computers with super-thin profiles and all-day battery life.

These devices are just one of many and will be driven by the unending growth of the internet. Otellini noted that 48 hours of video are uploaded to YouTube every minute. Users are tweeting 200 million times per day, and they’re uploading 7.5 billion photos a month to Facebook. The world now has 4 billion connected devices, and that is driving $455 billion in spending on data technology every year.

The devices will be part of a computer continuum, or a number of devices that users will embrace, but won’t use exclusively, to get to their personal data on the internet. Intel has been touting the idea of the Ultrabook since this summer, and now the first products based on the idea are coming out.

Next year, Intel’s code-named Ivy Bridge microprocessor will make Ultrabooks even more power efficient, and the code-named Haswell chip will take that even further when it debuts in 2013. These products are part of Intel’s plan to make sure the PC remains relevant in an age of smartphones and tablets, but future Intel chips will likely target those segments as well.

“Any device that extends the use across the continuum of computing is important here,” Otellini said. “The idea is to have them seamlessly interact together. There is no single device at the center. The user is at the sweet spot wherever he or she goes.”

Otellini also showed off an entirely experimental solar-powered computer, running on solar cells. Many of the demos were based on devices running the Google’s Android operating system.