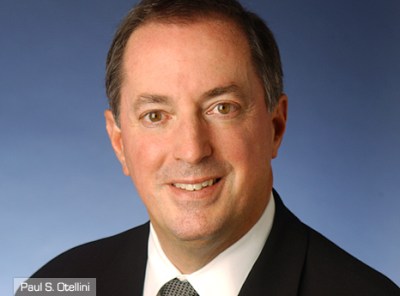 Kicking off the tech earnings season as an optimist, Intel chief executive Paul Otellini said consumer demand for computers is much stronger than enterprise demand and that the overall picture isn’t as bleak as some feared.

Otellini’s comments in today’s earnings conference call are worth delving into deeper because they offer clues to the shape of the economic downturn and its effect on consumer buying patterns. Everyone still wants to know just how bad things will get and when they are going to get better. A bunch of CEOs in Silicon Valley recently expressed pessimism in a poll.

Otellini said in the call today that it remains difficult to predict demand. But based on a 19 percent drop in inventory between the fourth quarter and the first quarter, it looks like sales have bottomed out and are heading back up. Orders for new chips are growing. Desktop chip sales hit a bottom in February and are climbing back up.

Most of Intel’s microprocessor sales are now for laptop chips. Those chips are sold to computer makers and take a longer time to get to store shelves and into consumers’ hands. Because of that, it’s taken longer for the laptop market to hit its bottom and run through existing inventories. Current inventory is normal.

Sales of netbooks, or machines that are smaller and less functional than full laptops, are continuing to grow. Enterprise server chip sales are in decent shape, but sales of enterprise computers for business users are still weak. Europe, Japan, and emerging markets — all hit later by the economic storm — are still weak, while the U.S. and Chinese PC markets are coming back.

“Our customers and the Taiwanese motherboard makers are starting to buy again,” Otellini said.

The stock market has been coming back in the past couple of weeks. But it’s too early to celebrate. Intel may be one of the winners. But the next two weeks of earnings reports will likely show a lot of weakness among the losers of the tech industry.

Another interesting development is that Intel expects to start shipping 32-nanometer microprocessors in the fourth quarter. That’s sooner than expected, and it could raise the competitive stakes with its rivals. Currently, Intel makes chips with a 45nm manufacturing process, meaning the width between circuits is just 45 nanometers ( a nanometer is a billionth of a meter). By shifting to the smaller 32nm process, Intel can jam more circuitry on the same size chip or cut the power consumption and cost of a chip.

With the shift to 32nm this year, Otellini said it will be possible to integrate both the chip set and the graphics chip onto a single piece of silicon with the microprocessor. That will spell trouble for graphics chip makers such as Nvidia, which doesn’t have all the pieces to integrate into a single chip. Intel is able to shift to 32nm earlier because it stepped up its capital investments. It said earlier this year it will spend $7 billion on new chip factories over the next couple of years.

Stacy Smith, chief financial officer, said the company was relatively comfortable that the revenues of the second quarter would mirror the first quarter’s as the industry returned to its normal seasonal pattern of spending. Smith said that gross margins, at 45 percent in the first quarter compared to 53 percent in the December quarter, would likely come back through the year as factory usage returns to normal.

While Otellini seemed confident about hitting the bottom, he still didn’t venture to make a formal prediction about Intel’s revenues and earnings. He said that Intel would proceed as usual regarding potential acquisitions. The company hasn’t been that active and usually only buys companies to fill out its product line.

Do you agree with Otellini’s optimism? Please take our poll: