Intel disclosed more details of how it will combine its new 8th-generation Core H mobile processors with a semi-custom Radeon Graphics chip from rival Advanced Micro Devices in a way that enables computer makers to create smaller and faster laptops.

Dell and HP are the first computer makers to use the new solution, which combines a number of innovations to create smaller, more power-efficient, and more powerful laptops. Both computer makers are showing off new laptops at CES 2018, the big tech trade show in Las Vegas this week.

John Webb, the director of client graphics marketing at Intel, said in a press briefing that the new Core H processors work with High Bandwidth Memory 2 (HBM2), a more power-efficient stacked memory technology that AMD pioneered and has since been turned into an industry standard. Webb said the company is targeting the latest chips and the overall solution at gamers, content creators, and virtual reality fans. 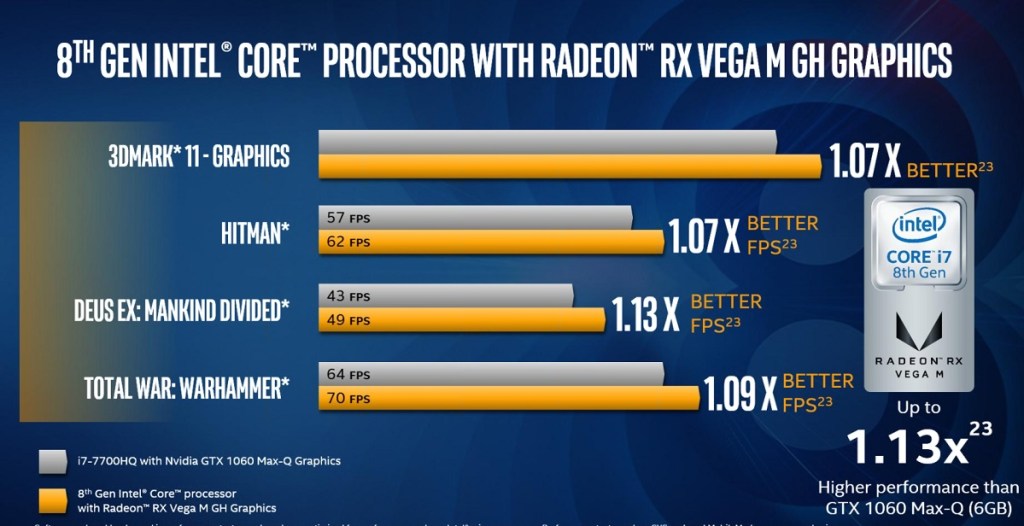 Above: Intel and AMD can churn out better performance with their combo solution.

Normally, Intel has its own admittedly under-powered integrated graphics chips in the thin-and-light laptops. Adding a discrete graphics chip from rivals AMD or Nvidia make the graphics much more powerful for gaming purposes, but it also adds a lot of space and cost. Since Nvidia seems more like a bigger threat, Intel teamed up with its longtime enemy AMD to make a semi-custom graphics chip that could fit in a smaller, single package with an Intel processor. It’s almost like adding a co-processor into a space where there was just a processor before.

It also uses a new packaging technology dubbed Embedded Multi-Die Interconnect Bridge (EMIB), which creates an eight-lane data highway between the Core H processor and the AMD Radeon graphics chip. Both chips are connected together by the EMIB within a single electronic package. With eight lanes of PCI Express Gen 3 interconnection between the central processing unit (CPU) and graphics processing unit (GPU), the HBM2 uses up to 80 percent less power than standard GDDR5 memory chips. It also reduces the silicon footprint by 50 percent.

Frank Azor, the vice president and general manager at Dell, told VentureBeat that the solution saved several square inches of space in Dell’s latest laptop being unveiled at CES 2018.

Above: Intel’s new solution with AMD is much better than a three-year-old laptop.

“We’ve jumped all in with them on it. We built an entire platform wrapped around the architecture,” Azor said. “It’s amazing, in my opinion, the milestone of our industry that would bring us to this. Two enemies working together to build this. It shows a customer-first mentality. I wish we could apply that in other industries. Two companies coming together to build a solution that’ll provide a better computing experience. It’s phenomenal.

Azor added, “We’re getting a thinner form factor, smaller overall form factor, lighter weight. Because of those benefits, we can put in more battery life, more features in the product, more performance. That’s a win for everybody involved.”

Now a laptop can be only 1.7 millimeters thick and still have powerful discrete graphics capability, with outputs going to as many as nine displays at 4K resolution. Intel is providing its Core H i5 and i7 processors while AMD is supplying its Radeon RX Vega M as part of the solution. Laptops made with the tech will also have a long battery life. 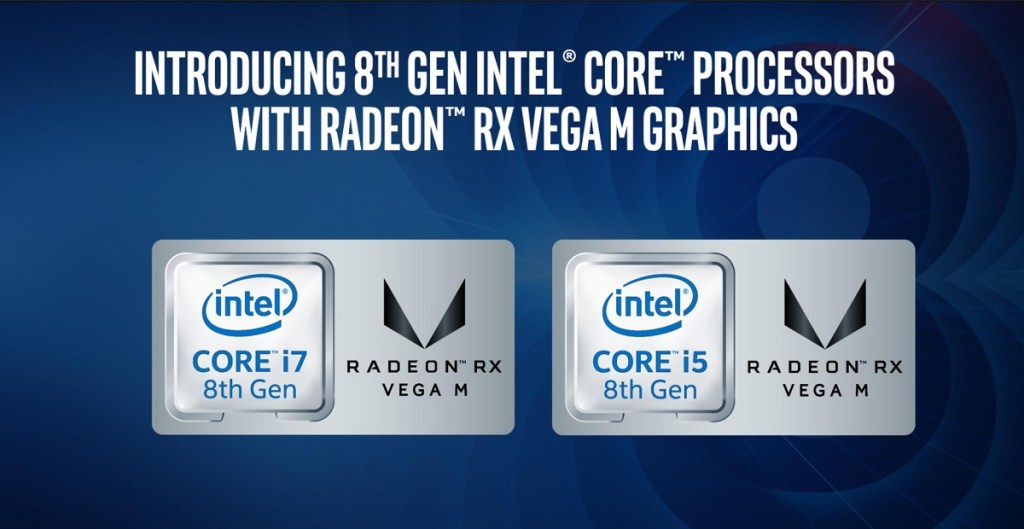 Intel said the new laptops weigh 4.6 pounds and have a battery life of 9.3 hours, compared to three-year-old laptops that weighed 6 pounds and had battery life of 4.7 hours and were much thicker. Dell and HP are introducing their laptops later this week. Compared to current-generation laptops, the new laptops will have about 10 percent to 30 percent better CPU performance, quieter performance, smaller size, and multiple times better graphics performance. 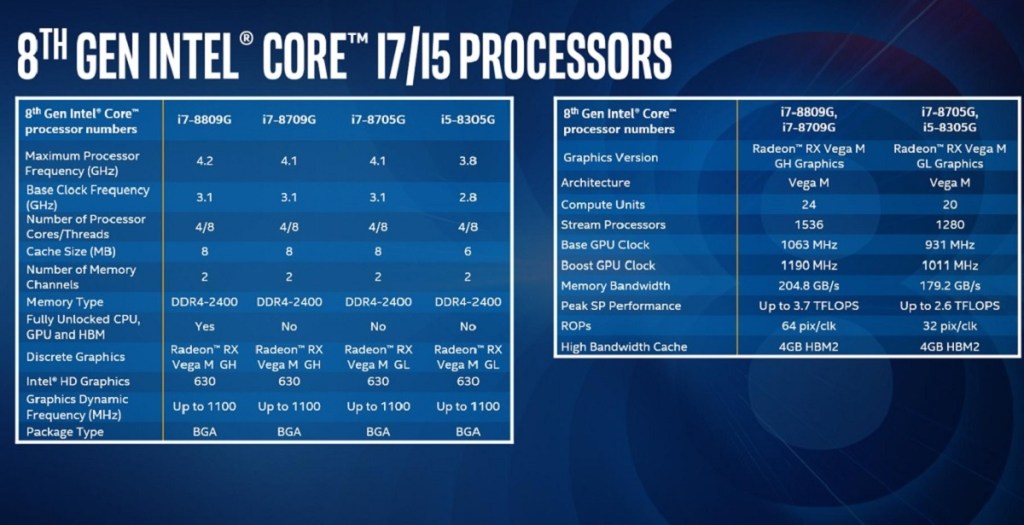 Above: The specs on Intel’s latest 8th Gen Core processors.

Webb said that other companies such as Artesyn are working on delivering a better cloud-gaming experience with the new Intel-AMD technology.