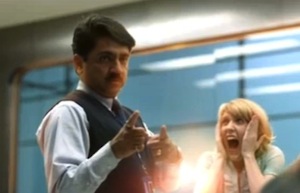 Chip maker Intel again beat Wall Street expectations, reporting what the company says is its best first quarter ever. Intel’s fortunes are seen as a predictor for the tech industry, since the increased demand for its chips suggests increased demand for PCs, or at least growing optimism from PC makers.

Intel’s revenue rose to $10.3 billion, up 44 percent from the same period in 2009. Its profit was $2.4 billion, up 288 percent. That’s 43 cents per share, compared to the 38 cents per share that analysts predicted. The company closed the quarter with 79,900 employees, down from last year but up slightly from the previous quarter.

This follows two previous successful quarters for the company.

In other Intel news, a company executive reportedly announced that Intel will be bringing Google’s Android operating system to smartphones using its Atom microprocessors.