Intel showed off a vision of the near future tonight, and it included a whole lot of 3D technology.

And a flying whale.

First, there was a convertible laptop-tablet with a built-in 3D scanner on the back. The scanner is a multi-sensor array of cameras called the Intel RealSense 3D Camera, and it will be coming to computers by the end of this year, Intel chief executive Brian Krzanich promised.

Why would you want a 3D camera on your tablet? Well, a lot of reasons. An Intel employee demonstrated one use: scanning 3D objects into virtual ones. The employee held the laptop and waved it at a small doll while the doll rotated on a platform. In less than a minute, he had created a complete 3D model of the doll on the computer.

He then set the computer down, donned a pair of 3D glasses that worked with the screen, and manipulated the model onscreen, using hand gestures in the space in front of the screen. He was able to pick up a virtual Intel logo and stick it onto the model, then add a loop at the top to make the model into a keyring.

Then, he sent the 3D model to a nearby printer from 3D Systems, which started printing out a plastic version of the model he’d scanned a few minutes before. (3D printing is still very slow, so it took almost an hour — until the end of Krzanich’s keynote — to render the whole object, even though it was very small.) 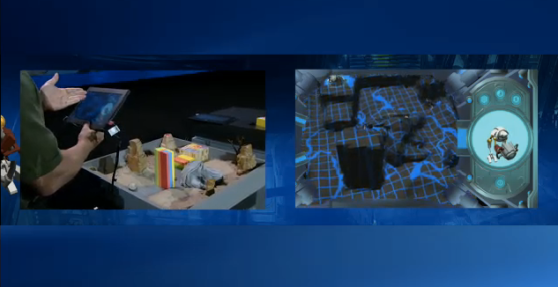 Above: A demonstration game: an Intel employee points a tablet at a sandbox (left) and the tablet renders the sandbox in 3D (right).

Intel wasn’t done there. Another use case for a rear-mounted 3D camera: interactive, augmented reality games. Krzanich brought out an employee to demonstrate a game where a virtual robot hops around a real sandbox. The employee pointed the tablet at the sandbox to scan it, giving the game data about where the robot could fly, where it could land, and where it could hide from view depending on what angle you’re looking at it from. When Krzanich placed a few blocks and a piece of clothing in the sandbox, it took just a few seconds for the tablet to re-scan the landscape and give the virtual robot all the data it needed to zoom around the new configuration.

And then, Intel showed how a 3D camera could be used to augment reality in even more impressive ways. In a demonstration that was equal parts absurdity and amazement, Krzanich pointed a tablet at the audience, superimposing a flying whale from the book Leviathan over the auditorium.

Intel’s website has a little information on its RealSense scanning and gesture control technologies, and the company says that a number of laptops and tablets will incorporate the technology in 2014, but so far the company is a little vague on the specifics. If it’s hoping to ship the technology by the end of the year, however, we can expect to see RealSense SDKs and reference designs very soon now. 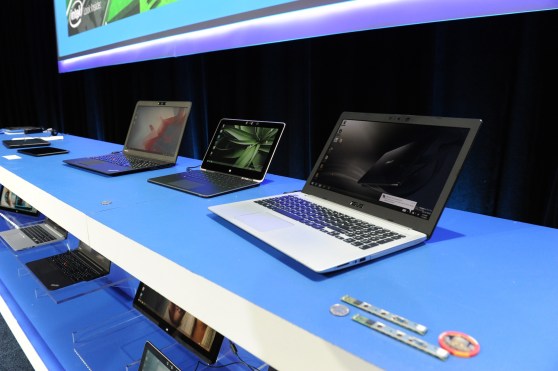 Above: A handful of devices with the Intel RealSense 3D camera; camera in the foreground.