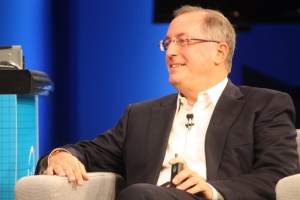 In a time of other rather dense Intel announcements, the company has now announced that its financing arm Intel Capital invested $30 million in four new tech companies as part of its $200 million Invest in America Technology fund launched in February.

The investments range from cleantech to cloud computing and semiconductors — all areas Intel is probably beginning to branch out into, since the company is hoping to put chips in just about everything in existence. The announcements are timed to the Intel Developer Forum, which started yesterday with a keynote speech by Intel chief executive Paul Otellini (pictured).

The four companies receiving funding include: Provo, Utah-based Adaptive Computing — which provides cloud-computing and data-center software; Santa Clara-based Ciranova, a chip designer; San Francisco-based Joyent, a provider of cloud computing infrastructure that Intel Capital had formerly invested in; and San Francisco-based Nexant, which provides software to help with energy efficiency and clean energy solutions. Joyent received $15 million of the funding round, while the rest was undisclosed.

The funding comes as part of the $3.5 billion effort launched in February by multiple venture capital firms led by Intel Capital to help provide jobs for college graduates interested in working in the tech field.