As a futurist, Brian David Johnson gets paid by Intel to talk about the future. A decade ago, he started writing about a social humanoid robot named Jimmy. Today, he showed it off at the Intel Developer Forum.

Jimmy the Robot is based on Johnson’s vision for what robots could become at an advanced stage of evolution, particularly when they become as ubiquitous as smartphones are today.

Johnson said older robots were once large and purpose-built, like big old computer servers in data center cabinets. In the 1990s, we started seeing robots like Roomba, made by iRobot to automatically clean your house. Those were like the equivalent of laptop computers. Johnson wanted to make something more like the robot equivalent of a smartphone. 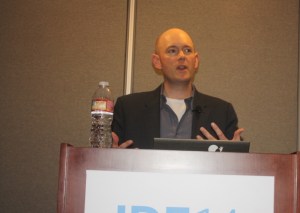 “I wondered if we could build one that is low-power, mobile, fiercely social, and you can program using apps,” he said at a press event. “What would those robots be like? We have an amazing number of robots now.”

Johnson teamed up with an artist, Sandy Winkelman,  to create a cute robot. The cuteness was necessary to get past the notion, popularized in films like Terminator, that robots are dangerous.

Johnson and Winkelman made the robot small enough so he wasn’t threatening. Johnson wanted it to be based on open source technology, and embraced by the Maker movement, for do-it-yourself hardware hobbyists. He wanted it to be easily programmable by non-programmers. He wanted everybody to be able to create their own robot and give it a name.

At the Maker Faire in New York City, Johnson unveiled Jimmy the Robot. The result, Johnson said, “was that nobody can resist a cute robot.” 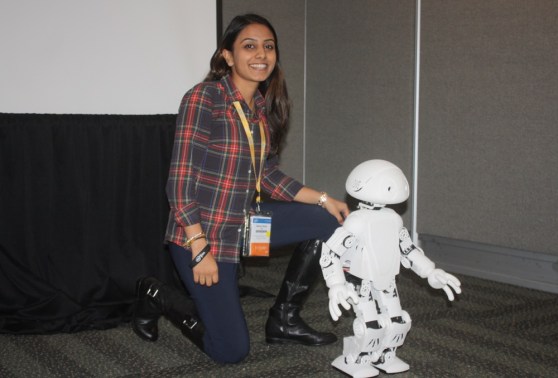 Above: Naomi Shah with Jimmy

Naomi Shah, an undergraduate at Stanford University, did an internship at Intel this summer and created her own program for Jimmy. She was concerned about air pollution because members of her family have severe allergies. So she programmed Jimmy and its built-in sensors to detect air pollution indoors (about 90 percent of our time is spent indoors).

She created an app dubbed “Air. Aware. Action.” She used Intel’s development kit to create her app, programming Jimmy to detect indoor pollutants and how they affect our health. Jimmy can detect in real-time the level of harmful indoor pollutants in a room and help people make smarter decisions about what they have in their homes.

She used a Grove pollutant measurement system with Jimmy’s Arduino hardware. She got real-time data measurements of the pollutants, and she built it into an app that others can use to create their own similar apps related to air quality measurement.

Johnson said he was impressed with how much progress Shah made in such a short time.

“Robots will be as common as smartphones and laptops,” Johnson said.

Johnson let one version of Jimmy walk around the floor at IDF. Jimmy said, “These are not the droids you are looking for,” quoting from the original Star Wars movie. He also said, “You should follow me on Twitter.”

One experimental version of Jimmy uses an Intel Core i5 processor. That one costs $16,000. But a new version, which uses an Intel Edison internet-of-things processor, costs just $1,600.

This is all part of Johnson’s job. He has a book coming out later this year about Jimmy.

“I write a spec about what will happen in 10 years,” he said.

Watch a video of Jimmy in action below.