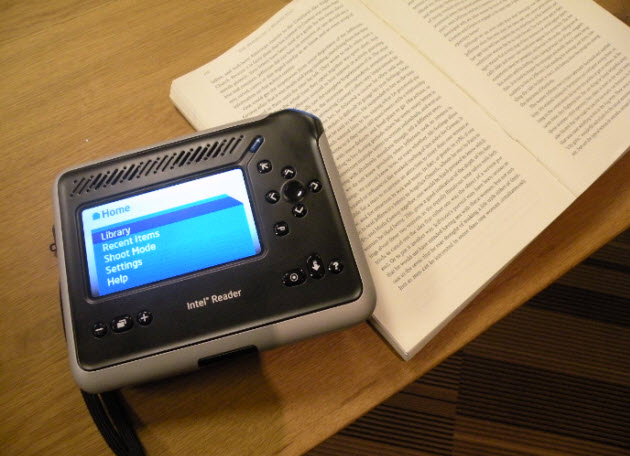 Ben Foss grew up with dyslexia, a learning disability so severe that his mother had to read books to him throughout his school years, all the way through college. Now 36, he is spearheading the launch of a remarkable device from Intel that can read electronic books aloud to the blind or visually impaired.

The Intel Reader is available today for $1,499.That’s a pretty hefty price, considering that devices like the $259 Amazon Kindle can read books aloud in a robotic voice. But the Intel Reader is based on a lot of research and is designed for the visually impaired, first and foremost.

The reader can read digital files of books aloud. It can also capture images from any printed material and use its text-to-speech technology to read aloud the publication at a variety of listening speeds. It also has a four-inch color display that can render the words being read in large font sizes. The device can read millions of books that have been formatted online for visually-impaired readers, and it comes with a high-resolution camera that can convert printed text to digital text. The reader can then read the words aloud to the user. It can even work with web pages if users first capture the text from a site in a plain text file. 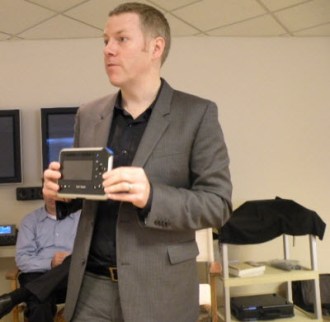 “We want people to experience the independence of being able to read on their own in a public place or anywhere they want to,” said Foss (right), speaking at a press event on Monday. “A metaphor for this are the ramps that make buildings wheelchair accessible. This reader is like a ramp.”

The paperback-sized device is aimed at 55 million people in the U.S. who have eyesight problems and don’t want to be dependent on others for the pleasure of reading a novel, looking at a restaurant menu, or reading web site pages. It comes with a 5-megapixel digital camera that can be used to snap pictures of book pages. Foss said he was able to scan a 262-page book in a half hour and listen to the first chapter of the book while he was doing it. The device can read text in the DAISY format, plain text, as well as MP3 music files.

The product is a result of years of research in Intel’s Digital Health Group, headed by Louis Burns. The aim is to use technology to improve quality of life. That group has devised technologies that allow patients to be monitored remotely so that they can stay home rather than be monitored in an expensive hospital. Intel hasn’t had the best history with consumer products, but Foss says the world’s biggest chip maker is committed to the project and to the digital health market.

There are ways to use personal computers and digital cameras to do the same thing with text-to-speech software. But the Intel Reader attempts to take the hassle out of the process. Other devices have not been designed directly for the visually impaired, said Dorrie Rush, who is visually impaired herself, and works as the marketing director for the nonprofit Lighthouse International, a foundation that helps the visually impaired. However, the KNFB reader, backed by futurist Ray Kurzweil, has been around for a couple of years and is designed to work with Nokia N82 or N86 cell phones.

Intel has done its homework on the device, said Rush. That’s why it has support from Rush’s group as well as other charitable instituions including the National Center for Learning Disabilities, the International Dyslexia Association, the Association of Assistive Technology Act Programs, the Council for Exceptional Children, and the National Federation of the Blind. But Foss noted Intel sees the reader as a for-profit business.

Foss noted that the packaging comes with Braille lettering that identifies its manuals. It also has an audio CD that tells users how to use the device. The device does not come with built-in Wi-Fi networking because many school don’t allow web-connected devices in the classroom.

Rush, said that there are 15 million people like herself with impaired eyesight that can’t be corrected with lenses. She held a newspaper four inches from her face and noted she could only read the name of the paper and nothing else. 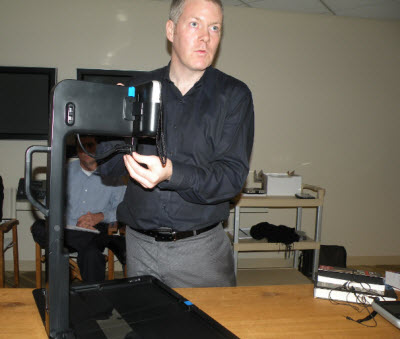 Foss said Intel tested its prototypes with more than 400 visually-impaired users, including some with partial eyesight and some who were completely blind. The device can come with an Intel Portable Capture Station (right), which costs extra. The station can be used to capture images of an entire book. It has a plastic guide that holds pages down while the camera can be placed overhead. The button for placing the images is low on the station, since many visually-impaired people are older and don’t have the strength to keep raising their arms to take pictures. ‘The image capture works even if a book is placed upside down.

The device has an Intel Atom microprocessor and two gigabytes of flash memory storage. It runs Linux software and some third-party software for scanning and reading aloud. With a fully charged battery, the device can read aloud for four hours. It can last for days on standby power. It can store about 500,000 pages of text or 600 pages of scanned book pages.

One of the cool features is the ability to change the speed of the voice reading. If you set it to 110 words per minute, it sounds like a normal, if robotic-sounding, voice. At 250 words per minute, it sounds like a chipmunk talking. But Foss said that is the speed he listens at when he is trying to absorb a book quickly. The voice sounds less robotic with headphones, and even less so if it is set to a mode that emphasizes things like exclamation points. In that way, it can be used for informational reading or entertainment.

The Intel Reader will be available through resellers such as CTL, Don Johston, GTSI, Howard Technology Solutions and Human Ware. Foss acknowledged that the price of the device isn’t cheap, but he noted that the device has a lot of custom-designed components, and it is cheaper than devices such as Braille readers,which can cost up to $10,000. Some devices for the blind take a long time to learn, but the Intel Reader takes only a few hours to internalize, Rush said. Since Intel had priced the device fairly high, there is a risk that it will be undercut by eBook readers that can be converted to handle reading aloud.

Foss said there are a variety of sources for the books, including the Gutenberg Project and Book Share. The Internet Archive has 1.6 million books available to be read aloud. That includes out-of-copyright books such as Moby Dick or Alice in Wonderland. He noted that copyright law allows readers to make a copy of a book for their own personal use. On top of that, there is an exception to the law that allows books to be copies for use by disabled people.

The device isn’t perfect at capturing all of the nuances of print. In scanning a newspaper, for instance, it may have trouble with layouts that blend columns of different stories together. It isn’t really made for capturing and translating street signs either.

Over time, the company plans to introduce international versions of the device. Within a week or so, it will launch the device in the United Kingdom where it will use a speaking voice with an English accent. Here’s a video of Foss demonstrating the product.