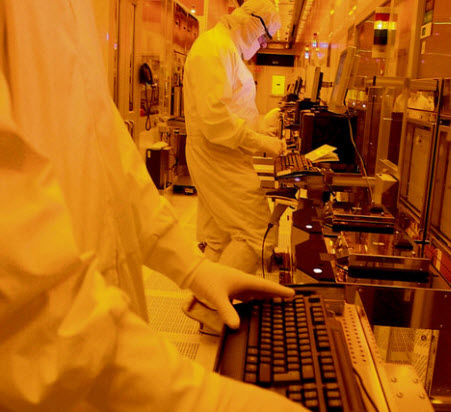 Intel said it wil invest $6 billion to $8 billion on its new chip factories in a move that will create thousands of construction and engineering jobs.

The world’s biggest chip maker said it will create 6,000 to 8,000 construction jobs and 800 to 1,000 permenanent high-tech jobs at its manufacturing sites in Arizona and Oregon.

The money will create a new development fab (short for wafer fabrication plant), or a factory for building prototype chips, in Oregon as well as upgrades to four fabs that will manufacture chips with 22 nanometer process technology. That process technology can create circuits that are just 22 nanometers apart (a nanometer is a billionth of a meter). Chips that use this process will be faster, cost less, and have longer battery life.

The investment is a typical one for Intel, and it shows that the company is likely to generate enough cash to fund its capital projects, even though it spent a lot of cash ($7.68 billion) buying McAfee. Intel confirmed that it will make no changes to its capital spending plans that it shares with Wall Street.

“Today’s announcement reflects the next tranche of the continued advancement of Moore’s Law and a further commitment to invest in the future of Intel and America,” said Intel chief executive Paul Otellini.  “The most immediate impact of our multi-billion-dollar investment will be the thousands of jobs associated with building a new fab and upgrading four others, and the high-wage, high-tech manufacturing jobs that follow.”

PC makers are shipping a million PCs a day now and Intel supplies microprocessors for roughly 80 percent of them. Intel also makes chips for mobile and computing markets. Each capital outlay is an act of faith by Intel that there will be enough demand to keep its factories busy in a year or two as it completes the new fabs.

Intel noted that it generates three-fourths of its revenue overseas while keeping three-fourths of its microprocessor manufacturing in the U.S. Intel announced its last major capital spending projects in February, 2009, when it was installing its first 32-nanometer fabs as part of a $7 billion investment. Intel’s first 22-nm chips, code-named Ivy Bridge, will be in production in late 2011.