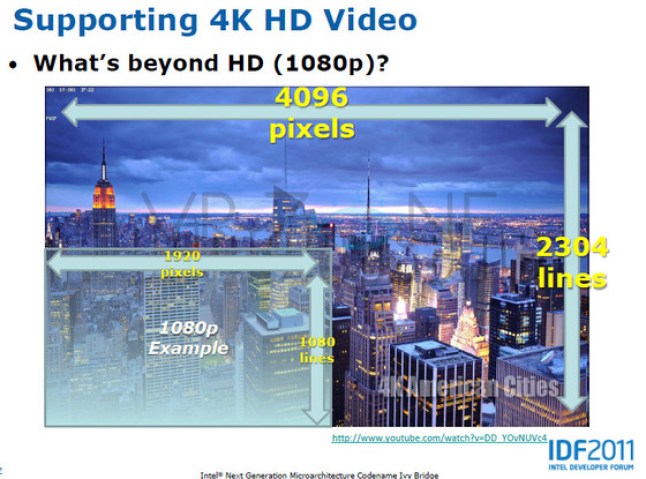 It used to be that integrated graphics chipsets could barely run a simple DVD properly. But come next year, the integrated graphics in Intel’s upcoming Ivy Bridge processor will be able to power eye-bleedingly sharp 4K high-definition video at massive 4K resolutions, VR Zone reports.

In comparison, Intel’s current Sandy Bridge graphics chipset only supports a maximum resolution of 2,560 by 1600. The additional graphics horsepower in Ivy Bridge means that a mere laptop will be able to power huge pro-grade displays, as well as have the ability to decode 4K HD video. To match that performance today, you’d need to invest in expensive graphics cards (and forget about doing it on a laptop).

Sporting a resolution of 4096 by 2304 pixels or more, 4K HD is the next major leap in video quality after 1080p HD video, the standard resolution for Blu-ray video, and the current maximum resolution for most HDTVs. With support for the 4K HD built-in, computers running Ivy Bridge processors will be able to play back massive video files without a sweat. In fact, according to Intel, Ivy Bridge will be able to juggle multiple 4K videos at once.

Of course, Intel’s Ivy Bridge graphics will also feature faster 3D graphics capabilities, but its support for 4K resolutions will likely be a good investment over time. We’ll likely be seeing 4K computer displays become more affordable within several years (right now the only such entry costs around $36,000 dollars), and 4K will eventually make its way into our living rooms (home projectors supporting 4K are just now being announced).