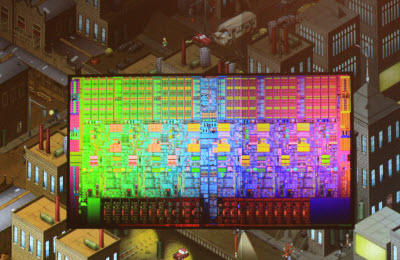 The racks and racks of servers in Internet data centers are about to get more efficient. Intel is launching a series of new server chips today that deliver a lot of bang for the buck.

The new Intel Xeon processor 5600 series chips have as many as six cores, or computing brains in a chip.  They have other features that, taken together, allow a server with just one Xeon 5600 chip to replace 15 single-core servers from five years ago. The investment in the new chip can pay off in as little as five months if it is used to replace five-year-old servers, said Boyd Davis, general manager of data center group marketing at Santa Clara, Calif.-based Intel. The new chips are also setting performance records in server benchmark tests.

These chips are arriving at the right time. Gartner estimates that about a million servers that should have been replaced have not been replaced during the recession. Intel itself estimates that about 80 percent of existing servers should be replaced because they’re wasting energy and money in comparison to the new server chips. Intel says that the cost of not replacing 50 single-core servers with three Intel Xeon 5600 servers is $10,000. 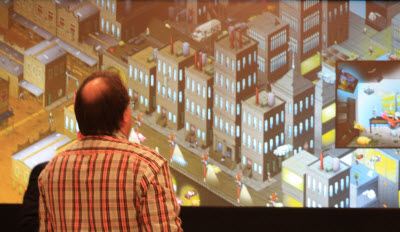 The chips, formerly code-named Westmere, are the second generation of Intel’s 32-nanometer processors (made with a 32-nm manufacturing process that allows chips to be made faster, smaller and cheaper). Intel launched its first 32-nanometer server chips, code-named Nehalem, in the spring of 2009. Those Nehalem-based chips have been among the most successful Intel has ever launched.

To give a perspective of the performance increase, Intel showed reporters a mural on a huge projection screen at an event in San Francisco. A chip, Davis noted, has so much detail on it that it looks like a giant city when viewed as in the above picture. One side of the mural depicted the Gold Rush, when chips in the good old days had very little detail on them, like a small mining town. Then chips got more complicated, resembling Industrial Revolution cities. Now they’re so crowded and futuristic, they look like cities of the future. The security has moved from a small-town Sheriff to constant monitoring via surveillance cameras. 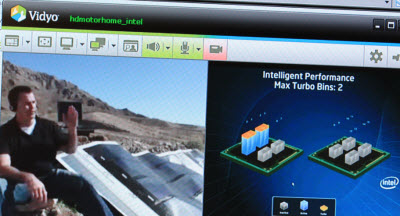 The new 5600 series chips have  as much as 60 percent better performance on real-world server applications, Davis said in an interview. The server chips will also deliver the same performance as the Nehalem-based chips but with 30 percent lower power usage, which translates into energy savings. To demo that capability, Intel set up a couple of servers in the Nevada desert, powered by a single solar cell array and connected via WiMax to a wireless Internet network (image right).

Advanced Micro Devices has already launched its own six-core chips. AMD will launch its own new 8-core and 12-core server chips later this month. The Sunnyvale, Calif.-based rival says its upcoming Magny Cours chips will be 33 percent more memory efficient than Westmere.

Intel says its new chips will also have better built-in security. The 5600 series chips will include Intel AES-NI, a new set of instructions that will enable faster encryption and decryption of data. The frequency of the four-core version of the 5600 series tops out at 3.46 gigahertz with power usage of 130 watts, while the six-core version tops out at 3.33 gigahertz and 130 watt watts. Lower-power versions are also available.