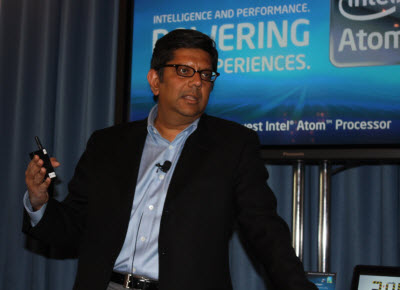 In a bid to move beyond the PC, Intel is announcing a new generation of its Atom microprocessors today that can become the brains of smartphones and tablet computers with high performance and long battery lives.

The new chips can get by on 50 times less power than previous Atom chips and provide twice the computing power of similar devices in the market today. The message for consumers: if you’re impressed with performance of Apple iPhones and iPads today, you haven’t seen anything yet.

The gains in performance and power efficiency are pretty astounding. With these new Atom Z6xx series chips, smartphones could run at 1.5 gigahertz and still have an idle time battery life of 10 days. Smartphones using the chips could run video for four or five hours before running out of battery.

They could run music for two days straight and run smartphones with screens that are 3.8-inches diagonally. Tablet computers can use a 1.9-gigahertz version of the chip — that’s far faster than the ARM-based A4 chip that Apple created for its iPad tablet computer (using Samsung as a manufacturer). Those tablets can be as thin as 15 millimeters. 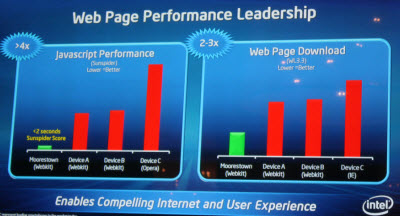 Intel was able to achieve the faster performance and lower battery life through a combination of chip design, investments in advanced process technologies for its chip factories, and software. For instance, the chip designers divided the chip into 19 different “power islands,” each of which could operate on a different power settings. That means that sections of the chip that aren’t being used can be turned off. It’s a common technique that others use as well, but it shows that power efficiency has been designed very deeply into the chip. The new Atom is also good at waking up from sleep mode and going immediately into processing tasks as needed. That means users won’t have to wait so long when they switch tasks.

Intel has very high hopes for the market. Anand Chandrasekher, senior vice president and general manager of Intel’s Ultra Mobility Group, said at a press event that Intel believes there will be 10 billion connected devices and a billion new connected users by 2015.

In a demo, Intel showed that it could run a full video conference on an Avaa Mobile prototype smartphone at the same time it is playing a high-definition video. Intel contends that the graphics performance is two to four times better than today’s devices. The chip can run games such as Quake III at 100 frames per second — a pretty speedy performance for a portable computing device.

The new Atom chip incorporates things that were in separate chips before. It integrates 3D graphics from Imagination Technologies. It also has video and display processing built into the microprocessor. In demos, the company showed that a prototype phone with the chip could do good quality 3D graphics. 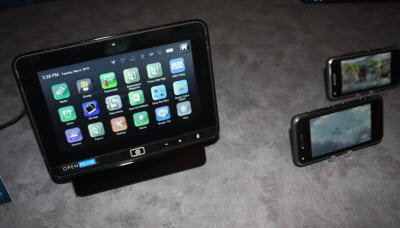 Chandrasekher said that the Atom Z6xx chips are in production now and Intel has received revenues already. But he wouldn’t identify any customers. One of the only announced customers is Open Peak, which is doing a kind of iPhone for the living room or kitchen. (pictured, right).

Pricing for the chips hasn’t been disclosed. Smartphone platforms typically are produced for $175 and Intel says its prices will be low enough to fit within that kind of platform.

Analyst Tom Halfhill said the chip means that Intel can finally get into the party in the smartphone business, but it faces tough competition from Qualcomm and Texas Instruments, as well as other strong players such as Broadcom, Nvidia and Marvell. 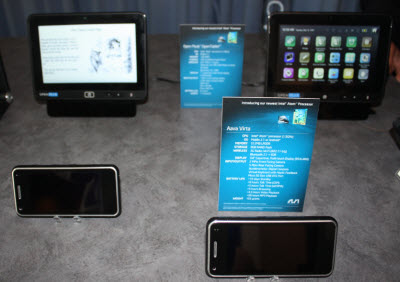 But Intel isn’t stopping here. It is working on a future Atom platform, code-named Medfield, which it will provide more details on in the second half of the year. Jeff Bier, an analyst at Berkeley Design Technology, said, “The stakes are clearly going up for the chip makers. This is a huge undertaking. It’s so expensive and risky to make a chip like this. The ante for this game is $100 million.”

The new Atom chips will be able to run the Moblin version of Linux as well as MeeGo. It will also run the Android operating system. But, interestingly enough, will not run the Windows Mobile operating system of longtime partner Microsoft.