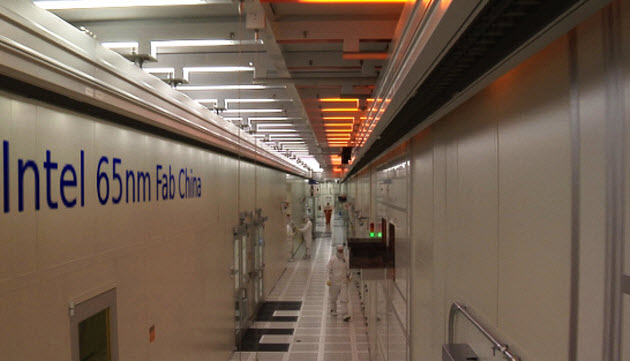 In another sign that China is moving up the food chain in manufacturing, Intel said today it has opened its first-ever chip manufacturing plant in Dalian, China.

The $2.5 billion factory, which is the size of bout 23 football fields, will be the first to fabricate microprocessors from raw silicon. Intel has relatively low-tech assembly factories in China (in Chengdu), where automated machines assemble chips into packages and test the final product, but this new factory, known as a wafer fabrication facility, or fab, will make the actual chips. Announced in 2007, the factory is now fully operational.

Intel set up its first operations in China 25 years ago.

The new factory raised eyebrows because of concerns around China’s frequent misappropriation of intellectual property and worries that a vital technology could fall into the hands of a potential adversary. But Intel is not making its most advanced 22-nanometer chips in China. Those chips will be made in factories in Arizona and Oregon, Intel recently announced as part of a plan to spend $6 billion to $8 billion on new factories. To date, Intel has spent $4.7 billion in China. The new factory will be used to make 65-nanometer chips, which are about three generations behind the leading edge. (Intel comes up with a new generation of chips every two years). A nanometer is a billionth of a meter.