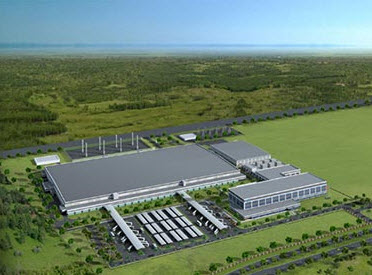 Intel said Friday it has opened a $1 billion chip testing and assembly factory in Vietnam.

Normally, chip makers spend as little as $100 million on assembly and testing facilities, which take finished chips and package them. Wafer fabrication factories, on the other hand, make the actual chips and cost as much as $3 billion. Intel opened a new $2.5 billion wafer fab in Dalian, China, earlier this week.

But this testing and assembly facility is the biggest in the world, with a total area of 46,000 square meters, or about five and a half football fields. The automated machinery in the factory will test chips for defects and then place them inside protective packages. The Vietnam facility will likely create several thousand jobs. It is located in the Saigon Hi-tech Park (in an area called District 9, which to me evokes the 2009 sci-fi film), in Ho Chi Minh City.

Attracted by Vietnam’s skilled labor force, Intel opened its first office in Vietnam in 1997. Construction on the assembly plant began in 2007.  The plant does most of its work on chip sets for mobile devices and laptops.