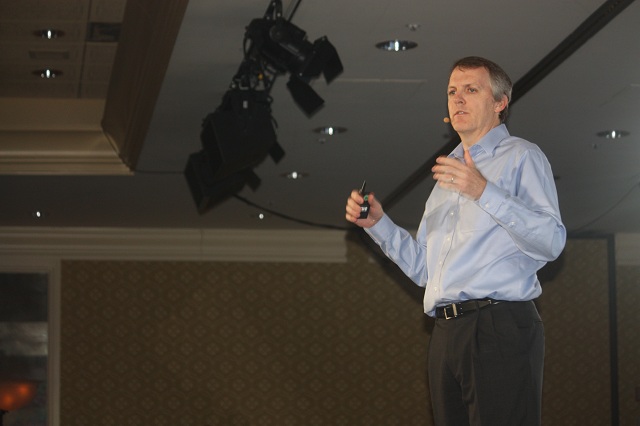 Intel’s major marketing campaign for 2012 will focus on advertising its Ultrabook brand of ultra-thin, high-performance laptops.

98 percent of the social media reactions to “Ultrabook” are positive, and that’s with very little advertising already, Kevin Sellers (pictured), vice president of sales and marketing and director of the advertising and digital marketing group at Intel, said at the company’s press conference today at the Consumer Electronics Show in Las Vegas.

Intel will launch its Ivy Bridge microprocessors soon and will tie its Ultrabook campaign to the launch of those chips this spring.

“By April, the marketing engines of Intel will turn on,” Sellers said.

It will be the biggest campaign since Centrino, the successful 2003 campaign that tied laptops and WiFi to easy internet access. That campaign ushered in the era of mainstream wireless computing and helped seal Intel’s high market share in laptop chips.

Sellers hinted that singer Will.i.am would be part of the marketing campaign and that Paul Otellini, chief executive of Intel, will talk about that in his CES keynote on Tuesday.