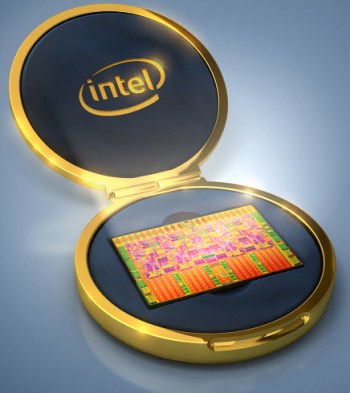 Just in the time for the recession, Intel is rolling out Monday its latest high-end family of microprocessors, the Core i7.

The chips have four cores, or processing brains, and are based on the company’s code-named Nehalem architecture. There will be three models for high-end consumer desktop computers and gaming machines.

It’s a big step forward for Intel, but the big question at the moment is whether anyone will buy it, given the severe recession. Intel has already shaved a billion dollars in revenue from its fourth-quarter revenue estimates.

More than 18 computer makers are expected to begin selling high-end consumer and gaming computers based on the i7 Core. The chips are the second generation based on Intel’s most advanced manufacturing process, which creates circuits that are 45 nanometers in width.

The chips will be a big competitive shot at Advanced Micro Devices and will keep Intel at the top of the consumer high-performance market. AMD, meanwhile, launched its latest chips at the server market. Intel’s Nehalem-based server and mobile chips will ship sometime next year. Hence, while Intel has the crown in consumer chips, AMD will be more competitive in server chips.

The Intel chips are significant because they have built-in memory controller and Intel QuickPath interconnect. Those features steal a page from the architecture popularized by AMD with the Opteron server chips that launched in 2003. So after five years, Intel is finally closing a gap with AMD on memory and power efficiency.

Intel will also have advantages in being able to run two threads, or the equivalent of two programs, on each core. It will also support a faster memory known as DDR3. In its marketing collateral, Intel is calling the chip family the “fastest microprocessor on the planet.”