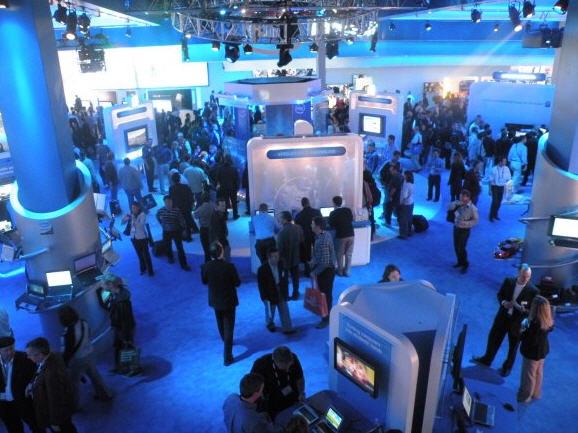 The gloomiest of earnings seasons kicked off today. Intel‘s revenues and profits cratered in the fourth quarter because of the global economic meltdown.

Sales for the quarter were $8.2 billion, down 23 percent from a year earlier and down 19 percent from the third quarter. The drop in sales from the third to fourth quarter was only the second time in 20 years that such a drop occurred — the last time was at the end of 2000 during the dotcom crash.

Net income plummeted 88 percent to $234 million compared to a year ago, largely because of a $950 million write-down of Intel’s investment in wireless broadband firm Clearwire. Operating income was $1.5 billion, down 50 percent from a year ago.

The world’s biggest chip maker is a bellwether for the PC industry. As Intel goes, so goes Silicon Valley and the tech economy as a whole. The results were slightly worse than Intel’s warnings. For the first quarter, the company decided not to make a formal forecast on its financial targets as it usually does because of the financial uncertainty, but it did say that it was internally planning for revenue of about $7 billion. Analysts estimated sales in the first quarter of $7.18 billion, according to Bloomberg. Overall, Intel did a good job of controlling what it could. In general, it’s been executing in the past couple of years better than its chief rival, Advanced Micro Devices.

Paul Otellini, chief executive of the Santa Clara, Calif.-based company, said that inventories have built up because manufacturers are still working through existing chip supplies. The exception to that is Intel’s Atom processor, which along with Atom-related chip sets hit $300 million in revenue in the quarter. The Atom processor targets low-cost portable Internet devices, dubbed netbooks, which are smaller than traditional notebook computers.

Yet Otellini said the evidence shows so far that netbook sales are not cannibalizing traditional laptop sales. He said netbooks were a source of excitement at the International Consumer Electronics Show in Las Vegas last week.

The news cheered the market, which had anticipated even worse news than Intel reported. Intel’s stock rose 3.6 percent to $13.77 a share in after-hours trading. But the stock is still trading near its 52-week low of $12.06.

Otellini said it isn’t clear when the economy will recover. Intel has too much capacity on hand today, but Otellini anticipates that the over-capacity will start to subside in the second quarter of 2009, possibly leading to better results in the second half of 2009. In the meantime, Intel projects that its gross margins — which at 53 percent were down 6 percentage points from a year ago — would hit the low 40s in the first quarter. That reflects a slowdown in production.

There are some bright spots. Intel isn’t pulling the plug on spending for its chip factories. For 2009, the company expects capital spending in 2009 to be flat or slightly down from $5.2 billion in 2008. Research and development will be $5.4 billion. Intel expects to continue to invest in 32-nanometer manufacturing technology (which lowers costs and is more efficient) for big-time production in 2010.

For 2009, analysts anticipated revenue of $30.5 billion, down 20 percent and the worst drop since 2001. The company didn’t talk about whether it would cut back staff. It ended the quarter with 84,000 employees, down three percent from a year ago and down 16 percent from its peak in 2005. Intel did say it would cut another $700 million in spending in 2009. In response to a question, Otellini said that upcoming price cuts are nothing unusual but are rather a reflection of normal improved efficiencies in production.