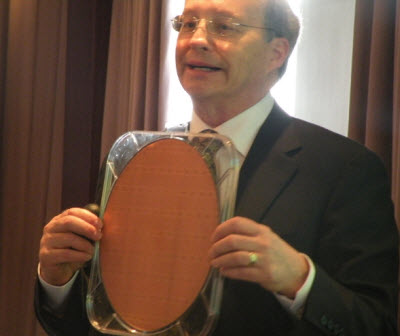 Intel showed off an experimental version of a 48-core microprocessor today that the company called a “single chip cloud computer.”

With 48 cores, or processing brains, the single chip has 10 to 20 times the number of cores that Intel normally puts on its PC chips today. The company isn’t saying when it could do a commercial version of this chip, but it will make 100 of them for use in academia. Still, the research project offers a glimpse into the future of computing when processors are a dime a dozen.

The goal of making the prototype now is to help programming experts figure out how to create software for such a chip. Intel made an experimental “terascale” chip with 80 cores in 2007. The research effort has been under way for about five years, said Justin Rattner, chief technology officer of Intel, at a press conference. Rattner said there are fewer cores on the new chip because each one is more sophisticated and able to do more processing tasks.

The new chip operates in a more energy efficient way, said analyst Jon Peddie of market researcher Jon Peddie Research. The 48-core chip operates on as little as 25 watts, which is typical for a lot of laptop computers. It operates at 125 watts when at maximum performance. The chip is more power efficient in part because it has 24 sections, each of which can operate at a different speed, and there are eight sections operating at different voltages. 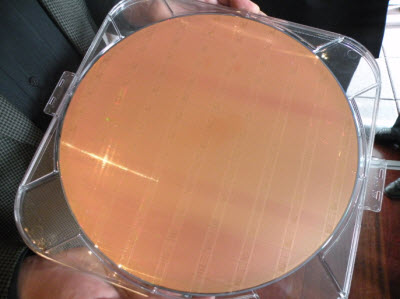 Rattner said the chip is different from its commercial graphics chip code-named Larrabee, which also has a lot of cores on a single chip, all aimed at visual computing tasks. This chip is focused on cloud computing, or processing huge amounts of data within servers inside corporate data centers. The hard part about chips with lots of cores is programming software to efficiently make use of all of the cores.

A machine using the chip could be capable of tough computing tasks such as better machine vision, or interacting with a computer for a virtual dance lesson or using a 3-D camera that shows you a mirror of how you would look wearing clothes you might want to buy.

Computers of the future will try to mimic things humans can do well, Rattner said, such as recognizing, hearing or understanding the physical world. Intel built the chip with a 45-nanometer Hi-K metal gate silicon manufacturing process, which is the process Intel uses to make its newest commercial microprocessors. The chip has 1.3 billion transistors, the basic building blocks of chips, and it was designed by 40 researchers around the world. Intel’s first microprocessor in 1971 had about 2,300 transistors.

Intel is in the process of signing up dozens of academic partners who will receive the chips for research. Among the partners is Microsoft’s research division.

[Photos: Rattner holds a wafer, which has many chips on it.]