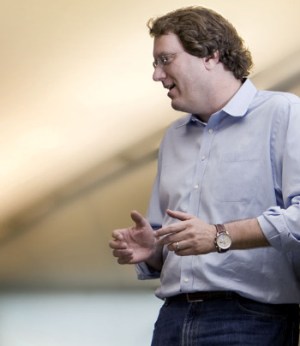 Palm’s brain drain continues as it loses another executive to a major competitor. Mike Bell, most recently senior vice president for Product Development at Palm, has moved on to a similar role at Intel’s Ultra Mobility Group as Director of Smartphone Product Development, Engadget reports.

In an internal email, Intel said that Bell “will help build and lead a team to build breakthrough smartphone reference designs to accelerate Intel Architecture into the market.”

Bell was a “good get” for Palm. In 2007, the company managed to lure him away from Apple, where he spent 16 years working on a variety of projects including the iMac, Apple TV, and iPhone. His defection from Apple reportedly led to “screaming matches and threats of lawsuits” from Apple, according to Valleywag. It apparently infuriated Apple CEO Steve Jobs to such a degree that Palm didn’t dare to announce his hiring publicly. At Palm, he worked on the development of the Palm Pre and Pixi under CEO Jon Rubenstein, another Apple veteran.

Bell’s move to Intel marks yet another high-profile defection for Palm. In April, Palm lost Michael Abbot — its senior vice president of software and services — to Twitter, and offered stay packages to other key employees to keep them from straying. Shortly after that, HP announced it would buy Palm for $1.2 billion.

More recently, WebOS user interface designer Matias Duarte left Palm to work on Android at Google, and webOS notification mastermind Rich Gerringer moved to Apple. With all of this high-profile brain drain, it appears that HP’s Palm acquisition may end up being more for webOS and Palm’s hardware, and not necessarily for the talent behind them.

Intel has missed out on the booming smartphone market thus far, and left the door wide open for mobile processors and architecture from ARM Holdings to invade. Its Cortex A8 processor powered the iPhone 3G S, Motorola Droid, and many other smartphones. Qualcomm used it as a building block for its Snapdragon processors, which run at 1-gigahertz or more on phones like the Evo 4G and Droid X. ARM is planning its next generation of chips, the Cortex A9, which aim to be even more efficient and powerful.

Intel plans to invade the smartphone market with its upcoming Atom Z6xx chips, which will run at 1.5-gigahertz and be efficient enough to run music for two days straight, and video for four or five hours-a-day. The company says that Bell “will focus on delivering leadership products that advance Intel chips into smartphones, help drive new business growth and further cultivate Intel’s global ecosystem relationships in this market segment.”