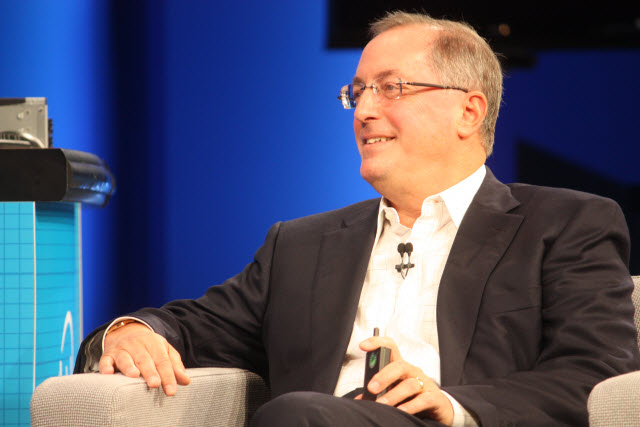 Intel showed a demo of its hybrid graphics-microprocessor chip today, a chip that’s aimed at eliminating the need for a stand-alone graphics chip in personal computers.

Code-named Sandy Bridge, the hybrid chip is a threat to the maker of stand-alone graphics chips such as Nvidia and Advanced Micro Devices. AMD is creating its own rival hybrid chips, but not Nvidia. Paul Otellini, chief executive of Intel, said the company would begin shipping the Sandy Bridge chips in “very high volume” in the first half of 2011.

“Sandy Bridge will revolutionize the PC,” Otellini said. “This is a very important chip to Intel.” 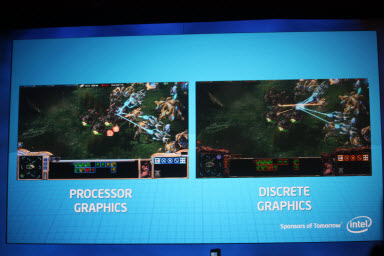 Otellini showed a working version of the chip in a laptop on stage during his keynote at the Intel Developer Forum, a conference for Intel developers that began today in San Francisco. In the demo, Otellini showed that the chip could run Starcraft II: Wings of Liberty, the most popular PC game on the market, without flaws. The demo ran side by side with a version of the game running on a stand-alone graphics chip.

Nvidia says it isn’t threatened by Sandy Bridge, which it says is akin to a “turboprop in an age of jet engines.” The company says that its graphics chips can run DirectX 11 graphics, which meets the highest standards for graphics on computers today. It’s also worth noting that StarCraft II is not the most demanding game when it comes to 3D graphics. The majority of readers polled in our story last Friday on Sandy Bridge believe that Intel won’t kill off the stand-alone graphics chip. 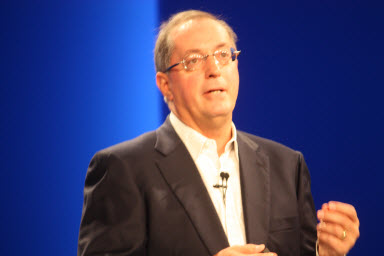 Intel launched a combo chip last year that glued together two chips in a single package. But Nvidia laughed that chip off as brain-dead when it came to running the top 30 computer games. But this second-generation effort, Sandy Bridge, combines the two chips into one and poses a greater threat to Nvidia. Anand Lal Shimpi, a noted hardware reviewer at Anandtech, said he thinks entry-level GPUs will be unnecessary in the wake of Sandy Bridge’s introduction.

Sandy Bridge does have some features that aficionados will appreciate, such as the ability to display stereoscopic 3D Blu-ray videos and high-definition TV. It can support the Intel Wireless Display, which can display the image on your laptop on the big screen TV in your home. And it will have high-performance transcoding, or the ability to translate video from one format to another so that it can run on just about any device. Intel said its goal was to improve its graphics performance by 10-fold from 2006 to 2010. With Sandy Bridge, it has hit a 25-fold improvement.

Intel recognizes that it isn’t going to kill off the market for $600 graphics cards that hardcore gamers want. But the market trends favor its direction, Intel said. By 2014, about 80 percent of the PCs shipped are expected to have hybrid chips (which Intel calls Processor Graphics), according to market researcher iSuppli.

After Otellini’s speech, Intel executive Dadi Perlmutter showed that Sandy Bridge, with four processing cores (or brains), can dynamically shift from high-power to low-power modes as needed to preserve a laptop’s battery life. Otellini said the hybrid chips can be used in both laptops and all-in-one desktop PCs, which combine a monitor and computer in the same chassis.

In a post-keynote session, Intel fellow Tom Piazza said that Intel’s Sandy Bridge chip will not run DirectX 11 graphics, but he noted there are very few DirectX 11-only games now and most will default to earlier technology. He also said Intel’s chip will run most mainstream games, but not the high-end games. The typical use-case will be that someone will use productivity applications on a laptop during the day that do not require much graphics performance and do not strain the battery. Then they can go home at night and play high-end games that consume more power.

Otellini said Intel’s goal with Sandy Bridge is to target the mainstream computing market. He noted in his talk that 1 million PCs are being sold a day now. Here is some video of Otellini and Perlmutter at the press Q&A after the speech.