The move is part of Intel’s effort to establish its lightweight microprocessors such as the Atom chip and underscores that Intel is making a big push into software for managing devices such as smart phones, mobile Internet devices, car entertainment systems and other gadgets for which Wind River helps provide embedded software. 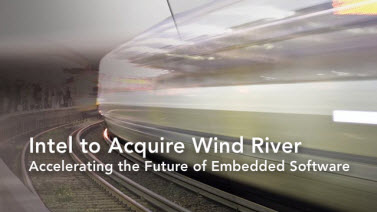 The deal makes sense on a systems level, but it also brings Intel into a new age of competition with some of its traditional partners, including Microsoft, whose Windows CE operating system directly competes with Alameda, Calif.-based Wind River.

Wind River’s board has approved the deal, which is subject to regulatory approval and is expected to close this summer. Wind River will become part of Intel’s software and services group, headed by Renee James.

Wind River has been around since 1981. It has 1,600 employees and revenues of $359.7 million for the fiscal year ended Jan. 31, 2009. Among its thousands of customers are Alcatel-Lucent, BMW, Boeing, Bombardier Transportation, Mitsubishi, Motorola, NASA, Sony, and Verizon.