For more than a year, under the stewardship of Intel CEO Brian Krzanich and new chief marketing officer Steve Fund, Intel has been transforming its brand image. Rather than just focusing on the invisible ingredients it puts inside tech products, the company is implementing a new marketing blitz to focus on the amazing products and services that Intel enables.

Intel will still keep its decades-old Intel Inside campaign, but will add a new cool factor. You can think of it as the same brand with a new tagline, “Amazing Experiences Outside.” An ad debuting today will show some truly amazing visuals, from a dress with artificial butterflies flying around it to a prosthetic limb that enables a man to walk. It has taken a couple of major keynote speeches and more than a year of planning to fully articulate this strategy shift, but it looks like the company is ready to share its new identity with the world.

The commercial is set to Beethoven’s “Symphony in Blue” and features a performance by musician Kawehi. Most of the digital experiences in the ad are enabled by Intel’s newest core ingredient, the Curie module, a chip and complete computing system for wearable devices and Internet of Things devices (everyday objects that are smart and connected). Curie is moving into volume production, and it will be sold for under $10, Krzanich announced during his keynote speech at the 2016 International CES, the big tech trade show that recently took place in Las Vegas. 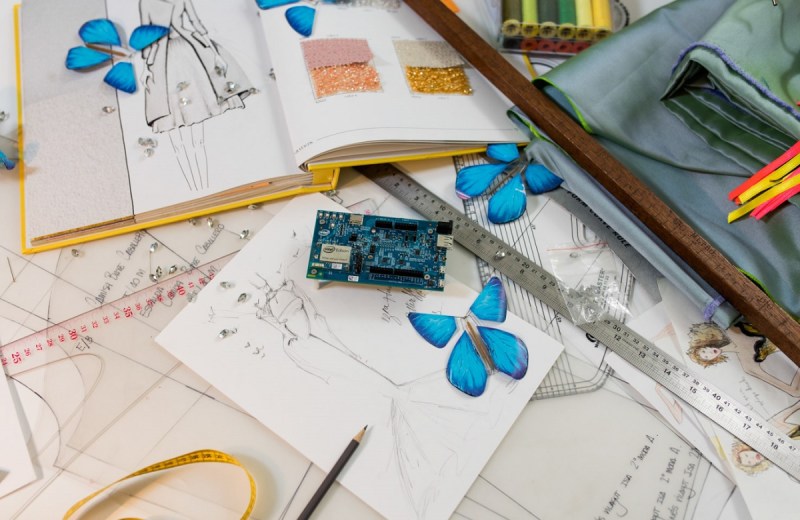 Above: The intelligent butterfly dress uses the Intel Edison module as its brain.

“It’s noteworthy to say that the brand strategy of ‘Intel makes amazing experiences possible’ has become the company’s business strategy,” said Penny Baldwin, vice president and general manager of Intel’s global brand management, in an interview with VentureBeat. “We believe Intel’s longstanding history of being ruthlessly focused on Intel Inside has effectively rendered the brand invisible. We have been trapped inside the box, distanced from the consumer, with no clear role or relationship with the consumer.”

Baldwin added, “Instead of focusing on where we are with Intel Inside, we have elected to focus on why we are. The why lays a direct claim to the amazing experiences we enable outside. We are not abandoning our Inside heritage. We are simply bridging from the inside to the out, and making a direct connection between the role our breakthrough technology plays and the experiences that technology enables.”

Intel is going to emphasize the difference it makes in areas such as gaming, sports, and entertainment through its sponsorship of esports events, as well as through other types of engagement.

“Part of our strategy is to see this new brand promise at a 30,000-foot level, which is the Amazing Experience campaign, and to pay off that brand promise with experiential activations that clearly highlight the role our technology plays,” Baldwin said. 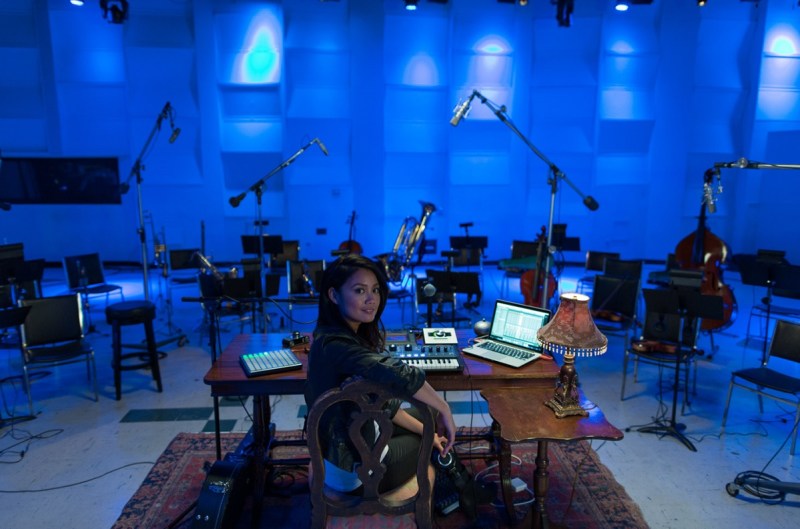 Intel has already announced that it will use the Intel Curie chip at the X Games Aspen 2016 event (from Jan. 28 to Jan. 31). I asked Baldwin if Intel has considered Super Bowl 50, partly because Intel is already quite visible in Levi’s Stadium in Santa Clara, Calif., where Intel is based. But Baldwin said that Intel wasn’t quite ready to ramp up the campaign to the Super Bowl level just yet.

“The ability to incorporate the technology will take a longer time, but it is on the radar,” she said.

In fact, Intel is in active talks with just about every major sports league about using its technology to transform the experience at sports venues. For instance, Intel is embedding BMX stunt bikes with sensors that can capture the motion of the bikes and report real-time analytics on the height or movement of a trick. Intel can analyze the data and give the athlete exactly what they need to know in order to improve performance. Coaches can use that data for more precise coaching. Fans can also see the results in real time, and experience what the athlete sees or feels through special kiosks at sports venues. And Intel wants to implement this kind of technology in every sport, Baldwin said.

Intel also plans to get involved in many other types of events as part of this brand-awareness campaign. The company isn’t saying how much money it will spend on the campaign yet, but Baldwin said, “If you do a major brand relaunch on digital platforms worldwide, the financial commitment is large.” 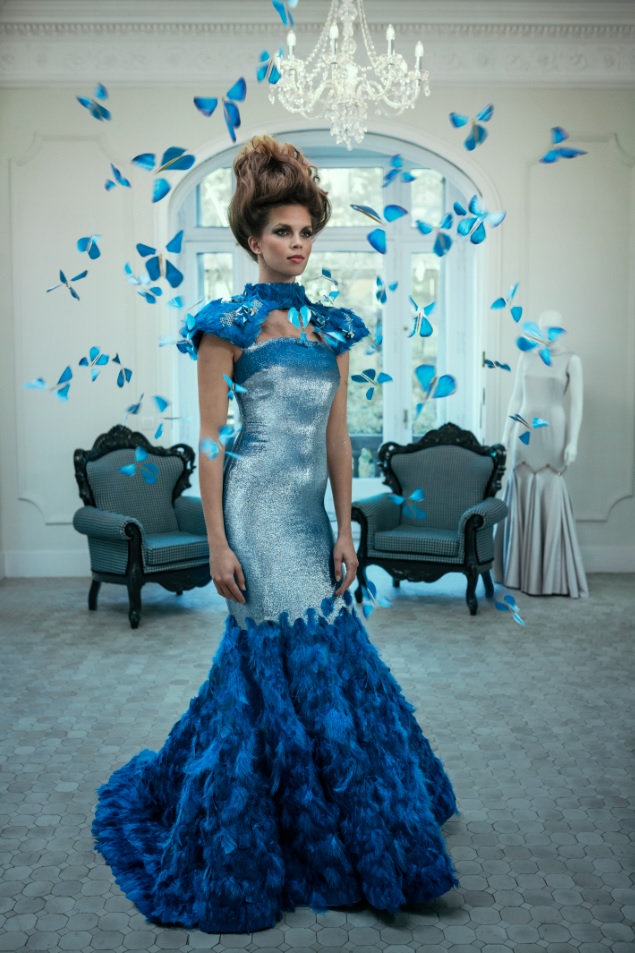 Above: The intelligent butterfly dress is powered by Intel.

One of the coolest visuals in the new ad campaign is of a model wearing an evening dress with blue butterflies pinned to it. It was created by two fashion designers from Turkey — Ezra and Tuba Cetin. The butterflies are actually electronic devices that are powered by Intel’s Edison module for the Internet of Things. As the model walks, the dress responds to touch, body heat, and movement. The butterflies fly off the dress and flutter around the model. The Cetin sisters say they’re excited to be working with Intel on the “intelligent butterfly dress,” as the future of fashion is about to change.

In a part of the ad dubbed Wow, Intel teamed with creative artist Nobumichi Asai to use computer technology to project an amazing array of colors onto Asai’s face, which becomes the canvas for real-time projection art. Another piece of the commercial focuses on dancer Piage Fraser, who performs in front of a projection that captures her movements and turns them into a psychedelic animation. Fraser’s motion is captured by Intel’s RealSense 3D camera technology and Mirada Studios. 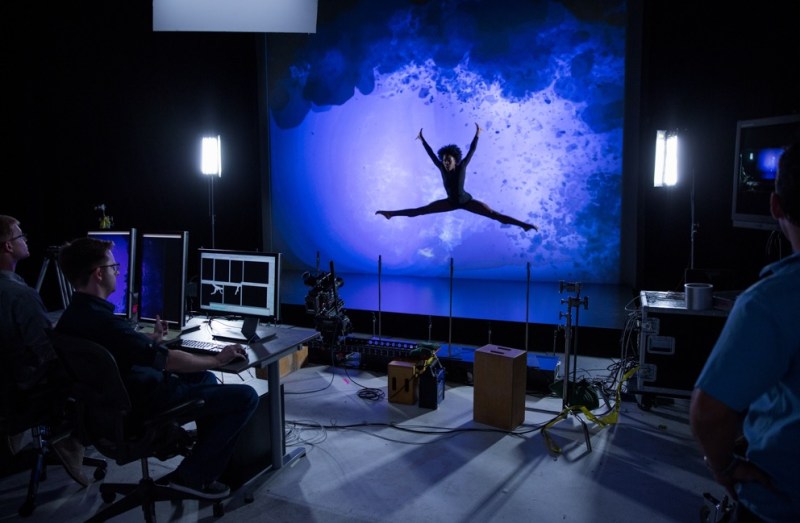 Above: Dancer Paige Fraser’s performance is captured by an Intel RealSense 3D camera.

This focus on “cool” things reflects the transformation of the brand image, but is also in line with Intel’s deeper strategy. Krzanich has talked before about using Intel chips to create Intel-branded products that are sold on the market by Intel or its direct partners. That’s a far cry from simply supplying chips to other companies. Intel’s chip customers may not have the warmest reaction to this shift in strategy, but it’s not so different from how Apple behaves as a vertically integrated company. Intel isn’t going as far in this direction as Apple does, but it is doing a lot more work on the end product than it used to do.

“We have transformed every aspect of marketing under Steve’s leadership,” Baldwin said. “We have changed how we think about Intel Inside, retail, and business to business.”

Intel created the new campaign with the help of ad agency McGarryBowen. But Intel also did a lot of the work itself.

“That’s a component part and we would never walk away from that,” she stressed.

Fund, former top marketer at Staples, joined Intel in May 2014. And Intel hired Baldwin about a year ago. Their work debuts today.

“We have been quietly developing this brand relaunch for a while, elevating the quality and caliber of our communications,” Baldwin said. “But this campaign is starting now.” 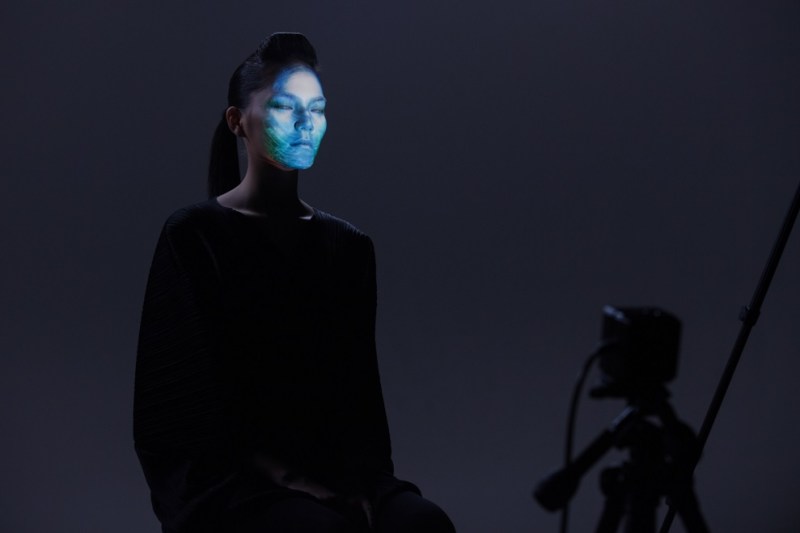 Above: Intel projects colors onto a model’s face in real time.