Ran Senderovitz, vice president of mobile platform marketing at the Intel client computing group, said in a briefing that the eight new 14-nanometer U-Series and Y-Series chips are targeted for productivity in thin-and-light laptops, both in consumer and commercial devices.

“Comet will be the technology that we scale to our commercial products,” he said. 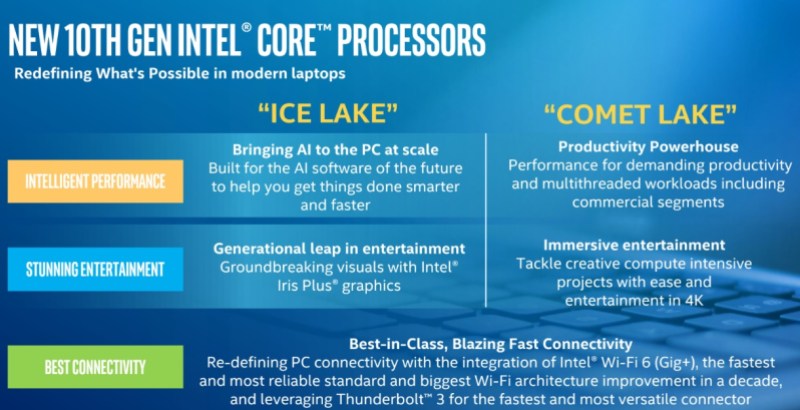 Above: Ice Lake and Comet Lake aren’t the same.

The U-Series chips include Intel’s first six-core processor (12 threads) with faster central processing unit (CPU) frequencies than the prior Ice Lake generation, made with the more advanced 10-nanometer manufacturing.

The processors will be paired with Wi-Fi 6 and Thunderbolt 3 connectivity. More than 90 laptops using the processors will be hitting retail shelves by the holidays, he said. The chips have a power envelope of 15 watts, faster memory interfaces, and Optane memory H10 with solid-state storage.

The new chips are built with 14-nanometer manufacturing technology, not the more advanced 10-nanometer chips coming later this year. But Intel is still calling it “10th Gen,” which could be confusing, as that is what Intel called its recent Ice Lake processors.

Many tens of millions of laptops are sold each year. They run professional, productivity, collaboration, entertainment, gaming, and AI applications.

Intel is also pushing on CPU, GPU, interconnect, wireless, and other technologies, Senderovitz said. The chips range in base frequency from 1.1 GHz to 2.1 GHz, with turbo boost frequencies up to 4.7 GHz.

Comet Lake’s integrated graphics solution has double the performance of the previous generation. It takes the Ice Lake core technology and pushes it higher with higher frequencies and more integration. The Comet Lake chips include i3, i5, and i7 versions, such as the Intel Core i7-10710 U processor.

“Comet Lake is another evolution of our architecture,” Senderovitz said. “There is a 10th generation for everyone.”

Laptops using these devices will have “modern sleep” modes, and more than half the laptops coming will be certified to run Amazon Alexa.

The performance is 16% better than the previous generation on general performance, and it is 41% faster on Microsoft Office. Compared to a five-year-old PC, Comet Lake is 2.5 times to 3 times faster. The Thunderbolt 3 connectivity is 8 times faster than USB 3.0, while the Wi-Fi 6 is 3 times faster.

Ice Lake and Comet Lake chips work in the same thermal envelope, from around 10 watts to 25 watts. Intel said the Comet Lake chips are “tailor made to deliver increased productivity and performance scaling for demanding, multithreaded workloads while still enabling thin-and-light laptop and 2-in-1 designs with uncompromising battery life.” 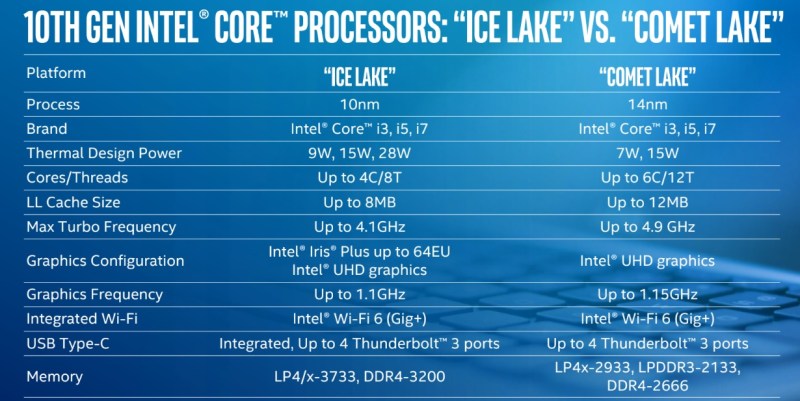 Above: How Comet Lake differs from Ice Lake

Systems with these processors can also support a Thunderbolt 3 controller enabling up to four Thunderbolt 3 ports, each one capable of delivering power and download speeds of 40 Gb/s and connecting to the thousands of docks, displays, and peripherals in the market, all via a single cable. 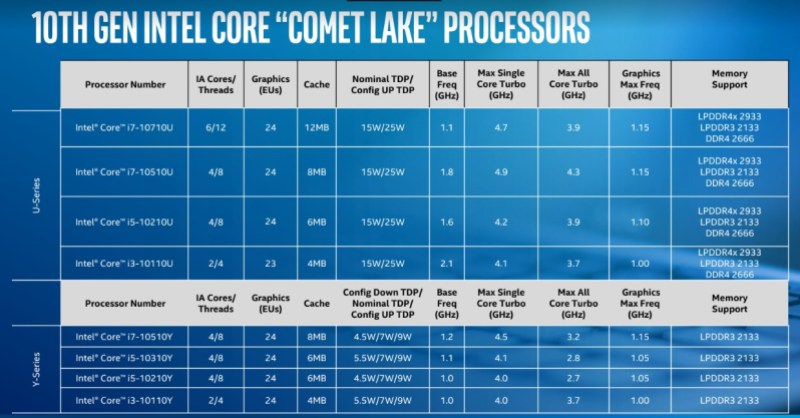