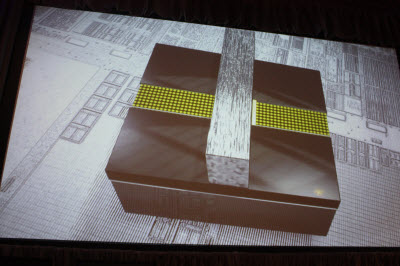 Intel said today that it will build its next generation of chips with 3D structures, a move that will allow it to pack much more computing power into a given space and stay on the path of technological advancement for years to come.

This means that mobile devices such as smartphones and tablet computers will become smaller, faster and cheaper for many years to come, driving the worldwide tech economy at a fast clip. The company made the announcement Wednesday morning at a press conference in San Francisco. The development could give Intel a big lead over its rivals when it comes to manufacturing the latest and fastest computer chips, an advantage that has been key to maintaining its lead as the world’s biggest chip maker. 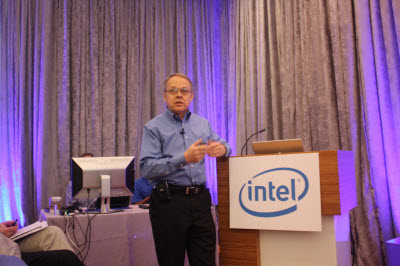 Intel senior fellow Mark Bohr (pictured)  calls the new technology, dubbed Tri-Gate, a “major technical breakthrough and historic innovation” in microprocessors, which are the brains of personal computers. The development will allow Intel to stay on the path of Moore’s Law for years to come.

First observed by Intel chairman emeritus Gordon Moore in 1965, Moore’s Law predicts that chip capacity — a proxy for computing power — will double every two years. But Moore’s Law isn’t a given. It depends on breakthroughs like the one being announced today. 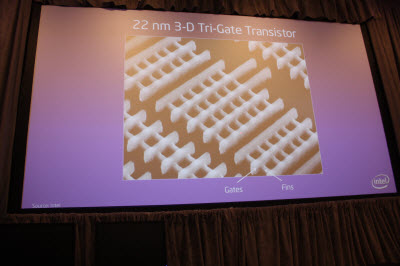 Intel first disclosed it was doing Tri-Gate research in 2002. But it took until now to get it ready for prime time. Intel will use the technology in its 22-nanometer manufacturing process to make a microprocessor code-named Ivy Bridge. A nanometer is a billionth of a meter and Intel currently makes chips with 32-nanometer circuitry.

The idea of 3D isn’t new itself, since all chips consist of layers of materials — insulators or conductors — on top of a base of silicon. But the fundamental unit, the transistor, has always had a structure where electrons moved two-dimensionally from one side to another. But this technology allows Intel to change the direction of the electrons from sideways movement to upward and downward flow as well. That allows Intel more control points where it can turn on or off the flow faster. One by product is that less current leaks out of the structure, resulting in less wasted power.  Intel to build chips higher than it otherwise could.

The result will be better performance and lower costs and lower power consumption. Intel hasn’t made an improvement like this since it introduce High-k metal gate transistors in 2007, something that other chip makers still haven’t matched. Other chip makers may be able to duplicate the research, but it is a matter of spending billions of dollars, lots of time, and making sure they don’t tread on Intel’s intellectual property.

In the move to Tri-Gate transistors, Intel will be able to reduce power consumption by more than 50 percent in a single generation, Bohr said. It will also provide a 37 percent leap in performance.

“Low voltage operation is extremely important,” said Dadi Perlmutter, a senior Intel executive, speaking at the event. “You can bring much better performance capabilities to mobile devices without running out the battery life. This is what Intel is all about.”

The invention will be useful not just for mobile products, but for chips that go into all of Intel’s markets. Chips in data center computers known as servers need to be more power efficient in order to reduce data center electricity usage and air conditioning. For ordinary consumers, it means that users will see better 3D graphics, faster number crunching, and much better multitasking over time.

Intel says that Tri-Gate transistors are a “reinvention of the transistor.” They replace a two-dimensional flat planar gate (basic transistor design) with an incredibly thin three-dimensional silicon fin that rises up vertically from a silicon substrate, or base.

The electrical current is controlled by implementing a switch, or gate, on each of the three sides of the fin — two on each side and one across the top, rather than just one on the top.

Moore said in a statement, “For years we have seen limits to how small transistors can get. This change in the basic structure is a truly revolutionary approach and one that should allow Moore’s Law, and the historic pace of innovation, to continue.