When it comes to diversity, Intel has had a very busy year. Last fall, the company was stung after one of its missteps made it seem like it wasn’t pro diversity. At the beginning of 2015, Intel chief executive Brian Krzanich pledged the world’s biggest chip maker would invest $300 million to increase diversity in the tech industry. Then in June, Krzanich said Intel would invest $125 million in startups owned by women and underrepresented minorities.

Hiring and retention of diverse candidates is now tied to pay. A couple of weeks ago, Intel announced that 43.3 percent of its new hires came from diverse backgrounds, exceeding its goal of 40 percent. Of new employees this year, 35 percent are women and 4.7 percent are African American; 7.5 percent were Hispanic, and 0.3 percent were Native American. At the Intel Developer Forum last week, Intel held a panel on how diversity can create a business advantage for companies.

But measuring diversity isn’t all about the numbers. And any way you look at it, the tech industry has a long way to go. About 3 percent of tech company founders are women in Silicon Valley. Fewer than 1 percent of founders are African American or Latino. Companies with a female CEO receive only 3 percent of total venture capital dollars, said Lisa Lambert, team leader for software and services investments at Intel Capital.

Roz Hudnell, chief diversity officer and vice president of human resources, moderated the panel. We caught up with her after the panel. She pointed out that Intel is also trying to improve the pipeline for diverse candidates, starting with help it is giving to schools in Oakland, California.

“I think we’ll be the game changer,” Hudnell said at the close of the panel. “We have to be the agents of change and we can change ourselves.” 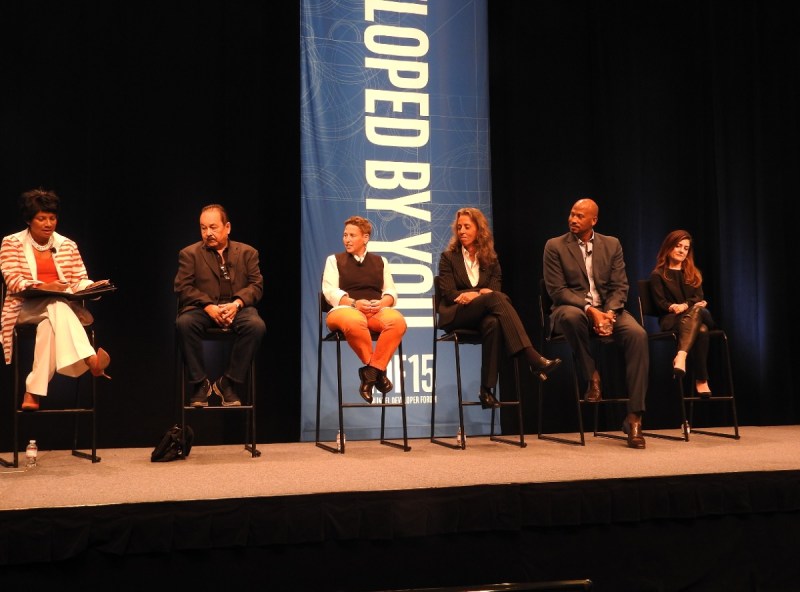 VentureBeat: You’ve been at Intel for a long time.

VentureBeat: Has diversity been a big part of your job during a lot of that time?

Hudnell: Diversity’s been a big part of my life and career. When I came into Intel I was the community relations manager. I sat in our public affairs group, where we did a lot of work with government, community, employee volunteerism, education. Intel has had a long history of focus on getting more women and minorities into STEM. A lot of what we did, especially in communities where Intel was, focused on pipeline efforts. But I didn’t own diversity.

I came to Intel from the Urban League, where I developed job skills training centers. It’s been a part of my life’s work, in some ways, for a long time.

VentureBeat: From a press point of view, I could see this being part of Intel for quite a long time, but moving more front and center since last year. Can you talk about what that’s been like?

Hudnell: In all honesty, that’s not why Intel moved there. It wasn’t because we had a crisis. The industry had a crisis. It caused us to look at where we were. If you think about what was happening last summer, you had Reverend Jackson coming in and challenging companies to do what we’ve been doing for a decade. We could show our data. We didn’t have a crisis about showing data or not showing data.

Under Brian’s leadership, we’ve looked at a lot of things we’ve been doing. At that point, certainly, we had a focus on women in gaming. That was a point for us to think on. But what ended up happening, we stepped back and said just what you said. We have been focused on this for a long time. There were things were proud of, areas where we were leaders in the industry. Brian is an engineer, and he said, “I want to lead on this. What is it going to take?”

That’s when we began to think deeply. It’s not about showing data or putting priorities in place or getting a commitment or setting goals. We’ve been doing that. So maybe our goals aren’t aggressive enough. Maybe we need to bring a larger commitment to move faster and lead the industry. It was more of a leadership moment than simply coping with a crisis. That almost would have been easier. 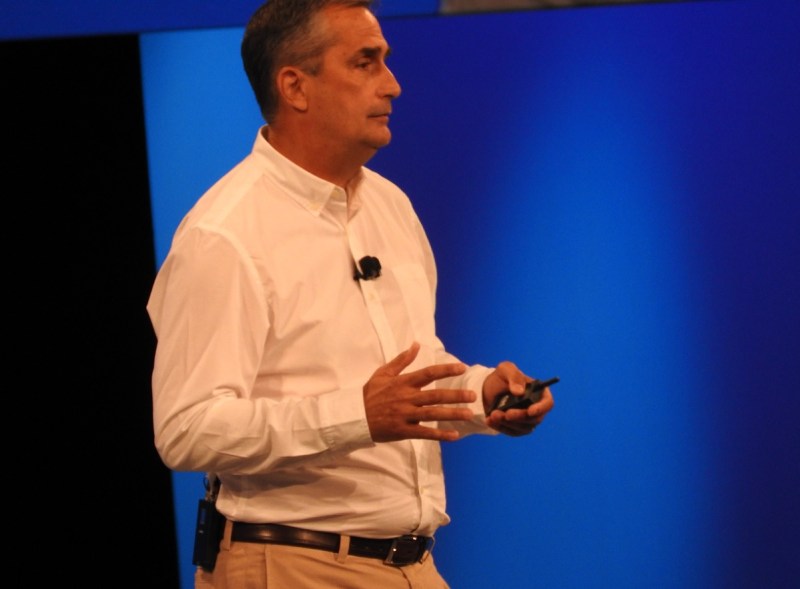 VentureBeat: It seems like a lot of other companies could have that conversation internally as well and get into a big fight about it. How do you do that and come out a unified team?

Hudnell: That’s all about leadership. That’s about having a CEO who has looked at this and — Brian was part of our diversity management review committee for a few years. He didn’t come in as a CEO not thinking about this. He ran our technology manufacturing group. He had been very aware. I don’t want to say it was easier for us, but there was a foundation of the commitment to diversity there. We weren’t starting anew.

We did unconscious bias training eight years ago. We’ve been driving transparency and goals for longer than some companies in this industry have existed. We were starting from a different place. I hope, and I think, that we also had the confidence that we could do it. If we put increased commitment and resources behind the foundation, we could do it.

Because our workforce is so highly technical — engineering, computer science — we drive Moore’s Law. We do high-end manufacturing. We don’t do retail or call centers. In some way, we also recognize that when we show growth and show we can do it, we can lead the industry, because then everybody can.

So it was more of a leadership moment, an inflection point for us as a company, which has been in a leadership role in this industry for so long. It was almost like, from my perspective — what would we do if we didn’t do this? There was no other choice. When the industry is going through a crisis as an industry and you have a company that wants to do something, a company that has a history of leadership in a space we’ve been involved in, you either lead or you don’t. There was no middle ground.

Most of us were pretty shocked — not at how easily, but how swiftly we were able to get to that moment of Brian standing on stage at CES and saying, “We’re going to do this and do it by 2020.” 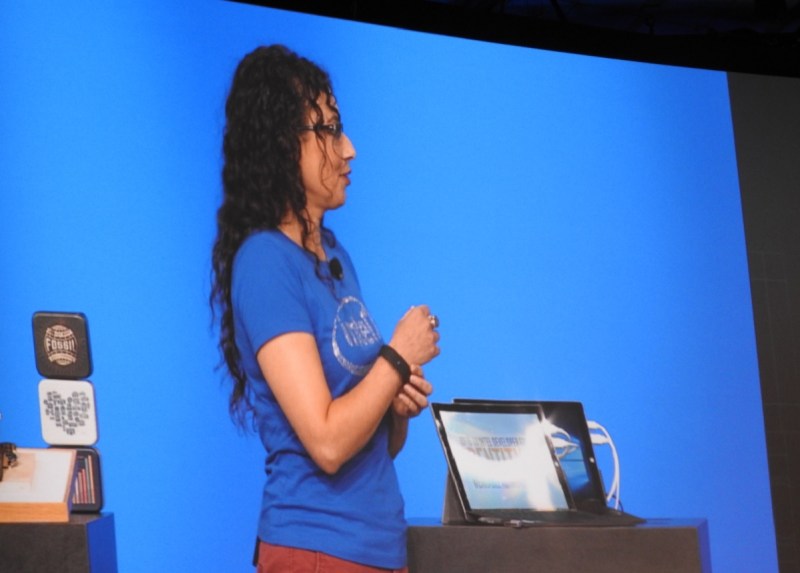 At least for Intel, it’s because — this year close to 80 percent of our hiring is technical. You have to start with, 30 percent of the general U.S. population is black or Hispanic, but that’s not who’s in engineering and computer science classes. Then you say, “Well, it’s a pipeline challenge.” That’s a challenge for the whole nation. If women and ethnic minorities were fully represented in engineering and computer science classrooms, just as they are in society, we would close our nation’s achievement gap.

We also recognized at Intel that we weren’t doing a full enough job working on the pipeline out there. One reason you’re seeing great improvements in our hiring — we didn’t build a bigger pipeline in six months. We got very focused and aggressive about recruiting the talent that was out there. It’s a combination. It’s a matter of doing a better job recruiting the talent that’s developed, keeping that talent, and then increasing the pipeline.

What we’ve done differently, we’re trying to increase the pipeline with intention. You see what we’ve done with Oakland Unified. That’s a bet. Can we take an enormous amount of resources and support and focus and change the outcomes for students from underserved communities, graduating from high school, who want to go into engineering and computer science? That’s why it’s five years. That’s why we start now with the freshmen. Can we make the change in a cohort? Not making the change over 20 years. Can we make a substantive change in a large urban school district?

If we show we can do that, we hope that impacts how we think about education in high schools, how we fund things. That’s different for us. We’ve had a K-12 program. We’ve been focused on education for a long time. But sometimes it’s very long. You go into a third grade or fourth grade class. Here we’re going to keep doing those things that are good for the community, but get really strong on investing in a pipeline that can make a meaningful change for us. That’s now.