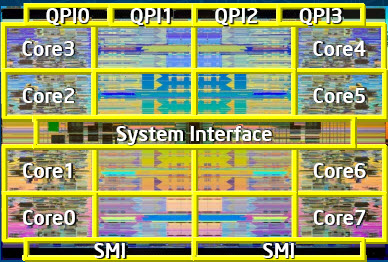 Intel said today that a new Xeon series server chip debuting in the second half of the year will attack the highest end of the server processor market. That means Intel is targeting IBM as well as another division of Intel that sells the Itanium processors.

Since each Nehalem EX chip has eight processing cores, and each core can run two threads of software, each chip can run 16 threads at the same time. (A thread is akin to one program running). Intel will then take each chip and put it into systems with four chips or eight chips each. That means future systems will be able to process 64 or 128 threads at the same time. That’s the kind of processing power that will make the systems competitive with other high-end server chips from IBM.

Boyd Davis, general manager of marketing for the Intel server and workstation division, said the Nehalem EP server launch was extremely successful. He said more than half of Intel’s new server chip sales will be Nehalem EP chips by August.

The upcoming Nehalem EX systems could also give Intel’s other chip series, the 64-bit Itanium, a run for its money. The poor Itanium, introduced in 2001, is still the butt of jokes after it succeeded in grabbing a toehold in the high end of the market but it failed to capture any of the low-end market for chips. Some have nicknamed it the Itanic. It would be a supreme irony if Intel knocks out not only IBM, but Itanium as well.

But Davis defended the Itanium, saying there’s still a good market for it among people who need an enormous amount of computing power. The difference between Itanium and the hybrid 32-bit/64-bit Xeon servers that use the Nehalem chips is mainly a matter of power efficiency.

“We are going to push Xeon as hard as we possibly can, but our expectation is that Itanium will be a great market for many years to come,” Davis said.

The Nehalem designs have received praise because they incorporate a memory controller — which was traditionally part of another system chip — in the microprocessor itself. That allows the microprocessor to talk to different pieces of memory directly, getting rid of severe bottlenecks in the processing of data.

At the same time, the design is more power efficient. Advanced Micro Devices adopted this design in 2003 with the launch of its Opteron processor. It took Intel more than five years to copy the design. Copycat or not, Intel contends it has the fastest server processors now. The market for multi-processor servers is about 6 percent of the overall units in the server market, but it’s a fairly big chunk of the revenues.