The new U-series (formerly code-named Whiskey Lake) and Y-series processors (Amber Lake) are designed for thin-and-light laptops and laptop-tablet combos, or 2-in-1 laptops. The laptops have twice the performance of a five-year-old laptop. They also have faster connectivity, longer battery life, and improved processing for voice services such as Amazon Alexa.

“Intel has been constantly driving to transform the PC and fundamentally changing the way that people use their PCs,” said Karen Regis, director of notebook platform marketing, in a press briefing.

Customers will announce new machines based on the Intel chips. Intel made the announcement at IFA, the big tech trade show this week in Berlin. With the new processors, Intel says it will boost Wi-Fi connectivity speeds up to 12 times with integrated Gigabit Wi-Fi in thin-and-light laptops for the first time. The laptop chips also offer double-digit gains in office productivity for everyday web browsing and light content creation over the previous generation. 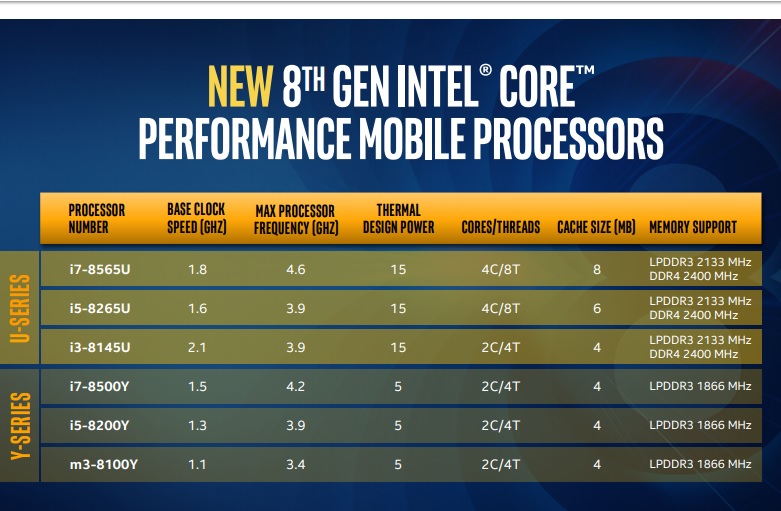 With this kind of performance and connectivity, consumers should be able to download a favorite TV show or movie in under a minute. They can also create, edit, and share 4K 360 videos about 6.5 times faster than before, and stream or play games such as World of Warcraft: Battle for Azeroth or World of Tanks.

“Intel’s new notebook parts are more of an evolution than a revolution compared the prior generation of mobile processors, but for the people who will be buying new notebooks who likely have a four- to five-year-old notebook, this is a bigger deal,” said Patrick Moorhead, analyst at Moor Insights & Strategy. “I’m most excited about the new form factors I expect OEMs to bring out that are a lot thinner and lighter with improved battery life than even the Skylake designs. I am also expecting more designs to support LTE and intelligent assistants like Amazon Alexa.”

The processors come with platform capabilities for improved support for multiple voice services on the U-series and refinements to improve natural input options like touch and stylus for the Y-series. The processors have a 15-watt power envelope and up to four cores and eight threads. Intel is also supporting integrated Gigabit Wi-Fi with Intel Wireless-AC for faster sharing, streaming, and downloading.

Paired with Intel LTE modem options, consumers will have fast connectivity wherever they are.  With the U-series processors, laptops and 2-in-1s can get up to 16 hours of battery life on a single charge, while power-optimized systems can get about 19 hours.