Intel’s third-quarter net income grew 12 percent thanks to a competitive edge over rival Advanced Micro Devices as well as expense cuts. But the technology bellwether painted a fuzzy picture of how the financial crisis will affect demand in the fourth quarter.

Intel’s strategy is always to use its financial might to put pressure on rivals during a downturn. You can expect the company’s posture in this one to be no different. Intel Chief Executive Paul Otellini said he expects the company “to outpace peer companies at a time when business levels are difficult to predict.” On Intel’s side: Growth of laptops and the ever-spreading use of the web.

Aside: Intel’s conference call started with a hilarious echo that turned Otellini’s voice into a kind of echoing and vibrating robot sound. Then the sound came back online. Otellini joked, “Let me apologize for that glitch. That system probably doesn’t have Intel product in it.” 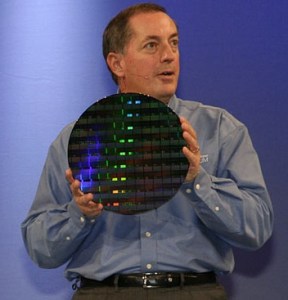 He said that the financial crisis had caused “signs of stress” in the business but it is difficult to quantify and the outlook is mixed. He noted that consumer sales appear to be light overall, but demand for laptops and “net books” is strong. Corporate sales were softer than usual, while consumer sales were seasonal.

Net books are handheld, more limited computers for surfing the web. Intel will offer a rare mid-quarter update on Dec. 4 to clarify how the quarter is going. In the third quarter, Intel sold $200 million of its new Atom microprocessors for handheld, ultramobile PCs.

The Atom processors are aimed at gadgets, dubbed mobile Internet devices, which can access the web wirelessly. Otelini said Atom sales were off to a good start. Without Atom, microprocessor sales were flat and overall prices per microprocessor were down from the prior quarter.

Otellini said that the company was already well prepared for a downturn since its headcount is 20,000 lower than the peak in 2006 and the company has cut $3 billion in expenses. He also said the company has $12 billion in cash. (That’s enough to pay for about four giant chip factories). Intel had allowed itself to grow too large and diverse, so Otellini refocused the company on its core chip business.

Shares rose 4.65 percent to $16.70 a share in after-hours trading. (That’s down a third since the start of September). The world’s largest chip maker reported net income of $2.01 billion, or 35 cents a share, up from $1.79 billion, or 30 cents a share, a year earlier. The results included a net $162 million write-down of Intel’s investment in Numonyx, a flash-memory joint venture with STMicroelectronics. A year earlier, the included $125 million in restructuring and asset-impairment charges. Revenues rose 1.3 percent to $10.22 billion. In July, Intel predicted revenue of $10 billion to $10.6 billion.

The company has had a heavy investment in overseas chip sales for a long time. It reported growth in all regions, except North America, where sales fell 8.7 percent. Intel expects fourth-quarter revenue of $10.1 billion to $10.9 billion. Analysts expected $10.77 billion in the fourth quarter. Inventories are flat, with the Taiwanese and channel customers cutting back and computer makers building inventory.

Asked how bad it could get, Otellini said the range of revenue was broader than ever before because of the uncertainty. He said that gross margin percentage is expected to be 59 percent, plus or minus two percentage points. That’s fairly typical for Intel, meaning that the company isn’t counting on the world falling apart.

Otellini said he would not comment on the legal ramifications of the recent changes at Advanced Micro Devices, which is splitting itself into two companies. As far as competition goes, he said the changes at AMD have not changed the fundamental dynamics of the industry. Consequently, he said that Intel would not change its competitive strategy.

“This is not a post dotcom kind of downturn,” Otellini said. “People stopped buying computers, particularly because so much was available on eBay because” of companies that shut down. “I think this will have a different pattern. I’m of the opinion that technology will do well during a downturn because we sell tools that lift productivity.”

Come November, Intel will launch a new generation of microprocessors, dubbed Nehalem. These new chips have a better memory design that should help erase an architectural advantage that AMD has had for more than five years. Or so Intel says.